Welcome back to this month’s installment of our ongoing series where we find the best iOS apps and the best macOS apps for you. Not to brag or anything, but this is one of the best months for this series in a while! I don’t even know why I’m bragging – I didn’t do any of the work to make these amazing apps.

This month, we’re going to be covering an app that lets you write and test code on your iPhone, one that allows you to listen to Apple Music on a Windows computer, and the fastest window snapper in the west (seriously, you’ll want to check this last one out!).

If you’re new to this series, it’s a monthly segment here on AppleToolBox where I collect a handful of the best apps available on iPhone and Mac. I’m a bit of an app hoarder, so this gives me a place to share my favorite apps with you.

Unlike other “best apps” lists you’ll find on the internet, the majority of the apps shown here are going to be ones you haven’t heard of. That’s because I go out of my way to find new and independent apps that are of great quality and usefulness. I’m not sponsored by any of these apps or their developers, so these are always my honest picks for the month.

If you like this series, be sure to check in each month here at ATB for the next in the series! And don’t hesitate to go back through older posts, too. I always strive to find the best apps around the web, so there’s a lot of gold in those old posts.

Alright, let’s get to it!

First on today’s list of the best iOS apps is a fun one. Smol Dungeon is an old-school dungeon crawler for your iPhone. For those who don’t know what a dungeon crawler is, it’s a type of video game where you move through a dungeon slaying little monsters, collecting items, and eventually making your way to the end. 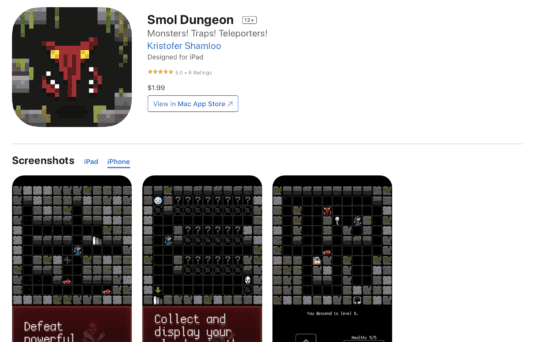 Smol Dungeon has it all! It comes with monsters, traps, and teleporters, a classic feeling control set, one-handed gameplay, no ads or in-app purchases, achievements, a clock to time your runs, and best of all, blood!

This game was developed by a single developer, so it’s a true indie app. It’s only $1.99, which is nothing, especially if you’re someone who already loves this type of game. Get away from the boring swipe-and-match tile games or test tube sorters and give this pixel-y throwback a go – if you dare!

2. Juno: A fully-featured IDE in your pocket

Next on our list of the best iOS apps is Juno. This one’s for the developers. I recently wrote a post covering the best IDE apps for Mac, and today, we’re going to be covering one of the best (and only) for iPhone. 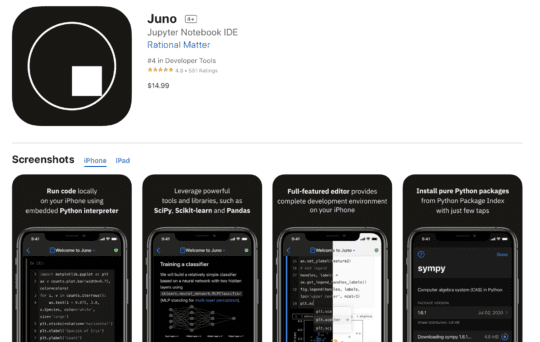 Juno is a fully-featured Jupyter IDE that you can bring with you on the go. Now, it’s still pretty limited when compared to a desktop IDE, make no mistake. But for writing code in Python, it’s pretty solid. It has a built-in Python interpreter, so you can even run basic code, use a few packages and libraries, and save your code for revisiting later.

While I wouldn’t recommend making iPhone your new development environment, this is a great way to test ideas, pass the time when you’re bored, and sketch out some code when you’re away from your computer. And if you use the iPad version of this app, you can even create multiple windows.

I haven’t used this app personally, but it’s very highly reviewed and seems like a legitimate option for coding on your smartphone, which is a crazy idea to begin with. It’s $14.99, but that covers everything this app has to offer. So not too bad!

Another great app in this list of the best iOS apps for April is Make It True Solve Circuits (MITSC). This is another nerdy game for your iPhone, though a lot more technical than Smol Dungeon. 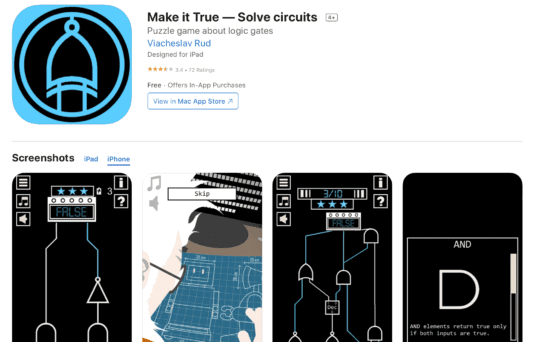 That’s as best as I can explain it in one sentence, but it’s a super fascinating concept and one that anyone who’s programmed before will be familiar with. It’s a great way to test your knowledge and improve your Boolean skills. Plus it’s just a ton of fun! It’s all of the creative fun that comes with programming without the frustration. It’s free to try so give it a look!

The last app on our list of the best iOS apps is Barcodes. This is a variation of an app that I used to have a long time ago with an emphasis on privacy. And it brings a feature to your iPhone that you’re surely missing. 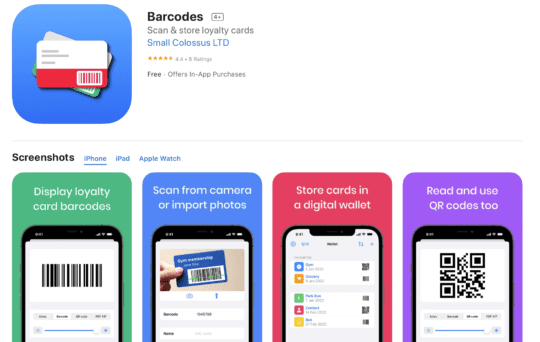 That feature is the ability to add loyalty cards, membership cards, and QR codes to the Wallet app on your iPhone. I don’t about you, but the Wallet app is one of my favorite apps on my iPhone. It’s easy to access at any time and makes it nearly impossible to lose important documents and IDs like tickets and credit cards.

So having the option to add anything with a barcode or QR code to the Wallet app is awesome. This app lets you do just that. You can the QR code or barcode into the app, customize it with some colors and symbols so you know what the barcode is for, then add it to your Wallet.

This feature is unique among apps like this in that it’s privacy-centric. It does have ads (which you can pay to remove). The ads, however, are through Not Evil Ads which focuses on providing ads that don’t use your data. So it’s a great app supporting a great cause. Check it out!

1. SelfControl: Manage the time you spend on your devices with greater control

And that brings us to the best macOS apps. Let’s start with one that I can’t believe I haven’t included before, SelfControl. I’ve been using this app since 2018 and think a lot of you are going to hate it.

This isn’t like Screen Time, Apple’s built-in feature which kind of does the same thing. You can’t bypass SelfControl with a passcode or anything else. Once it’s going, you just have to wait.

It’s a great option for those (like me) who have poor self-control. This app helps me get off of Reddit, the news, YouTube, or whatever else is eating at my time or brain. It’s free to use, is super simple, and does what it’s supposed to a little too well. Give it a shot!

2. Tiny Translate: Quickly translate any language in your Menu Bar

The next of the best macOS apps I want to point in your direction is Tiny Translate. I just found this app recently and think it’s simply ingenious.

As the name implies, this is a tiny translator for your Mac. It sits in your Menu Bar, and whenever you need it, you can ask it to translate some text for you. It’s fast, effective, and very well supported.

It has a lot of features built into it as well. Features like supporting any number of languages from 108 options, changing the color and font, and translating text in images. You can even use your voice if you like.

Tiny Translate is free to download, though there are in-app purchases as you start to use it more. Still, it’s super affordable, and if you know you’re someone who’s going to use something like this regularly, grab it!

3. Cider: Listen to Apple Music without an Apple device

Another one of the best macOS apps worth covering in this month’s list is Cider. Cider is another Apple Music skin (we’ve covered these types of apps before). This one is pretty unique, though. 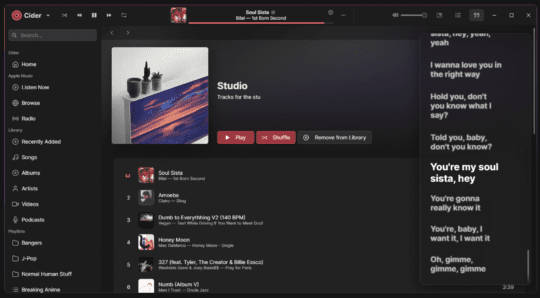 What makes Cider so unique is that it works on all desktop platforms. That includes Windows and Linux. Yep, you can use this app to log into your Apple Music account and listen to your library without being on one of your Apple devices.

I didn’t even know this was possible, but Cider is a fully-fledged app that provides this feature. It looks great, arguably better than Apple Music, and offers an excellent listening experience. If you’re someone who doesn’t have a Mac or switches between a Mac and a non-Mac computer regularly, you’ll love this.

4. Rectangle: The fastest window snapper in the west

And that brings us to the last app on this list of the best iOS apps and the best macOS apps, which is Rectangle. I hinted at this app at the beginning of this post and I’m stoked to share it with you now. 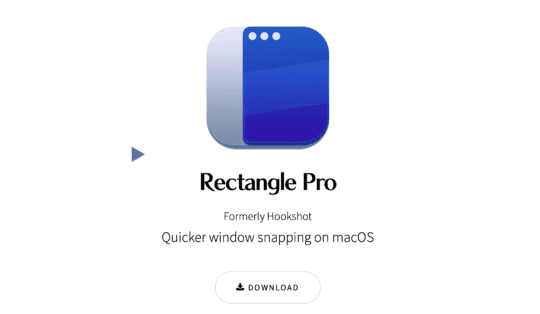 Several apps allow you to snap windows on your Mac since this feature wasn’t built-in for a long time and is still pretty limited. I’ve been using Magnet to make this happen since the day I got my first Mac, but today, I deleted Magnet from my computer.

Rectangle is that good. It allows you to hold a combination of modifier keys (or even a single modifier key) and instantly move an app or set of apps around your desktop. You just hover your mouse over the app you want to move, hold the modifier key, then flick your mouse in the direction you want the app to go. Let go of the key and the window will pop into place.

Not only is this a lightning fast, no-shortcut-memorizations-required method for doing this, but it works with everything. It doesn’t matter if the apps are can’t be expanded or shrunk, they move to the right position anyway. You can also snap windows in place just like with any other solution.

And if you want, you can create preset window locations for multiple windows, then automatically jump all those windows into position with a single shortcut. There’s scripting, too, and a bunch of other great features.

This app is only $9.99, is free to try, and is actively being improved on. It’s the exact kind of app I love to promote in this series. Seriously, check this one out!

Have any best iOS apps or best macOS apps you want to share?

And that’s it! Those are the best iOS apps and the best macOS apps for April 2022. I hope they lived up to the hype! I never thought an app could dethrone Magnet for me, but Rectangle has done just that. And it was great to finally share SelfControl in this series.