Welcome to another installment in the AppleToolBox best-of series! This hot, hot July, we’re going to be cooling off by going indoors and trying out some of the best iOS apps and the best macOS apps.

As always, I’ve done my best to pick exciting and useful apps that you probably haven’t heard of. We’re going to be looking at apps that allow you to play YouTube videos on your wrist, save and share your family recipes, make use of your new MacBook’s notch, and even replace Finder, one of the core macOS apps.

And of course, I am not affiliated with any of these apps. All of the opinions in this post are my own. So without further ado, let’s get into it!

1. Cartridge: An organizational tool for gamers

For those who love video games (and let’s be honest, that’s just about all of us) there’s Cartridge. This is the first app on our list of the best iOS apps, and for good reason. It’s an organizational tool that will help you catalog and track all of your video games with ease. 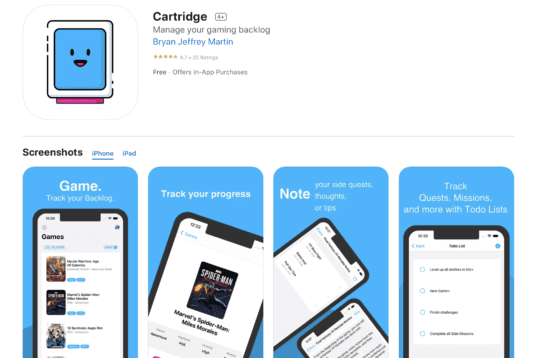 Basically, every time you get a new game, you add it to your Cartridge library. You can also add your existing games, so you can easily view your entire gaming library without needing to physically go through it.

Not only does this have the benefit of keeping you from buying repeat games or feeling like you have nothing to play, but it also opens up some interesting possibilities. For instance, you can use Cartridge to create to-do lists for each of your games. Want to beat Spider-Man in NG+? What about building an automatic farm in Minecraft? Cartridge makes it easy to create, track, and eventually complete these goals.

This app is free for the first ten games you add to it. After that, there’s a one-time purchase that will unlock the rest of the app, allowing you to add as many games as you like forever. If you love video games, this is a must-have!

For the Apple Watch users out there, there’s WatchTube. This next suggestion on our list of the best iOS apps is super straightforward. It’s an app that allows you to watch YouTube videos on your Apple Watch. 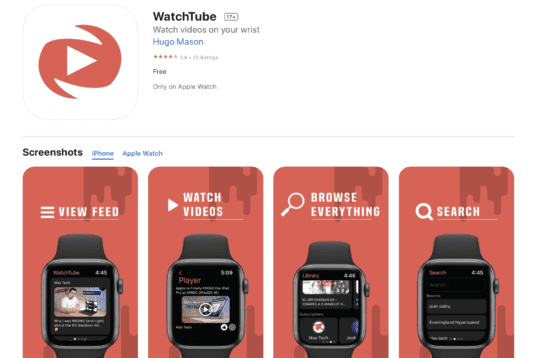 More than that, though, you can also view your Subscription box, search for videos, or simply browse your homepage. It’s that simple! Imagine if YouTube made an app for the Apple Watch – this would be it.

You might think that this app would be pretty limited, and in some ways, it is. But it’s surprisingly feature-packed for being such a small app. You can like videos, turn on captions, subscribe to channels, and more. It’s like a mini-YouTube wherever you go. If you love watching videos on YouTube or just want to have them available wherever you are, give WatchTube a go!

3. Pestle: Save, share, and personalize recipes with one of the best iOS apps

Whether you’re a professional cook or just a hobbyist, cooking is a great hobby for your spirit and your body (well, sometimes anyway!). However, you may have run into the problem of having recipes scattered everywhere. In your Photos app, in a notebook, on YouTube, bookmarked in Safari, and so on. 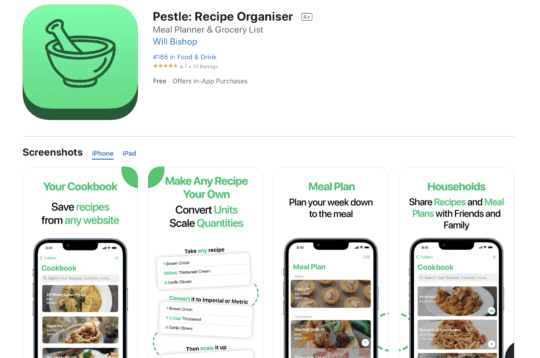 Pestle is here to get you organized. It allows you to save links to recipes you’ve found online or add new recipes that you’ve created. And when you do save recipes from the internet, you can customize the measurements or ingredients to suit your tastes and family size.

Additionally, Pestle allows you to share recipes automatically with other users of the apps, making it a great way to share recipes between your family and friends. And if you are into meal planning, you can organize your saved recipes for that as well.

All in all this is a great, feature-packed app that cooks are sure to love. If this sounds like one of the best iOS apps to you, give it a look!

4. QuickScan: One of the best documents scanners around

Alright, I’ll admit it, a document scanning app isn’t exactly the most exciting app that could have made it on this list of the best iOS apps. That being said, this is and excellent app that most of us could probably use. And best of all, it’s totally free, with nary an ad. 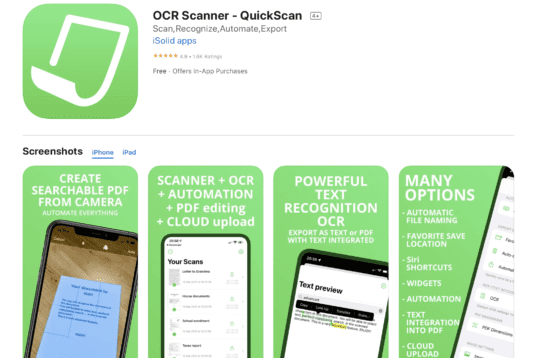 QuickScan makes it easy to save and store real-world and digital documents, digitally. It also includes text recognition, so you can highlight text in documents, search through them based on the text they can contain, and more.

You can even use QuickScan for automation purposes, which can be pretty powerful. In short, this might be the best document scanner on the App Store, it has a passionate developer, and it’s constantly seeing updates. So if that sounds like the kind of thing you need, check this one out!

1. DEVONthink: Upgrade Finder on all of your devices with one of the best macOS apps

With the best iOS apps out of the way, it’s time to cover the best macOS apps. And what better way to kick that off than with DEVONthink.

You may have never given it much thought (I certainly hadn’t before finding out about this app) but Finder for macOS rarely sees in major upgrades or new features, despite being one of the core macOS apps. 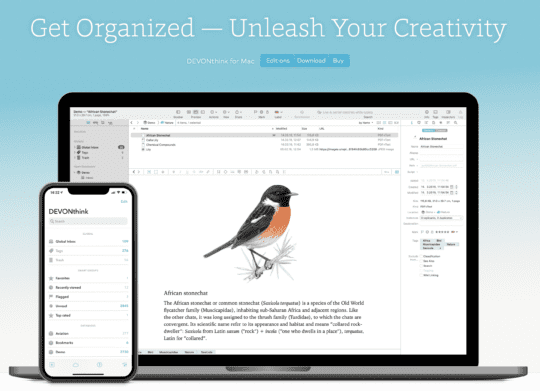 The idea behind DEVONthink is to create a new version of Finder that is more powerful, more organized, more automatic, more secure, and more available. It has nearly all of the same core features, but comes with some extra ones that will empower users (especially professionals).

Here’s a quick list of the features that DEVONthink has to over:

It’s available on Mac, iPhone, and iPad, so you can take your files with you wherever you go. So you get all of these great features, all of the time.

The one drawback of DEVONthink is that it’s pretty expensive. It starts at $99 for standard users and goes up from there. But there’s a generous free trial, so you can give it a go before making the jump!

With so many SaaS apps available these days, most of us use more than a few web apps daily. For those that don’t know, a web app is just like any other app, but it’s only available on a browser. Netflix, for instance, doesn’t have a Mac app. You have to go to the Netflix website to use the Netflix app on your computer. 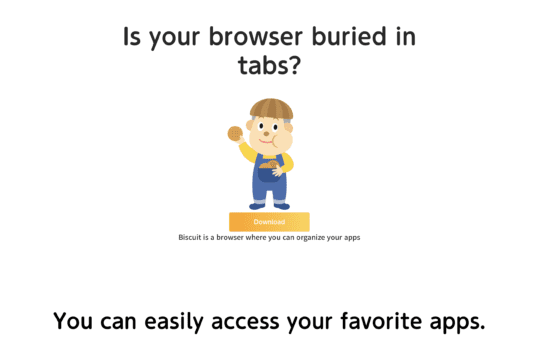 The problem with this is that it can lead to us having several tabs open just to use various online apps. As a freelancer, I know I’ve had this problem in the past.

That’s where Biscuit, the next suggestion on our list of the best macOS apps, comes in. It’s an app that allows you to turn your favorite web apps into regular apps. Just open their links in Biscuit, and they’ll all be contained in one location. This frees up your Safari tabs and gives you new opportunities within your workflow.

Like many of the apps on this month’s list, Biscuit is completely free. So if it sounds like something that will help keep you productive, check it out!

3. TopDrop: Turn your MacBook’s notch into a feature

The recent MacBooks have made a controversial design decision. That decision has been to take the notch from the iPhone and copy it to the Mac. While only a few Macs have this notch right now, we’ll likely see it spread across the Mac lineup over time. 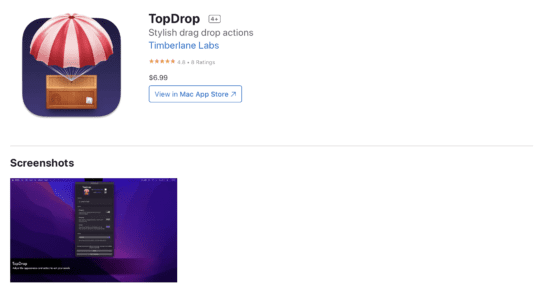 While it doesn’t annoy all users, it’s fair to say that a large number of Mac users aren’t happy about this decision. Luckily, there’s an app for that. Kind of.

However you decide to use TopDrop, it’s safe to say that it makes the notch on your Mac something special and useful rather than an eyesore. It’s just $6.99, so if you’re looking to get a little more functionality out of your Mac, give it a go!

4. BarTranslate: Translate any text from anywhere

Last on our list of the best macOS apps is BarTranslate. It’s a Menu Bar utility that can make your life a lot more convenient. 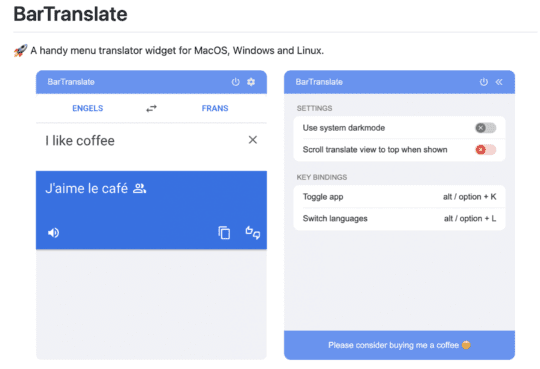 In essence, this app allows you to translate from one language to another without needing to visit a website or open any apps. It’s convenient, fast, and reliable. And because it’s in the Menu Bar, you can access it from anywhere on your Mac.

It’s also free! The only real drawback of BarTranslate is that it’s on GitHub, so you may need a bit of technical know-how to install it. It does have directions on its GitHub page, though, so be sure to read that for information.

And that’s it! That’s this month’s suggestions for the best iOS apps and the best macOS apps. My personal favorites for this month are definitely TopDrop, DEVONthink, and Pestle. Let me know which are your favorites in the comments below!

And be sure to tune in next month for more app suggestions here at AppleToolBox.