You are here: Home / How-to / How To Watch Fitness+ On iPad, iPhone, Mac, and Apple TV

It’s been over a month since the world began to watch Fitness+ to improve their overall health. I’ve been using it as well – it’s become a part of my daily routine.

When I first downloaded it, however, I did run into a roadblock right off the bat. And that was trying to figure out how to find and watch the workout videos. On the iPhone, it was pretty easy to piece together, but on my iPad and Mac, I didn’t have any apps for fitness at all.

In this post, I’ll show you how to watch Fitness+ on all of your Apple devices, as well as answer some other questions you might have about the service (like what to do when your Apple Watch won’t connect to Fitness+).

How to watch Fitness+ on all of your devices

How to watch Fitness+ on iPhone

Watching Fitness+ on iPhone is probably the easiest it gets on any of your devices. First, you’ll need to download the Fitness app, which is available for free on the iOS App Store. If you own an Apple Watch, you probably already have this app downloaded to your phone.

Once installed, launch the app. At the bottom of the screen, you’ll see three tabs: Summary, Fitness+, and Sharing. As you can probably guess, you’re going to want to click the middle one, Fitness+.

Once you do, you’ll be greeted by the library of videos currently available on Fitness+. New videos are added each week, so before long, there will so many videos on there you’ll never run out. You can use the filters at the top of the screen to choose videos by workout type, trainer, and length. At the time of writing, there isn’t a search feature in the app.

How to watch Fitness+ on iPad

Things are a little different on the iPad. That’s because, unlike the iPhone, Apple has never released a fitness app for the iPad. So it isn’t like the iPhone where you probably already had this app downloaded. You’re going to have to seek it out.

To do this, open the App Store on your iPad and search for “Fitness“. The app will have the same icon as it does on the iPhone. 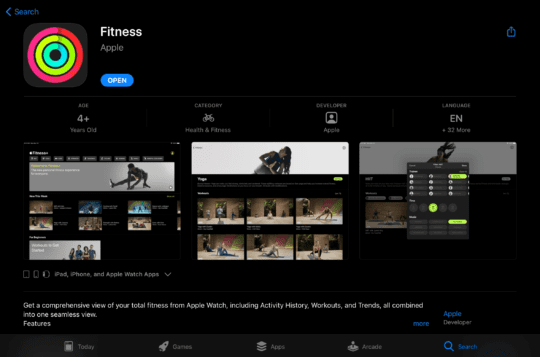 Once downloaded, launch the Fitness app. Unlike its iPhone counterpart, the iPad version of the Fitness app doesn’t have any tabs at the bottom of the screen. 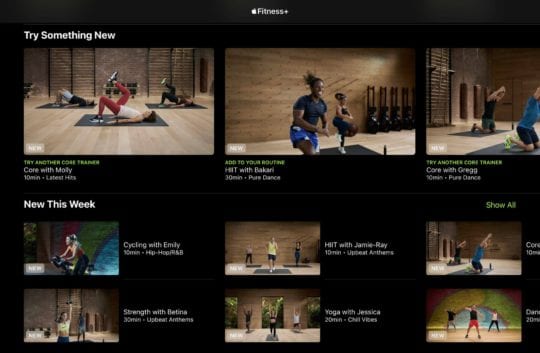 This version of the app might as well be called “Fitness+” because that’s all it offers. The Sharing and Summary tabs are only available on the iPhone version.

While that may not sound like a problem to most users, iPad users who don’t own an iPhone or Apple Watch won’t be able to view their workout summaries. This means you won’t be able to scroll back through your history and see past workouts and performance during these workouts.

For this reason, I recommend taking a screenshot of your performance at the end of each Fitness+ workout on iPad for users who don’t own an iPhone. Otherwise, you’ll have little insight into how or if you’re improving.

How to watch Fitness+ on Apple TV

For Apple TV users, the Fitness app was automatically installed with tvOS 14.3. So if you’re running the latest update of tvOS on Apple TV, you should see the same Fitness app in your app catalog. In addition to being on this latest update, you need to also have either the:

If you’re using an older model of Apple TV, you might not be able to use Fitness+. If you’re unsure if you fall under this category, reach out to Apple customer support – they’ll be able to check on this for you in just a few minutes.

For those who do see the Fitness app on Apple TV, launch it. Make sure that you’re logged in as yourself if you have multiple users on your Apple TV. To do so, select the name in the top-left corner and choose (or add) your account.

Once that’s done, choose the workout you want to use and get going! Like the iPad version of the app, there isn’t a Summary or Sharing section, so you won’t be able to view your workout history like you can on iPhone.

Can you watch Fitness+ on Mac?

Sadly, it doesn’t look like there’s any way to watch Fitness+ on Mac at this time. There isn’t a Fitness app on the Mac yet, and I couldn’t get the Fitness+ videos to stream to my Mac over AirPlay.

This is a shame since, for many, their Mac is their primary media device outside of their iPhone. Hopefully, Apple comes out with a Fitness app for Mac, or at the very least opens up AirPlay for this purpose.

I will say, though, that if you’re clever, you can probably solve this problem. I imagine that there are third-party apps available that will mirror your iPhone or iPad to your Mac, which will give you a substitute in the meantime.

Before we close, I wanted to touch on a problem that I and others encountered when using Fitness+. When I first launched the Fitness app and tried to start a workout, the Fitness+ app would not detect my Apple Watch, even though it was on my wrist, inches from my iPhone.

If none of these solutions work, then it’s probably time to contact Apple support. Best of luck!

What is Apple Fitness+?

Apple’s Fitness+ is a recently-launched streaming service for workout videos. For $10/month, users get access to videos from a plethora of expert trainers over categories like core, strength, cycling, yoga, and dance. The app syncs with your Apple Watch to provide greater insights into your performance.

What equipment do you need for Fitness+?

For the vast majority of Fitness+ exercises, you don’t need any equipment whatsoever, except enough space to move around. However, for some, you might need dumbbells, mats, or more expensive equipment, like an indoor bike. Check out this guide for more details.

Do you have to have an Apple Watch to use Fitness+?

You do not need an Apple Watch to use Fitness+. However, you do need to at least own an iPhone, iPad, or Apple TV to stream the service. Apple Watch does add a lot of depth to the service, but you can still complete the workouts without one.