You are here: Home / News / What Is Apple Pay Later?

During WWDC22 this Monday, Apple unveiled a whole host of exciting new features that are coming to iOS. You can view all of these features right here, in case you missed this post! Today, we’re going to be focusing on one specific feature: Apple Pay Later.

This is a new Apple Pay feature that will allow people to pay for purchases over time, a type of service that’s grown in popularity in recent times. So let’s look at how this feature works, when it will be available, and what it means for Apple.

What is Apple Pay Later?

As mentioned, Apple Pay Later is a feature that allows Apple users to pay for a purchase over a series of weeks rather than all at once. For instance, if you make a $200 purchase, you can pay $100 today, another $100 in two weeks, and so on until it’s paid off.

There are no fees or interest rates as far as we can tell. That means you can use it without being penalized, which is pretty cool. Each Apple Pay Later purchase will be divided into four payments, split up over six weeks.

And that’s more or less all we know right now! There’s been no information on whether this feature will have a minimum or maximum, whether it’ll only be online or work with in-store purchases, etc. We expect to get more details when it rolls out later this year.

How to use Apple Pay Later

From what we can tell, using Apple Pay Later is super easy. You just choose Apple Pay at checkout, and you’ll get an option to pay now or pay later. This feature will be completely handled on Apple’s end, so websites and shops won’t need to do anything to make this feature available. It’ll “just work”.

You’ll pay for a quarter of the purchase up front whenever you choose Apple Pay Later, then pay another quarter in two weeks, then another in two weeks, and again until it’s completely paid off.

It looks like this feature will be made possible in part by Goldman Sachs, which Apple has partnered with in the past to make the Apple Card available. So we can assume that it’s part of a growing suite of services the two are working to put out. 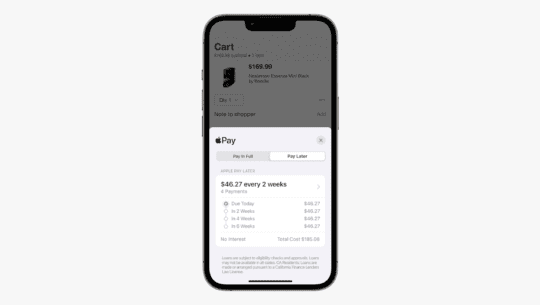 Of course, Apple isn’t the first business to offer “pay later” services. Other businesses have been providing these services as of late, and several third-party pay-later services have arisen in the past two to three years.

While this feature is a major convenience and boon to those with limited finical resources, it’s hard not to notice that its popularity is a direct result of the negative economic climate we currently find ourselves in. It’s an interesting product of our time.

Hopefully, in the future, we see the need for features like this disappear, as they’re mostly a band-aid for a larger issue. That said, many people could use a band-aid right now, and I hope this feature helps improve the purchasing power of individuals without penalizing them.

When will Apple Pay Later be available?

Apple Pay Later is slated to be released with iOS 16 as far as we can tell. That will come this Fall, around September, if past years are any indication. That said, certain features are delayed every year, and Apple Pay Later might be one of these features.

If you’d like to access this feature sooner, however, then you can sign up for Apple’s iOS beta program. Do be aware that beta software can be extremely buggy, and you’re always risking losing data and/or bricking your device.

Additionally, just because a beta is released, it doesn’t mean that this feature will be available with it. So proceed with caution!

Apple Pay Later is definitely not the same as Apple Card monthly installments, although the two features are pretty similar. For those that don’t know, Apple Card users can purchase certain Apple products and pay for them over time.

You can choose how the payments are split up, so it depends on what you’re buying and how much it costs. Additionally, Apple Card payments are lumped in with the rest of your Apple Card balance, so they can accrue interest if not paid on time.

From what I can tell, Apple Pay Later seems like a smaller, more widely available version of the more “hardcore” Apple Card monthly installments. 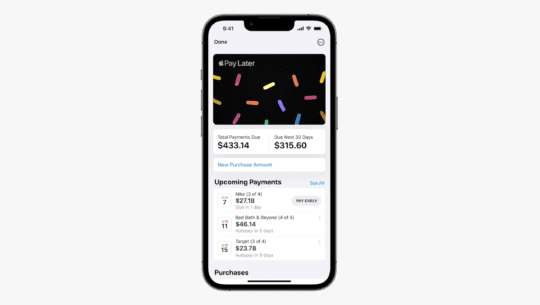 Apple’s foray into the world of finance continues

It seemed like a very odd move in 2019 when Apple announced that it would be releasing its own credit card. However, that decision has proven to be a good one. And it seems Apple is only moving further and further into the financial space.

While much of what Apple’s financial features have to offer are great, they do come with the somewhat dour realization that this is just another tool used to lock users into the Apple ecosystem. After all, it’ll be harder to ditch your iPhone whenever your credit card and Apple Pay Later payments are tied up with it.

Time will tell if this financial trend continues to stick for the tech giant. Hopefully, it results in more beneficial features being released for users rather than predatory ones.

What are your thoughts on Apple Pay Later?

And that’s it! That’s everything there is to know about Apple Pay Later. This new and interesting feature was a surprise, but it seems in line with the direction Apple is moving in. Let us know what you think about it in the comments below!