You are here: Home / iPad / What’s the Difference Between iPad, iPad Air, and iPad Pro? 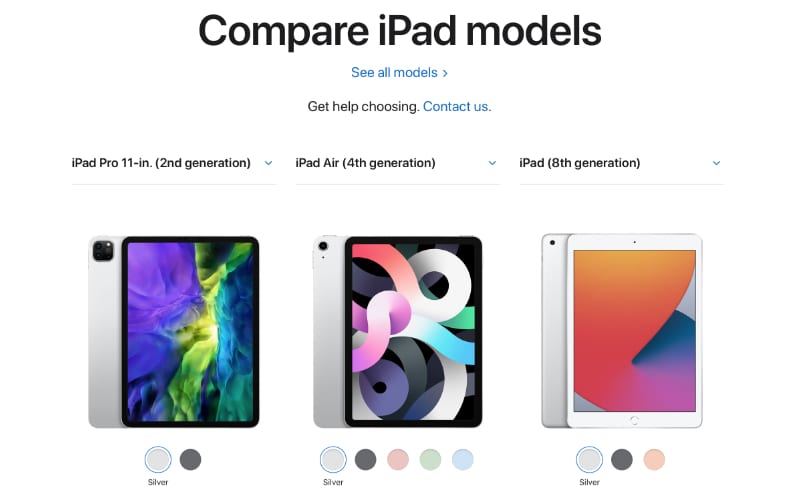 At Apple’s event on 15 September 2020, we saw the release of two new updates to the iPad lineup: iPad (8th generation) and iPad Air (4th generation). With its all-screen display, the new iPad Air looks a lot like the iPad Pro.

In case you’re unsure what the best iPad to buy in 2020 is, we’ll explain the difference between every full-size iPad model below.

An Overview of Apple’s 2020 iPad Lineup

No matter which iPad you buy, all of them are powerful tablets with high-quality screens. They can all run iPadOS 14. And each of them works with either the first- or second-generation Apple Pencil and either the Magic or Smart Keyboard.

Every iPad offers 10 hours of battery life, whether you’re surfing the web over Wi-Fi or binging Apple TV+ for 10 hours. You can also get any model in Wi-Fi or cellular variants. And they all offer Touch ID or Face ID to unlock.

But the iPad, iPad Air, and iPad Pro 11 inch are harder to distinguish from one another.

In case you can’t decide between these three options, we’ll go over all the major differences below, starting with the most important aspect of any tablet: the display.

The iPad Air now features an all-screen display, which pushes closer to the top and bottom of the iPad and removes the Home button. It looks a lot like the iPad Pro and doesn’t suffer from a notch, as recent iPhones do.

In contrast, the standard iPad still features a Home button and has wider bezels at the top and bottom of the display. It also features sharper corners, unlike the curved corners of the Liquid Retina Display on the iPad Air and iPad Pro.

Pushing the display up to the edges means the iPad Air now has a larger screen without making big changes to the enclosure.

All three iPads offer the same resolution of 266ppi. Although the actual number of pixels is slightly higher with the iPad Air and larger again with the iPad Pro, this is solely down to the larger screen size and not down to resolution.

That said, the size of the screen isn’t the only difference between these iPad displays.

The iPad Pro is the only one to feature Apple’s ProMotion technology, which dynamically adjusts the refresh rate of the display to make drawing, gameplay, and movies feel more natural than ever.

The iPad Pro is also 100 nits brighter than the iPad Air or iPad. It offers 600 nits of brightness, compared to 500 nits from the other two tablets, making it even better suited for outdoor use.

Finally, both the iPad Pro and the new iPad Air feature True Tone (which adapts the white balance to match external light sources), Antireflective Coating, and P3 Wide Color. None of which are present on the standard iPad.

Although the iPad Air and iPad Pro look almost identical, there are subtle design differences between each of them. And there are also far more obvious differences with the standard iPad as well.

First of all, the iPad Pro and iPad Air both feature a squared-off enclosure with a raised camera bump. In contrast, the iPad is rounded at the edges with a smooth camera.

That said, all three iPads are similar sizes, with less than 0.1 inch difference between the height, width, or depth across all models.

They also each weigh around 1lb, with very little difference between them.

When it comes to color, you get the most choice with the iPad Air, which comes in Silver, Space Gray, Rose Gold, Green, and Sky Blue.

Apple gave the iPad Air the exact same camera you can find in the iPad Pro. This is a 12MP wide lens camera, capable of shooting 4K video at 60fps or 1080p slow-mo video at up to 240fps.

The iPad Pro also features a 10MP ultra-wide camera, for capturing wider images. On top of that, the iPad Pro has a LiDAR sensor for next-level augmented reality.

The iPad Pro is the only iPad capable of taking photos in Portrait mode, which is due to the TrueDepth camera it uses for Face ID.

Thanks to Face ID, you can unlock the iPad Pro by looking at it, whereas the iPad Air and iPad both require a fingerprint to unlock using Touch ID.

That said, the iPad Air is Apple’s first device to integrate Touch ID into the Top button on the iPad, rather than using a Home button.

The iPad Pro is the only iPad to offer four-speaker sound. Although the iPad Air still surpasses the iPad by offering two-speaker stereo in landscape mode, rather than the less useful portrait orientation of the iPad (8th generation).

Finally, each iPad features a different processor, determining the speed and power of the tablet. There are no benchmarks of the iPad Air processor yet, so we don’t know exactly how it compares to the iPad Pro, although both outperform the standard iPad.

Whichever iPad you go for, they are all incredibly powerful and capable of intensive processing tasks, such as editing video or processing 3D graphics.

The iPad Pro and iPad Air are both compatible with the Apple Pencil (2nd generation) and Apple’s innovative Magic Keyboard.

The second-generation Apple Pencil connects to the edge of an iPad magnetically and charges wirelessly through the device. You can also tap the pencil to easily switch to the eraser.

The Magic Keyboard raises your iPad Air or iPad Pro up off the surface to present a better viewing angle, it also features a built-in trackpad and backlit keyboard.

In contrast, the standard iPad is only compatible with the original Apple Pencil, which charges through the Lightning port, and the Smart Keyboard Folio.

The iPad Pro and iPad Air both charge using a USB-C cable, which offers far wider compatibility with third-party accessories, such as cameras, storage drives, and even displays. Since the iPad uses a Lightning connector, you need an adapter to use it with most accessories.

At least the standard iPad still offers a headphone jack. To use headphones with the iPad Air or iPad Pro, you need to connect them through the USB-C port or get a pair of wireless headphones.

Of course, the biggest motivator for most people’s purchasing decisions is the price. The iPad starts at $329, followed by the iPad Air at $599, and the iPad Pro at $799.

Each model is available in Wi-Fi or Wi-Fi and cellular models, with the latter costing around $130 more (or $150 more on the iPad Pro).

The price also changes depending on how much storage you need. The standard iPad starts with only 32GB, which isn’t enough storage for most people these days. In contrast, the iPad Air starts with 64GB and the iPad Pro starts at 128GB, going up to 1TB.

Here are the Wi-Fi/Wi-Fi and cellular prices of each iPad:

If price is your main concern, the iPad (8th generation) is still a great iPad to buy. However, for an extra couple of hundred bucks, the iPad Air gets you a stunning new design, an all-screen display, a better camera, better accessories, a more powerful processor, more storage, and a wider range of colors.

For most people, the iPad Air is easily the best iPad to buy in 2020.

The main exceptions would be for technical professionals who need LiDAR, ProMotion, or (potentially) faster processing. The iPad Pro is also likely to win over some people with its ultra-wide camera and Face ID sensor, although that’s not enough to justify the price difference for most.

If you’re considering an iPad Pro, take a moment to compare the iPad Pro to the Microsoft Surface first. Just to be certain it’s the right device for you.