You are here: Home / iPad / What is the difference between the iPads Magic Keyboard and Smart Keyboard Folio?
With Apple’s introduction of the 2020 iPad Pro featuring the new LiDAR sensor, the company also shared a new keyboard. However, instead of making it available on the same day as the iPad Pro, the company postponed the launch. At the same time, Apple unveiled a new Smart Keyboard Folio to fit the updated square camera hump on the back of the iPad.

Fast forward to the middle of April, and Apple surprised everyone by opening pre-orders early. In fact, some folks received the new Magic Keyboard in April, which was before the initially estimated launch time frame. Now that we’ve had some time with both, it’s time to take a dive to determine how this compares.

What’s different between the Smart Keyboard Folio and Magic Keyboard? 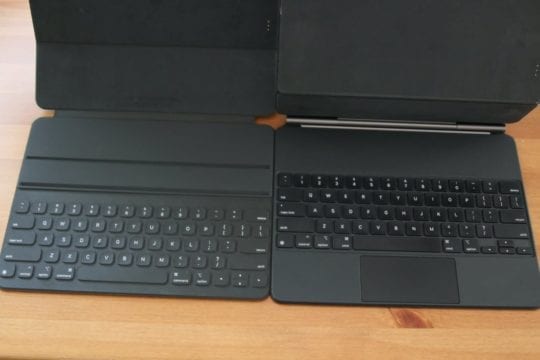 The Magic Keyboard for iPad Pro is a brand new product, which features that we haven’t seen from Apple before. Let alone, this new keyboard allows for even more modularity with your iPad, thanks to the extra USB-C port. Although this is just used for charging, it frees up your iPad’s port to use with dongles or USB-C hubs without the need for charging pass through.

When the Magic Keyboard starting making its way into the hands of those who pre-ordered, there was a general consensus about it. This new keyboard is much heavier than expected, putting it on par with the likes of the 13-inch MacBook Pro. Although, thankfully, the Magic Keyboard is not as heavy as the Brydge Pro keyboard, which is a problem for some.
The Folio is definitely much lighter than the Magic Keyboard, and for good reason. There’s no built-in charging cylinder, no trackpad, and no backlights for the keys themselves. In our experience, the Keyboard Folio makes it easier to just “grab and go” with the iPad Pro.
Truthfully, it’s still easy to grab the Magic Keyboard and go, but you may get a bit tired of the weight while carrying it. But having the added functionality such as the trackpad and adjustable viewing angles could come in handy.

The 2020 Magic Keyboard moves away from the butterfly switches that plagued the MacBook line for years. Instead, Apple has created an all-new switch that is taller than the butterfly keyboard, yet still shorter than that of the keyboard used in the pre-2016 MacBook lineup. 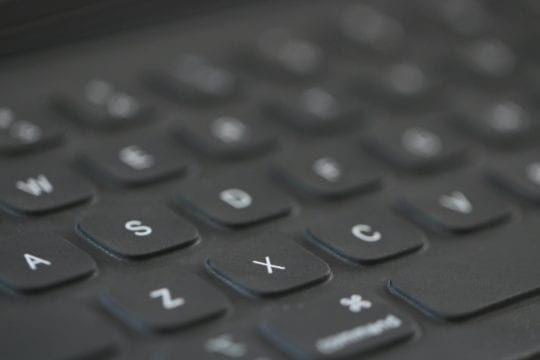 As for the Smart Keyboard Folio, this keyboard uses those same butterfly switches that caused so many issues. The difference here is that Apple wrapped it in a flexible vinyl covering, which negated any chance of something getting stuck in the keys.
Since the Magic Keyboard does not have the same vinyl covering, this feels more like an actual keyboard. On the whole, this is a full-size keyboard, with the exception of the arrow keys. With the smaller 11-inch version, there are a few keys that are smaller, but the primary letter and number keys are all the same size as a traditional keyboard. 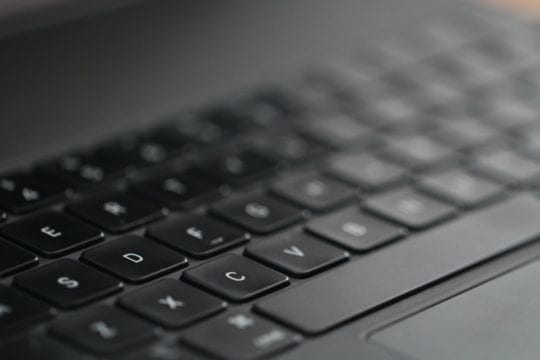 Plus, you’ll get the added benefit of having backlit keys, which can be adjusted in the Settings app. This is something not found on the Keyboard Folio, as it would be a difficult task to perform with the vinyl lining.

While there weren’t many complaints about the keyboard itself with the Keyboard Folio, there were when it comes to the viewing angles. The Folio only provides users with two angles for typing, with the iPad being slotted into cutouts on the keyboard. 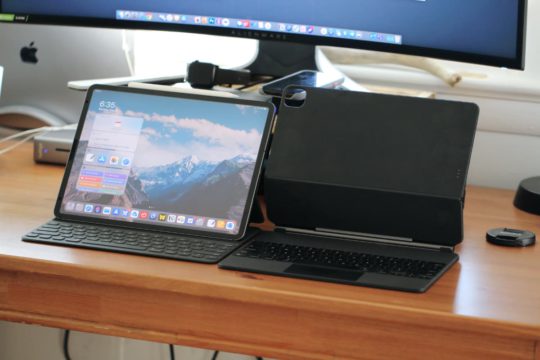 These would be fine for some desktop typing but were practically useless for long typing sessions. These limited angles would cause strain on your neck, as the iPad may not have faced you in the most ergonomic ways. But even more than that, being limited to just two viewing angles was just frustrating.
Apple solved this with the Magic Keyboard by providing “infinite angles”. This is done by having the iPad held in place with a slew of magnets and essentially hanging it over the keyboard. And with the secondary hinge on the back, you can adjust the iPad to whatever viewing angle you choose. 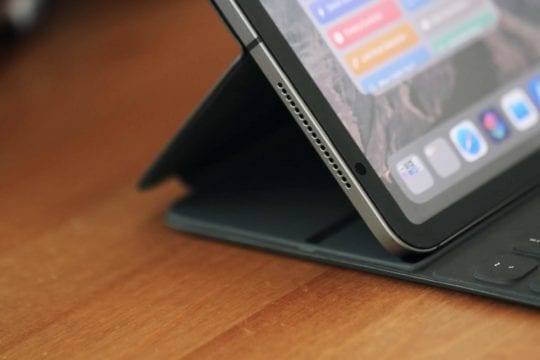 For someone who tends to need the numbers to grow, the hanging iPad does get in the way from time to time. However, it’s not so much of an issue that I would rather not use the keyboard at all. Instead, I’ve found that the bottom of the iPad acts as a barrier, providing another way for me to locate the keys while just touch-typing.

We’ve covered all of the benefits surrounding iPadOS 13.4 and the integration with mice and trackpads. But with the Magic Keyboard for iPad Pro, Apple built one right into it. This is a much better “package” than the Keyboard Folio paired with the Magic Trackpad 2. 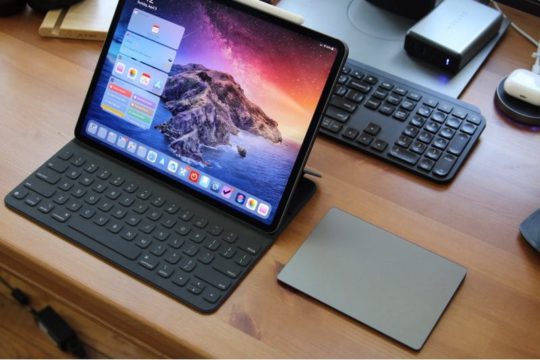 For the cost-conscious folks out there, here’s how the difference breaks out:
So for an additional $40, you can get an all-in-one package, removing the need to try and bring two products when you leave the house. And if you decide to leave the Trackpad 2 behind, you’ll have to go back to just interacting with the display without the benefit of your trackpad.
The Magic Keyboard combines all of this, adds an additional USB-C port for charging, provides better viewing angles, and looks gorgeous. The Smart Keyboard Folio has its place, but it just can’t compete for those wanting a laptop experience with the iPad. 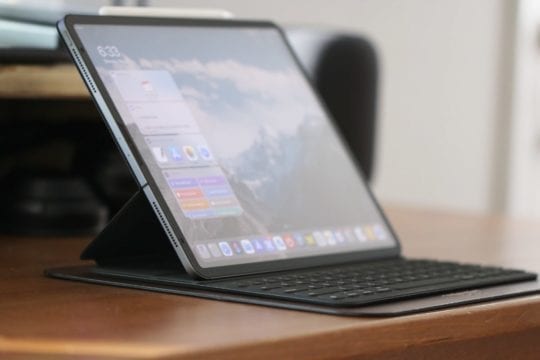 The Smart Keyboard Folio holds a special place for many due to the fact that it’s just so light. And one portion that we haven’t mentioned yet is that you can fold it all the way back and use the iPad as a tablet. That’s something that you can’t do with the Magic Keyboard.
After having the previous generation Folio for more than a year, I never ran into issues with folding it back. The only “hiccup” would be how odd it is to feel the individual keys while holding the iPad. But if you need to flip the iPad into a tablet, this is the easiest way to do so.
It also cannot be understated how valuable the weight is with this configuration. The iPad is slim and light and adding a bunch of bulk turns it more into a laptop, and less of a tablet. With the Keyboard Folio, you maintain that tablet feels, with the benefit of having a keyboard attached. And you don’t have to worry about using Bluetooth thanks to the Smart Connector. 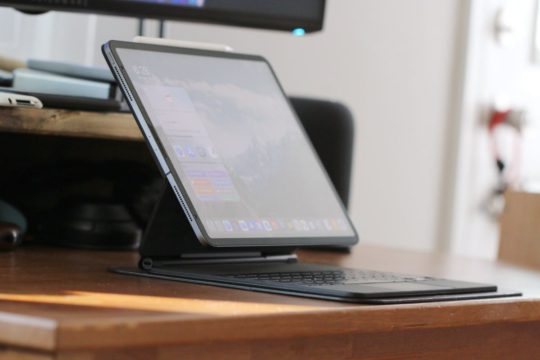 In one word? Everything. As someone who spends a lot of time typing and performing research, the iPad Pro with Magic Keyboard is the perfect combination. The only frustration I have found is when I want to just use the iPad as a tablet, but it detaches from the Magic Keyboard with just one hand. So I can just pick it up and do some reading or whatever else.
The keys are a dream to type on, providing just enough tactile feedback, without bottoming out with every press. The added backlighting makes it easy to type in the dark, and being able to adjust the lighting is helpful as well.
With the trackpad, not only do you get a tactile trackpad integrated into the keyboard, but you now have a palm rest. This makes for a MUCH more enjoyable experience when trying to do some work from the couch, or your lap.
The weight of this is definitely noticeable, especially when comparing the Keyboard to the Folio. However, it’s not enough to deter us from reaching for it and grabbing it when it’s time to get some work done.

Which one is “best”? 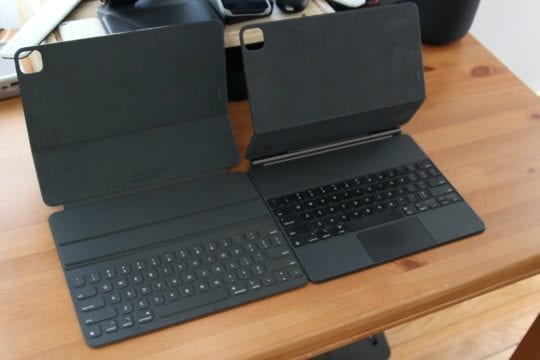 No matter how much folks want an “end-all, be-all” answer to this question, it’s just not that simple. The Keyboard Folio and Magic Keyboard provide different solutions to the same question. The Magic Keyboard is not simply a replacement for the Folio, as evidenced by Apple not only releasing an updated version for the 2020 iPad Pro but the fact that it’s still available on Apple’s site.
If you’re having a hard time deciding which is the right keyboard for you, here’s a few ways to look at it. For those who spend a lot of time typing, want an integrated trackpad, and need to free up the USB-C port, get the Magic Keyboard. For everyone else, the Smart Keyboard Folio will work absolutely fine. It gets the job done, folds all the way back, and is much lighter than its new brethren.
In the meantime, I’ll be sticking with my Magic Keyboard for the foreseeable future.