Whether you’re the proud new owner of an Apple Watch SE or a longtime owner of previous Apple Watch versions, you might not be completely clear on what the Activity rings of your Apple Watch mean. And since so many people by the Apple Watch specifically to get into the habit of closing these rings, this is a bit of a problem.

In this post, we’re going to clarify the difference between the Move (red) and Exercise (green) rings on Apple Watch. We’ll also cover a few misconceptions about each.

What does the Apple Watch Move ring track?

The Apple Watch’s Move ring is the red one. It’s also the biggest and generally takes the longest to close. That’s because this ring tracks the active calories you burn throughout the day. The keyword here is “active” – all of us naturally burn calories while sitting, sleeping, and eating, but none of these are very active activities.

Though Apple won’t give away the secret sauce on what Apple Watch counts as “active calories”, we can make a few assumptions. First, you have to be moving, and that includes the arm wearing your Apple Watch. If you don’t swing your arms slightly when you walk, take the stairs, or bring in groceries, your Apple Watch might not be able to tell that you’re burning active calories.

In addition to movement, the Apple Watch is likely taking your heart rate into account. After all, the faster your heart is beating, the more calories you are burning. Your heart rate not only helps Apple Watch calculate your active calories, but it tells it when you’re being active as well.

What does the Apple Watch Exercise ring track?

What I just described may sound like exercise to some people, but it’s not necessarily exercise to the Apple Watch. For your Watch’s Exercise ring, your heart rate is the main factor being considered – not the calories.

For thirty minutes each day (or however long you choose), you need to be doing an activity that raises your heart rate significantly above its average BPM. Apple defines this as anything more than a brisk walk.

Though this is more physically taxing than the Move ring, it’s generally the easiest ring to close. That’s because it takes the least amount of time, is pretty black and white (just workout for thirty minutes and you’re good to go), and it contributes to the rest of your rings.

All exercise is movement, but not all movement is exercise

Part of what confuses users when it comes to these two rings is how they relate to one another. Shouldn’t all of your Exercise calories count towards your Move goal, and why do some exercises only close your Move ring, but not your Exercise ring? 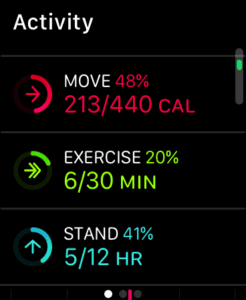 The answer primarily comes down to the subtle differences between these two rings. Namely, your heart rate and your movement.

Anyone who’s completed a workout on their Apple Watch has probably seen Active Calories next to Total Calories. Your Active Calories will always be the lower of the two, even though all of those calories were burned during an exercise. This comes down to movement versus heart rate.

When you take a thirty-second rest in the middle of a workout to catch your breath, your heart is still pounding, which is contributing to your Exercise ring and Total Calories for that workout. However, because you aren’t moving, those calories probably aren’t being counted as Active Calories. Apple is somewhat vague on this, so it’s difficult to be completely certain, but this seems to be the general idea.

As another example, you probably burn a decent chunk of calories while sitting in a plank pose. However, you also aren’t moving, so those calories might not be counted as Active Calories. So someone who goes on a run might have a higher percentage of Active Calories than someone doing a plank for thirty minutes, even though both will have closed their Exercise ring.

The Exercise ring and the Workout app

The Stand and Move rings on your Apple Watch will pretty much take care of themselves so long as you remember to work on them throughout the day. However, if you never go out of your way to exercise, you’re unlikely to see your Exercise ring move towards the finish line. Even if you go on a brisk walk as Apple prescribes, this might not be enough to get your Exercise ring to move. 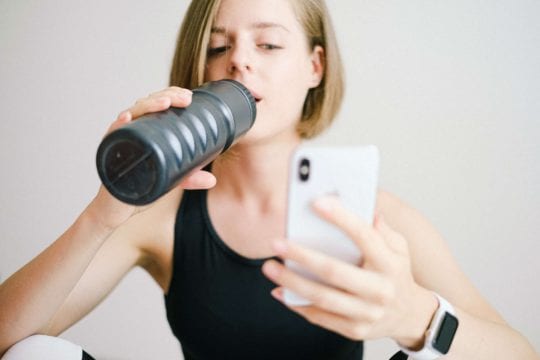 That’s (partially) what the Workout app is for. It is built to sense and track specific workouts so that you can close your Exercise ring with greater accuracy. And depending on what kind of workout you’re doing, you might not make any progress without using the Workout app. If you’re on a bicycle, for example, and go on a two-hour ride, the Apple Watch might simply interpret that as a car ride and completely ignore it.

So to make sure you get credit for your exercise, always use the Workout app and choose the workout that’s closest to the activity you’re working on. Generally, doing any of these workouts for thirty minutes will close your Exercise ring no matter what.

What’s the difference between the Apple Watch Exercise ring and Move ring?

The Exercise ring on Apple Watch tracks exercises, which Apple considers to be anything more intense than a brisk walk. The Move ring, on the other hand, tracks active calories burned, which are any calories that you burn while moving.

Why isn’t my Move ring closing?

If you’re having a hard time closing your Move ring, then you may need to lower the goal. Your Apple Watch will suggest a new Move goal to you at the end of each week, so if you aren’t meeting your goal, then you probably need to lower it.

Why isn’t my Exercise ring closing?