You are here: Home / Mac / Gaming On Mac: How To Make It Work

One of Apple’s oldest and most glaring shortcomings is gaming on Mac. It’s an open secret that trying to play the latest game on your iMac is going to go terribly.

I remember hearing these rumors for myself and not taking them seriously before I bought my first Mac. And then, after buying one, I tried to play one of the least intensive games on the market: Terraria. And I immediately found that I wasn’t able to even walk around the map without experiencing lag.

But why is gaming on Mac so bad? And does it have to be this way? And is Apple working to change this?

Let’s kick things off by addressing that first question.

Why is gaming on Mac so bad?

I think the reason most people find this phenomenon so mind-boggling is that Macs are expensive, powerful machines. They’re often preferred by professionals, especially by professionals with intense needs. Video editors, graphic designers, photographers, all tend to gravitate towards Mac.

So if Macs are so adept at handling these difficult tasks, why do they struggle with the simplest games?

Specs vs. Optimization. Anyone who knows anything about hardware knows that (pre-M1) Macs tend to ship with older, slower hardware. That includes processors, RAM, and graphics.

The reason Macs still feel smooth and snappy, especially when compared to Windows machines, is because of optimization. Apple builds the hardware and operating system for every computer they sell. And they also make most of the apps you’ll use on a Mac.

Because of this, each app on Mac runs in harmony with the system. Your apps aren’t treated like a separate process that your Mac is running, but an extension of the OS. And Mac developers tend to follow this trend, which makes third-party apps feel smooth, too.

However, gaming apps do not follow this path. Gaming apps are hardly ever optimized to the system that they’re running on to a noticeable degree. Instead, they rely on the machine to carry most of the power needed.

Additionally, games are very graphics intensive. And Macs, until the M1, didn’t have a dedicated graphics card.

So, to summarize, you have a low-specced machine running a graphics-intensive app that hasn’t been optimized for it without a graphics card. 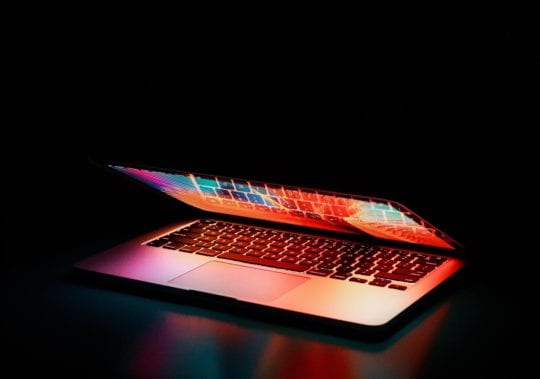 Another problem with gaming on Mac is that the vast majority of Macs aren’t upgradeable. What you buy is what you’ll have until you sell that machine.

But this doesn’t work for gaming! Gamers need to be able to upgrade their machines. Consoles are regularly replaced by substantially more powerful machines. PC gamers are constantly adding newer, better components to their PCs. And game developers are always trying to push the limits with their games.

That means that even if your Mac can crush games within the first six months of its lifespan, it’s going to start to lag after that. And it will never get better! The only way to get more performance from your Mac at that point is to buy an entirely new machine. And I don’t need to tell you that most of us can’t replace our Macs every year.

Macs have a limited library of games

Lastly, Macs don’t have as many games to offer as Windows does. That’s because Windows is considered the standard operating system for games (the same way that iOS is the standard for smartphones). So developers always make a Windows version of their game, but only sometimes make a Mac version.

This was changing for a while. Developers were beginning to make Mac editions of their games more and more often. But then Apple switched to the M1 chip, which completely changed what is and isn’t compatible with Mac. Which means that the already limited Mac library of games is about to get much, much smaller.

No one who cares about gaming enjoys seeing games, indie and triple-A, pass them by because they can’t install them on their computer. So gamers just end up avoiding Macs.

Luckily, there is some hope. I will say, first, that if you care about PC gaming and don’t need a Mac, then just get a Windows machine. Build out the PC, add lots of cool accessories, and make the most of the transition.

But if, like me, you’re fully-locked into the Apple ecosystem and still want to game, here’s how you can make it work.

The first step in playing games on your Mac is to buy the right Mac with the right specs. If you already have a Mac that you don’t plan on replacing anytime soon, feel free to skip to the next section. 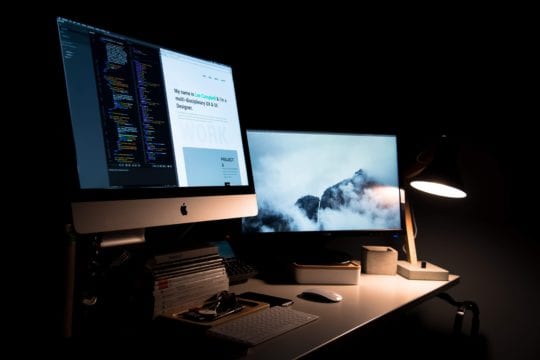 When buying the “right” Mac for gaming, you want to:

That leaves you with the iMac, the MacBook Pros, and anything Apple offers that’s more powerful than that. On their own, these Macs will give you enough power to play simple, low-power games. With the other tips below, though, it should be a strong enough foundation to carry you through most average PC games.

2. Set Up Boot Camp for your Mac

The next thing you’ll want to do is set up Boot Camp on Mac. Boot Camp is a feature on non-M1 Macs that allows you to install Windows on your Mac. You’ll still have macOS installed, too. When you start your Mac, you choose whether you want to run Windows or macOS.

The reason you’ll want to use Boot Camp is that most PC games are designed for Windows first. This means that they’re hardly ever optimized for Mac, and often not available on Mac at all.

There are third-party alternatives to using Boot Camp (see Tip #3). However, these aren’t going to run as smoothly as Boot Camp will since they either translate Windows games to your Mac or emulate a Windows environment on your Mac. And neither of these options is going to be as streamlined as running directly on Windows on your Mac.

3. Use WINE if you don’t want to set up Boot Camp

A popular alternative to Boot Camp is WINE. WINE (Wine Is Not an Emulator) is what’s known as a compatibility layer. It’s an app that allows Windows apps to run on Linux machines and non-M1 Macs. This allows you to install and play Windows-exclusive games on your Mac.

Before you try this method, however, know that it will require some tech-savviness. I don’t think the average computer user will know enough to install, use, and bandage this solution. Because, sadly, it is just a bandage and one that won’t work for every game or app.

Additionally, this doesn’t give you the optimization boost that Boot Camp does. So while it might be more affordable or simpler to use (you won’t have to reboot into Windows when you want to game) it’s not an ideal solution. But if Boot Camp doesn’t sound like it’s for you, WINE is a popular alternative.

4. Use an eGPU to boost performance

I recently wrote a full tutorial on using an eGPU with your Mac, which you can read here. For those who don’t want to read the full thing, here are the basics.

An eGPU is an external graphics processor house. It’s a device that you plug into your Mac like a thumb drive or USB hub. You can then install graphics cards into that eGPU housing and set apps to run on that GPU rather than your Mac’s built-in GPU.

If you remember, I mentioned in this article that Macs are known for having poor graphics performance. This is because they lack a dedicated GPU. Only the M1 Macs have a dedicated GPU, but for reasons explored below, the M1 still isn’t an ideal solution.

By connecting an eGPU, you can give your Mac a massive boost in graphics performance. For Macs that can’t run even the most basic video games, this can carry you back to a normal level of performance.

You still won’t get the power of a self-built Windows machine, and not every game will run on an eGPU, but it’s a solid workaround for passionate gamers.

5. Use a cloud gaming service

Cloud gaming services are pretty new to the gaming scene. If you’re like me, you’ve probably only just started to even know what they are. But they’re exploding in popularity, and for good reason.

For those who don’t know, a cloud gaming service is a streaming service for video games. The keyword here is “streaming”. You don’t have to download or install the games you’re playing on your device. Instead, a remote server is running the game for you. This means that the only thing dictating the game’s performance is your internet connection.

In other words, playing with a cloud gaming service means that you don’t have to have a powerful computer at all. There are some downsides, of course, such as a limited selection of games. But for most casual to enthusiastic gamers, the selection should be plenty.

There are several cloud gaming services available for Mac, including Nvidia GeForce Now and Vortex. Just find the one that suits you and give it a shot!

6. Connect an Xbox or PS4 controller

Last up on our list of tips for gaming on Mac, we have a pretty simple one. And that tip is to connect an Xbox or PS4 controller to your Mac. Apple has added support for these controllers, giving you access to a high-quality gaming controller without the need for a third-party key binder. 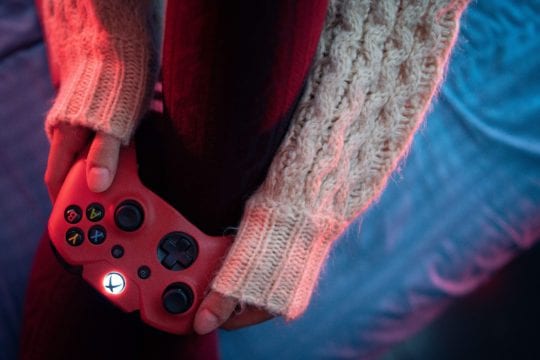 Using a controller is not only more comfortable for the average gamer, but it also allows you to game without relying on the Mac keyboard, which is known to be subpar in terms of comfort.

And that’s it! If you implement some or all of these tips, you should be on your way to a pretty good Mac gaming experience. Again, things won’t be as good on Mac as they are on Windows right now, but you can make it work.

Are M1 Macs better for gaming than Intel Macs?

Yes and no, but mostly, no.

Yes, M1 Macs do represent an incredible boost in performance for Macs. They’re dramatically faster, and they have a dedicated 8-core GPU, which means that games that can run on the M1 chip will run very well.

No, M1 Macs are not ideal for gaming, because they are an immense source of compatibility issues. Apple has done a great job at bridging the gap between Intel and ARM with apps like Rosetta 2.

However, it’s not perfect, nor is it permanent. In about two years, support for this transition is going to come to an end, and whatever hasn’t been rewritten for the M1 is going to be left behind.

In other words, the M1 just made compatibility for games on Mac much more complicated. Your gaming library is going to shrink substantially until game developers embrace the M1. Hopefully, that happens sooner rather than later, especially since the M1 seems like the first step towards gaming on Mac becoming better. But, for now, I’d avoid the M1 if you consider yourself a gamer.

Will gaming on Mac ever be good?

I sure hope so! At the time of writing, it doesn’t look like gaming on Mac is going to change drastically in the next year or two.

However, it does seem like Apple is investing more in the gaming market. It’s launched Apple Arcade, demoed games on the M1 Mac, and built an 8-core GPU for the M1 chip. All of these things point towards Apple wanting to make a more gaming-friendly machine.

Now, we just have to wait and see if Apple will continue to work for this market and if developers will embrace Macs as their gaming viability improves.

In the meantime, I hope these tips help!