You are here: Home / Apple Watch / How to Disable Auto Music Controls on Apple Watch

Even though Apple’s Now Playing app gives us a fast way to control music and most audio app playback on our Apple Watches, it also can play music when you really don’t want to! That’s because Now Playing pops up automatically by default, sometimes getting in the way of all the other things we want to do.

But some of us want the control and want to be the decision maker.

If you struggle with Now Playing on your Apple Watch and want to regain some control over your Apple Watch’s audio playback, read on! This article outlines just how to disable auto music controls on Apple Watch.

What is the Now Playing app on your Apple Watch?

With this feature on, when you play music or other audio on your iPhone, the music controls automatically show up on your Apple Watch.

It’s similar to Apple Maps–when following a route on the native Maps app, the information automatically transmits to your Apple Watch.

With your music controls now staying on the screen of your paired Apple Watch, changing tracks or volume on your EarPods or AirPods is easy, all without having to use Siri or navigate to the music app on your watch.

And, when you’re done, your watch returns to your normal watch face when not listening to audio

Not everyone enjoys or finds comfort in the idea of Apple auto opening the music controls on their Apple Watches. When you raise your wrist, you might just want to see what time it is or how far you are in your activity circles–and Now Playing is rather an obstacle than a feature!

Indeed, this feature just might annoy many Apple Watch fans.

Especially those of us who want to see other information on our watches, and NOT the built in music controls.

Pressing the crown returns to your normal watch face.

And your normal watch face remains even for your following glances throughout this session.

This method disables the auto music controls on your Apple Watch.

How to get Now Playing feature back on your Apple Watch?

Decided you actually like the Now Playing app and want it back. That’s easy!

Go back to Settings > General >Wake Screen on your watch or the Watch app on your paired iPhone and tap to turn back on Auto-Launch Audio Apps.

Having trouble with changing your Apple Watch settings?

What’s Different About the iPhone Music Controller in watchOS4 and above?

It seems that with watchOS4+ and iOS11+, you can no longer scroll up and tap your iPhone to choose it as your music source.

On the previous versions of watchOS, your Apple Watch Music app could control the music playing on your iPhone, but with watchOS4, this option is gone. 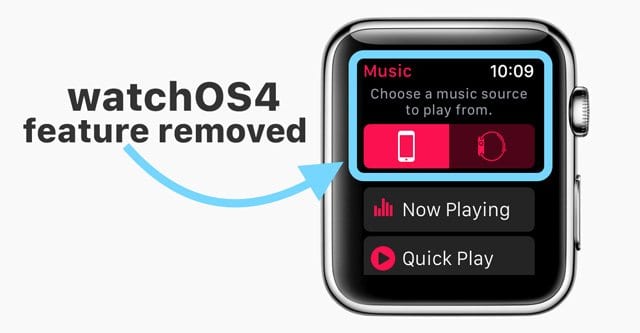 So if you’re listening to music on your iPhone (AND NOT on your Apple Watch), you no longer can start playing music or change tracks without touching your iPhone.

For many, using their Apple Watch as an iPhone music controller was their favorite feature of the Apple Watch.

Instead, there is a Now Playing complication that lets you skip, play/pause, adjust volume. In watchOS 4, Apple also removed the Music complication. 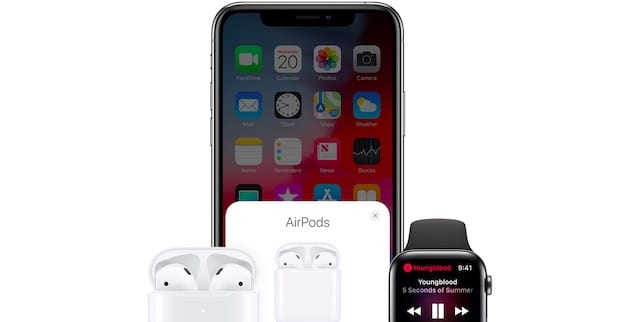 Airpods have made it easier for listening to music via your Apple Watch.

It allows you the freedom to put on your airpods and listen to your music via your Apple Watch without the need of carrying your iPhone.

This partnering is extremely useful if you are going out for a run or burning a few calories via gym equipment at your local gym.

With the latest watchOS, there are many different options to enjoy your music on your Apple Watch today.

Automatic playlist syncing and auto music control are some of the most sought after features for iFolks listening to music on their Apple Watches–especially during intensive or long workouts, runs, bike rides, or walks.

And if your music app has a companion Watch app, the Watch launches that companion app instead of the default Now Playing app.

But for those that desire control, we’ve outlined a quick tip on how anyone can disable auto music controls on Apple Watch.

We hope that you found this quick tip useful!

If you have any problems or questions about preventing your Apple Watch from automatically launching your muisc or other audio via Now Playing, let us know in the comments.