You are here: Home / iPhone / How-to Enable or Disable Do Not Disturb While Driving on iPhone

One very useful iOS feature (for iOS 11 and above) is Do Not Disturb While Driving (DNDWD.) With it enabled, Apple hopes to make drivers with iPhones safer and reduce iPhone distracted drivers. But of course, not everyone wants (or needs) this feature! Though a great idea, getting a message to turn it on every time you step into a vehicle, even as a passenger, can be quite annoying. For this reason, a lot of our readers have asked us how to disable Do Not Disturb While Driving or change its settings to manual. And there’s plenty of confusion on how to turn on do not disturb while driving too!

The Do Not Disturb While Driving (DNDWD) feature automatically hides all notifications and mutes incoming calls, certain alerts, and texts while you’re driving (or in any moving vehicle.) This way drivers won’t be distracted by texts, emails, and phone calls when they hit the road.

So, here’s how DNDWD works and what we think. Even learn tips on how to turn off Do Not Disturb While Driving if you just plain don’t like this iOS 11 feature.

Do Not Disturb While Driving (DNDWD)

While Apple turns off Do Not Disturb While Driving by default, your phone does automatically notify you whenever it thinks you’re driving and asks you to turn it on. You can also turn it on yourself (manually) in the settings app under Do Not Disturb. When you turn DNDWD on, your iPhone is silent and its screen stays dark. You don’t get texts or other notifications, but you DO receive ALL Apple Maps app navigation including turn-by-turn instructions, ALL emergency alerts, and any previously established timers or alarms. 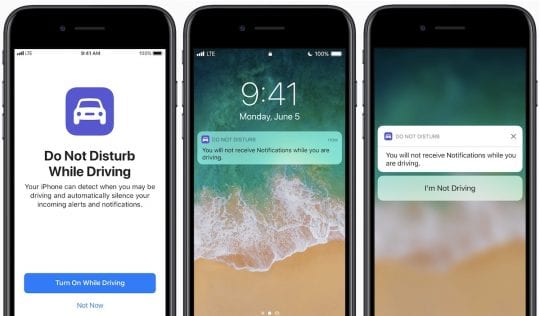 And your phone calls follow the same rules as regular Do Not Disturb. That means you receive calls from your designated Favorites. And if the same person calls twice in a row, you get that call too.

DNDWD works by detecting the motion of a car, in particular, acceleration. 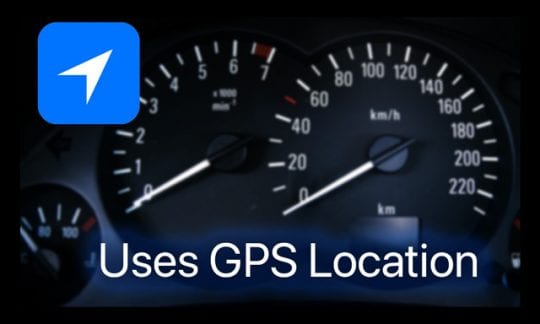 Because it cannot distinguish between modes of transportation or driver versus passenger, Do Not Disturb While Driving appears on everyone’s iPhone, even if you don’t drive.

Once turned on, you do not receive any notifications when you are driving

Instead, everything is silenced, with the exception of your recent or favorite contacts if you choose them in settings. With DNDWD turned on, if someone texts you while you are driving, they receive an auto-reply that “I’m driving with Do Not Disturb turned on. I’ll see your message when I get where I’m going.” 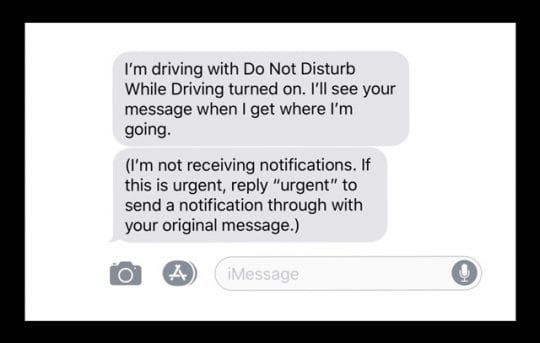 We hope it’s never the case, but things happen and there are times when texts and notifications must come through, whether you’re driving or not. If it’s an emergency, Apple provides a way for the message sender to get through the Do Not Disturb feature by replying with ‘urgent’ for an emergency. 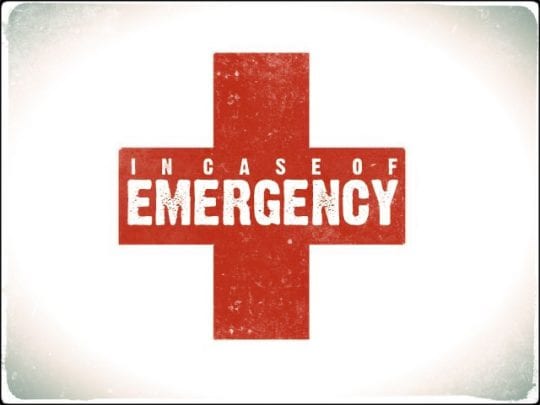 When the sender types in urgent, the notification goes through despite Do Not Disturb While Driving being ON. At that point, ask Siri to read it to you or pull over and read that important message.

How To Enable Do Not Disturb While Driving 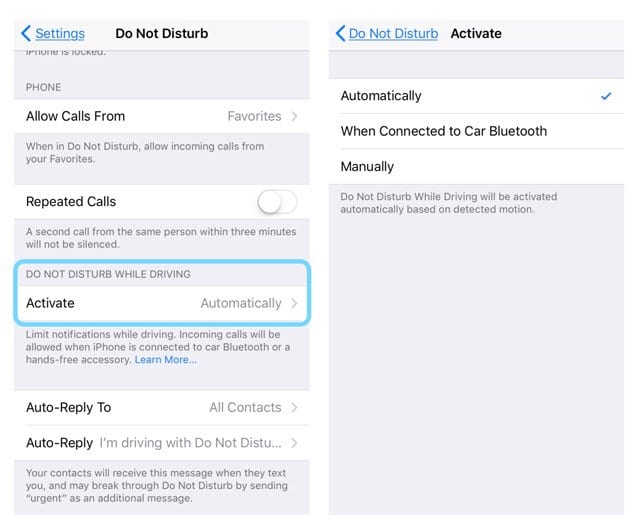 If you don’t want to set Do Not Disturb While Driving to turn on automatically, add it to Control Center for easy access. 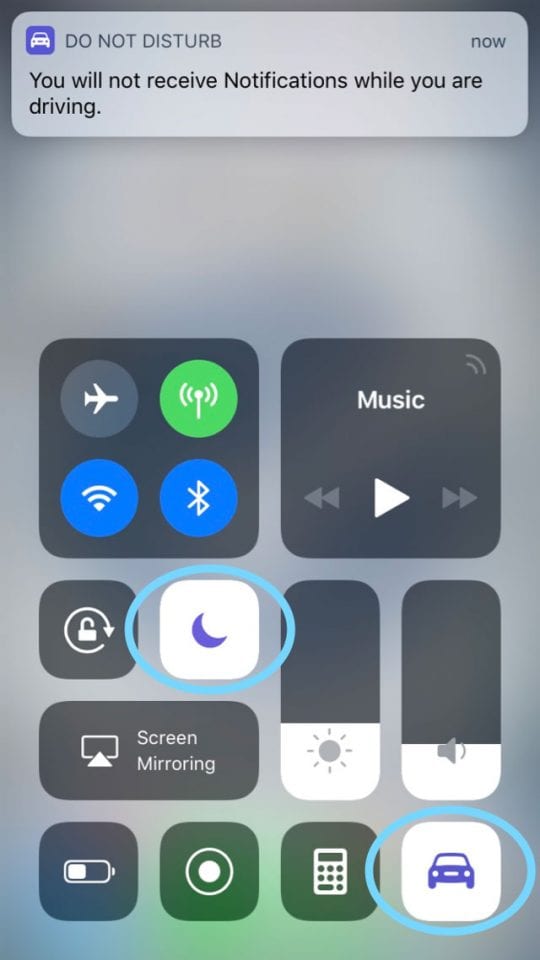 Don’t Want Your Teenage Driver to turn DNDWD OFF?

If you’re the parent or guardian of a young driver, you can set Do Not Disturb While Driving ON and lock it using Restrictions

How-To Disable Do Not Disturb While Driving?

If you want to disable this feature on your iPhones (or your child’s iPhone), it’s pretty simple.  Go back to Settings > Do Not Disturb > Do Not Disturb While Driving > Activate >Manually. Currently, there is no way to completely remove or turn off this feature. However, setting this to manual means the only way to activate it is to intentionally turn it on, usually via Control Center. So you’ll need to add it to your Control Center by going to Settings > Control Center > Customize Controls > and add DNDWD to your INCLUDE options.

Get Rid of that Do Not Disturb While Driving Notification

Do Not Disturb While Driving Not Working?

How To Tell if Do Not Disturb While Driving is ON?

Whenever Do Not Disturb While Driving is on, a crescent moon appears at the top of the screen appears letting you know this feature is currently enabled.

You are moving in a vehicle, and your iPhone doesn’t know who’s driving. When you set DNDWD to automatic, it turns on whenever your iPhone senses vehicle acceleration. This includes times when you are a passenger in your family’s car and even the city or long-distance bus or train! So yeah, DNDWD can be super inconvenient. The best option is to set it to manually in DND Settings, add it to your Control Center customization, and then swipe up Control Center to turn it off. Another option is tapping I’m Not Driving option in the popup that appears when DNDWD is automatically enabled. 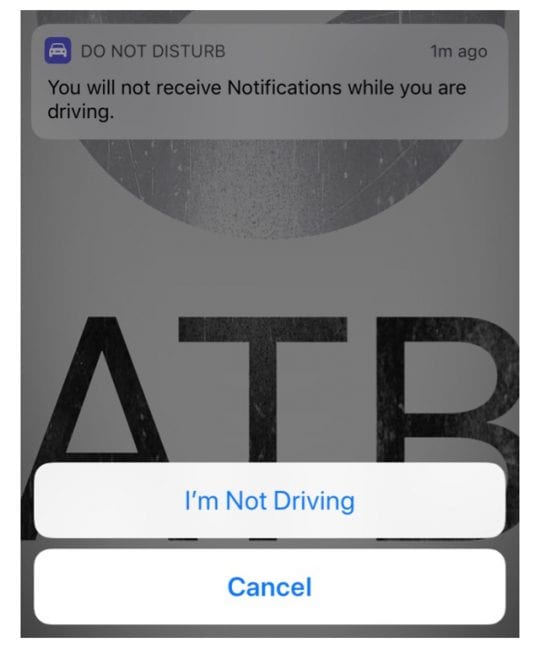 For folks with CarPlay, Do Not Disturb While Driving is not activated when you connect your iPhone in your car. So this feature should not interfere with your Apple CarPlay experience.

Having Problems with CarPlay?

If you’re experiencing problems with CarPlay and DNDWD, try setting it to Manually and see if that solves any issues.

What About Bluetooth Car Connections?

If your iPhone connects to your car using a Bluetooth system, all your phone calls come through as they normally do. Do Not Disturb While Driving does not limit using your car’s buttons, microphones, and speakers to take any calls. When Connected to Car Bluetooth: Do Not Disturb while driving starts when your phone connects to your car’s hands-free system.

You should, however, set-up DNDWD to When Connected to Car Bluetooth. That way Do Not Disturb While Driving activates when your phone connects to your car’s hands-free system. Make sure you enable Fitness Tracking on our iPhone. Go to Settings > Privacy > Motion & Fitness > Fitness Tracking > ON.

Having Problems with Your Car’s Bluetooth and DNDWD?

If you’re experiencing problems with your automobile’s BT system and DNDWD, try setting it to Automatically and see if that solves any issues. Or try Manually.

Can You Change the Auto-Replay Message?

You sure can! Update it to whatever suits your fancy. Go to Settings > Do Not Disturb > Auto-Reply (you only see this option if Auto-Replay To is selected with contacts, favorites, or recent.) Tap on Auto-Reply and then tap again inside the message. Change it to whatever you want your contacts to see when you have DNDWD on. 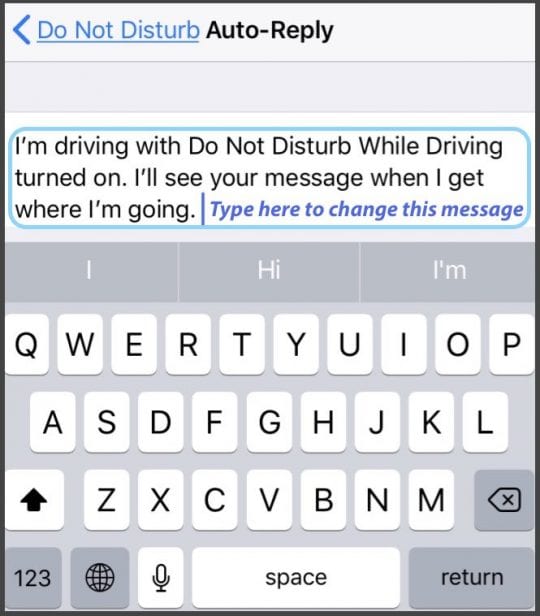 You cannot change the wording of the URGENT message for emergencies.

What About Google Maps or Waze?

Good news! iOS allows third-party navigation apps to work with DNDWD as long as your open these apps BEFORE DNDWD kicks in (i.e. start driving.) So if you enable Do Not Disturb While Driving, you still get your Turn-By-Turn Directions from Google Maps, Waze, etc. However, users report that they do not get any notifications of trips. So for Lyft, UBER, taxi drivers, and other car-share services, if you turn on Do Not Disturb while driving, you will NOT get any notifications of your trips. Not good for business!

Do Not Disturb While Driving Not Working?

Experiences Using Do Not Disturb While Driving

While conceptually Do Not Disturb While Driving is a great idea, in execution I’ve found it to be less than ideal. Apple insists you enable this feature if you drive with your phone, even if you turn it off. Because it’s detecting car-like motion, even passengers get the reminder to turn on DNDWD. So if your car is filled with other folks with iPhones (like a carpool or family trip), everyone gets the message to turn DNDWD on–at least once after installing iOS 11. And many of our public transportation users report that their iPhones keep popping up with DNDWD reminders while riding the bus, train, or other modes of public transportation where you are certainly NOT a driver.

Another problem I’m getting with DNDWD is because it mutes all Notifications, I am not able to use my iPhone as a music player when it’s connected to Bluetooth!

During our testing, we found it to be relatively buggy. During one experience, in particular, I was driving with the feature enabled, while using Maps to direct me somewhere I had not been before. While on the highway, my Maps app crashed, meaning I had no idea where to get off, and DNDWD was requiring me to go through a bunch of extra steps to ‘confirm’ I was no longer driving, despite the fact I was. When I tried to use Siri to reenable directions, it wouldn’t let me do that either.

Even when I purposefully set DNDWD to Manually, I still got that annoying pop up to remind me that Do Not Disturb While Driving can be enabled.

Apple should understand that if a driver enables the feature, then they aren’t using that phone again while driving unless they have to. Consequently, it’s rather poorly designed for emergency situations when the driver (or someone in the car) needs to use that iPhone to seek assistance or report an incident. So ultimately, we see DNDWD as a works-in-progress and look forward to it maturing as a feature over the coming years.

We all are aware that distracted driving is a real problem, no matter what country you live in. In the era of mobile devices, way too many accidents are caused by texting and other mobile device distractions. And we applaud Apple for doing something about it with iOS 11’s “Do Not Disturb While Driving” feature. It’s not perfect–maybe even far from perfect. But the goal is still golden and necessary. Despite the challenges, the annoyance of DNDWD pop-ups, and some bugs, I still have this feature on. And we recommend you try it out and if unwilling to set it to do the work for you automatically, consider using it manually. It’s something that very well could save lives, limbs, and even minor bumps in the road.