You are here: Home / Mac / How to use split-screen on a Mac to view side-by-side apps 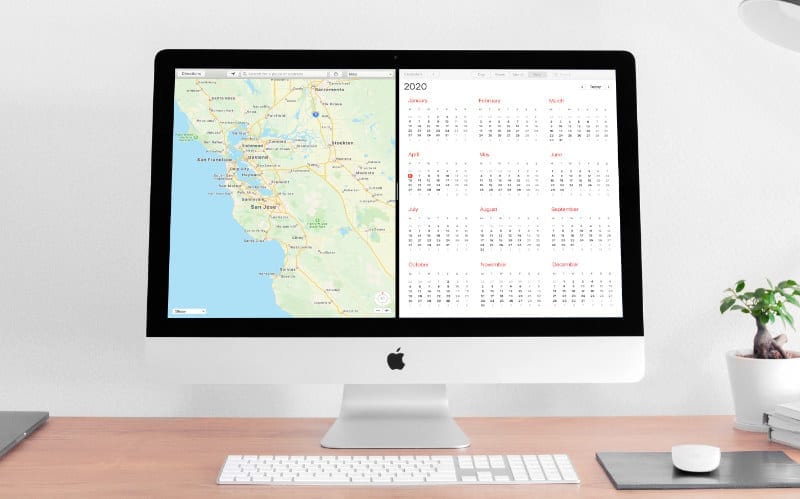 One of the best ways to boost productivity on your Mac is to open two apps in split-screen view, so you can work on them side by side. Apple calls this split view, and it’s super easy to use.

Split view on your Mac fills the entire screen by hiding the Dock and the menu bar for distraction-free multitasking. You can use two apps at once—one for each eye!—and get your work done in half the time.

How do I see apps in split-screen on my Mac?

Apple gives you a couple of ways to enter split-screen view on your Mac, but you always need to start by opening the individual apps you want to use first.

It doesn’t matter if these are two different apps or two windows from the same app.

After opening the two app windows you want to use at the same time, follow the methods below to use them in split-screen on your Mac.

How to see your other apps in split-screen?

Two apps in split-screen view appear in an entirely separate “Space” on your Mac. This is the same thing that happens when you enter full-screen mode. Split-screen even hides the menu bar and the Dock like full-screen mode does to reduce distractions.

Change apps from the split-screen view on your Mac the same way as you would with a full-screen app. Use any of the following methods to do so:

Split-screen on your Mac also lets you change the window width for each app to see the contents better. To do this, click and drag the divider in the middle of the screen. Different apps allow different window widths.

To flip your split-screen apps to the opposite sides, click and drag the toolbar at the top of an app window from left to right, or vice versa. As you drop it onto the opposite side of the screen your apps swap places with each other.

How to turn off split-screen?

Apple gives you a few ways to stop using split-screen on your Mac, depending on whether you want to close an app, go into full-screen, or shrink both windows.

To close a particular app, select it from your split-screen view then close the app as you normally would. You can click the red button in the top-left corner of the window, go to [App Name] > Quit [App] from the menu bar, or press Cmd + Q. When you do so, the remaining app changes to full-screen mode.

What to do if split-screen isn’t working

Like all things, split-screen on a Mac isn’t perfect. It isn’t available for every app, you can’t always adjust the widths the way you want to, and there’s no way to interchange apps within the same split-screen view.

That said, split-screen is still an incredibly useful feature to use on your Mac. And if it isn’t working you should use the following steps to fix it.

Apple introduced split-screen on the Mac with OS X El Capitan. If your Mac is running older software than that, you need to update it. You should update your Mac either way to fix software bugs that emerge over time.

Open the Apple menu and go to System Preferences > Software Update to download and install updates on your Mac.

Go to System Preferences > Mission Control and check the box next to the Displays have separate Spaces option.

Although seemingly unrelated, this option often causes problems with split-screen on Mac. After checking the box, you need to log out of your Mac to enable the feature. Open the Apple menu to do so.

Not every app works in split-screen view on a Mac. And some that do are only available at certain widths. If you can’t get split-screen to work, try using it with different apps instead.

Here are some native macOS apps that should work in split-screen:

If these apps work, maybe the other apps you were trying to use aren’t compatible with split-screen. Ask the app developers to find out.

Use window snapping on your Mac instead of split-screen

Split-screen isn’t the only multitasking option available on your Mac. You can also snap windows to different sides of the screen to view them side by side. Although not as sleek as split-screen, window snapping lets you reshape windows how you like without losing the Dock or menu bar.

To snap a window to the left or right side of your Mac screen, press Option while you click and hold the green button at the top-left of an app window. The drop-down window that appears should now give you the options to Move Window to different sides of the screen.

When you choose to move your window this way, macOS resizes it to fill the entire left or right side of the screen.

Magnet is one of several useful utility apps to install on your Mac. Other utilities let you improve the copy-paste abilities, search functions, touch gestures, and more.