You are here: Home / iPad / These new multitasking and UX features in iPadOS will bump your productivity 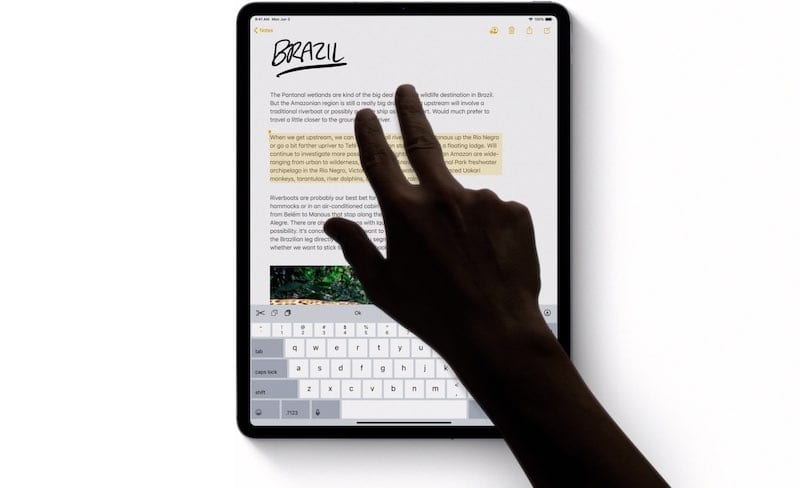 Over the years Apple’s iPads have evolved into devices that can help you get some serious work done. In fact, some iPad models can basically stand in for a full-fledged personal computer. That’s even truer in iPadOS.

In iPadOS, Apple has introduced a slew of new gestures and human interface exclusive to its tablet lineup.

Many of them are aimed at mimicking or replacing the traditional PC experience — such as easier text-based gestures and multitasking options.

There are quite a few multitasking and UX options in iPadOS. Here are some of the most important additions.

Note: Some of these multitasking features only apply to native Apple apps currently. Once iPadOS drops in the fall, we expect third-party developers to begin adding support for them.

Apps in multiple spaces on the new iPadOS

One of the biggest quirks in iOS has been the inability to have two instances of an application open. That’s fine for iPhones — but it has seriously hampered workflows on the iPad.

For example, who hasn’t had two browser windows or Word documents side-by-side on their Mac or PC? Now, in iPadOS, you can actually do the exact same thing.

How to open multiple apps side by side on your iPad

The feature is baked into both the Split View and Slide Over features in iPadOS. Here’s how to use it.

That’s all there is to it. You can now have anything from two Safari instances to two Notes open side-by-side.

Multiple apps in Slide Over

In addition to the small update in Split View, Apple has also completely revamped Slide Over in iPadOS. You can now have a “stack” of multiple apps running in Slide Over.

How to use the new Slide Over feature on iPadOS

That will allow you to keep multiple apps handy within another app. You’ll be able to quickly switch between them or see a very iOS-like multitasking view. Think of it as a small iPhone screen within your iPad’s larger display. Here’s how to work with it.

This will place both apps in a stack. From here, it’s just like navigating an iPhone screen with gesture-based controls.

To help you manage all of your open workspaces in iPadOS, Apple has also added a small feature called App Exposé.

Basically, the feature will quickly show you all of the open instances of a single app — even if they are in separate workspaces.

That’s how it differs from the iPad’s standard multitasking pane, which is activated with a double-click of the Home button or a swipe up from the bottom of the gesture bar.

The multitasking pane shows you complete workspaces, while App Exposé will only show you open app windows.

App Exposé is activated by pressing and holding on an app icon. A new menu should pop up — tap on Show All Windows to bring up App Exposé.

What are the new iPadOS Text Gestures

Some of the bigger changes to iPadOS have to do with text. Apple has revamped and refined the process of working with text on the iPad.
To do so, Apple has introduced a slew of new gestures. Some of these deal with quick text commands — like copying and pasting — while others make it easy to quickly place a cursor.

While they may take some getting used to, these text-based gestures should go a long way toward making writing and text editing much easier on the iPad.

On a similar note, you can now also type using QuickPath in iOS 13 and iPad OS. That means you can tap on a letter and quickly drag your finger around the keyboard to type out messages faster.

In iOS 13 and iPadOS, Apple has basically sounded the death bell for 3D Touch. The feature will stick around for the foreseeable future, but Apple is already in the process of getting rid of it.

That’s because, in iOS 13 and iPadOS, a long press will allow users to activate many features that were once 3D Touch exclusives.

The Quick Actions menu and the Peek function can now be activated with a long press. It’s not a perfect analog to 3D Touch, but it should bring 3D Touch-like features to a wider variety of devices.

Mouse support comes to your iPad

iPadOS also packs support for wired and Bluetooth mouses, although probably not in the way you may think.

Mouse support in iPadOS is actually an Accessibility feature. In fact, it’s an extension of the AssistiveTouch feature.

Because of that, you shouldn’t expect a full-fledged mouse experience with a traditional cursor. The iPadOS cursor is meant to mimic the size of a finger and its touch.

Mouse Tip – If your using iOS 13 and a mouse, instead of having to slide the home bar you can click on one of the lower corners of the iPad with the mouse it will act as a shortcut for going home.

But it’s there if you’d like to use it. Mouse support is activated in Settings —> Accessibility —> Touch —> AssistiveTouch —> Pointing Devices.

We hope you are excited to try out the new gestures on your iPad with the new iPadOS.  What are some of the new features that you are excited about? Please let us know in the comments below.