You are here: Home / iPad / Everything in the new Files app for iPadOS 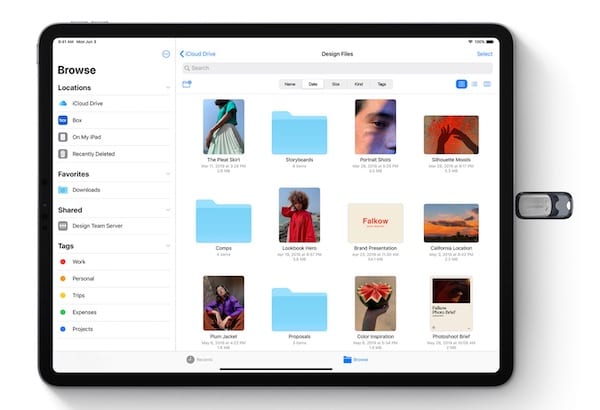 Back in 2017, Apple added a new native app called Files to iOS. While that sounded like the iOS version of Finder, it really wasn’t. But in iPadOS, Files is a bit closer to its macOS counterpart.

Apple has made a slew of changes to the Files app in iPadOS that deal with several common complaints about the tablet-based platform. In short, your iPad will now work much more like a typical PC. Here’s what you should know.

One of the most significant and most notable changes to the Files app in iPadOS is the inclusion of external storage support. Yes, that means you can plug in your USB drive or SD cards and access those files right from your iPad.

From here, you can simply drag-and-drop files from your iPad’s local or cloud-based storage to the device (and vice versa). Similarly, you can also work on these files without saving them to your iPad — and you save new files directly to the device itself.

Where is Local storage in Files App

In the last section, we discussed local storage. IF you’re familiar with how iOS has operated in the past, that may seem odd. One of the main limitations of the platform is the fact that users have always been reliant on cloud-based services for their local storage needs.

That’s no longer the case in iPadOS. You can now create folders, save files, and reorganize local storage directly on your device using the Files app.

As an example, users can now use the upcoming Photoshop for iOS to import images directly onto their iPads — without saving them to a cloud-based storage solution.

Similarly, iPadOS also lets you log into an SMB file server for remote access and management of files.

Computers have it; other tablets have it, even Android smartphones have it. Now, in iPadOS, Apple’s lineup of tablets officially have a built-in downloads manager.

That means you’ll be able to download content straight from Safari to your iPad’s local file storage system. This is a big change, as it’s one major feature that has been keeping the iPad back from being a full-fledged computer replacement.

Just download a file from Safari, and it’ll go to your Downloads folder — just like on macOS.

There is a caveat, however. Namely, the downloads folder is an iCloud Drive folder by default. Thankfully, you can change this behavior and save files directly to your iPad’s local, offline storage.

For those who are more comfortable working in Finder than Files, iPadOS has a small but welcome change. Specifically, there’s now a familiar Column View.

The iPadOS Column View also comes with a richer set of metadata, as well as a nice visual preview of selected items.

Leverage Quick Actions (like ZIP and UNZIP) in Files

The Files app in iPadOS also supports a suite of “Quick Actions.” Think of them as the type of options that might be available if you right-clicked on a file in macOS or Windows.

These Quick Actions are contextual. For example, if you activate the menu on a photo, you may see conversion or markup options.

To activate Quick Actions, just tap and hold on a file or folder.

One cool feature buried in the Quick Actions menu is baked-in zipping and unzipping of files. That means you can easily reduce the size of large folders or files for sending via email or cloud-based storage.

To ZIP or UNZIP a folder or file, just tap and hold on it and tap the Compress or Uncompress option respectively.

Notes on iOS has had a document scanning feature since iOS 12. In iPadOS, the Files app now has a similar function.

It basically works the same as the document scanner in Notes, except that you’ll be able to save scanned documents directly to the Files app as PDFs.

The document scanner in Files is also really easy to access

Apple has also made iCloud Drive a bit more robust in iPadOS with the addition of iCloud folder sharing.

Previously, users had the option to share individual files with one or more people. Now, they can share entire folders — and even give other people access to edit or add their own files to that folder.

This works through an iCloud link, too. That saves you from having to send actual attachments in the body of an email or message.

Determine Folder name of a document

You will find that you can search for any files or documents in the app using the Search box at the top. Either type in what you want to search for OR use the microphone icon to dictate it out.

If there are items matching your criteria, they will show up in the Search Results.

Unfortunately, the Search results do not provide the location information or the folder name at first glance. If you are trying to figure out the location or folder name of the item, gently press and hold on the item, till you see the context menu appear.

Tap on ‘Info’ and the locate the ‘Where’ field in the list of items to identify the Folder name of the document.

Computers have long been able to support multiple instances of apps — such as Finder or Safari. And now in iPadOS, Apple’s tablet can support this, too.

Having two Files windows open side-by-side is a pretty nifty feature. It also works exactly like Split View has in the past.

Of course, you can also drag the Files icon to the center of the screen for Slide Over.

We hope that you can make the most out of the new iOS 13 / iPadOS Files App. Which of these features are you looking forward to? Please let us know using the comments below.