You are here: Home / iPad / Is your iPad compatible with iPadOS ? Here’s what you should know

One of the major changes announced is the new iPadOS. This short article covers iPad compatibility for iPadOS and provides some of the highlights of this new OS for iPads.

Up until now, your iPad and iPhone ran the same operating system called iOS.

Starting in 2019 with the release of iPadOS, your iPads will run on an operating system that is different from the one running on your iPhone.

Main features of the new iPadOS

The major features announced with iPadOS are the following:

Is your iPad compatible with iPadOS?

Historically, when Apple has released a new operating system, it often drops support for the new OS on some of the most older devices as shown below:

There are four major iPad models that Apple currently offers. Many users have upgraded to these new devices over the last couple of years. 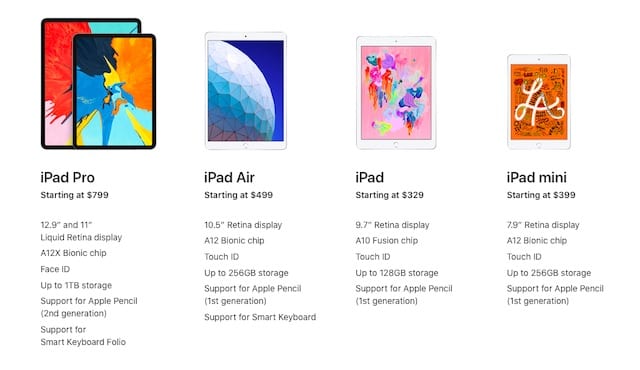 All the above newer models will support the new iPadOS. They will be able to leverage the new benefits offered by iPadOS.

According to information shared at the WWDC event today by Apple,

iPadOS will be available this fall as a free software update for iPad Air 2 and later, all iPad Pro models, iPad 5th generation and later and iPad mini 4 and later.

This means that the following iPads will be able to get an iPadOS update when the new OS is released in the fall.

We hope that you enjoyed the overview of the new iPadOS. What are some of the features that you are really excited about when it comes to the new iPadOS for your iPad?