You are here: Home / iPhone / Here’s everything new in Photos and Camera in iOS 13 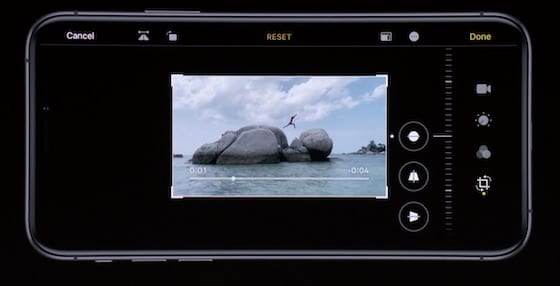 Apple has made a slew of sweeping changes to its mobile operating system in iOS 13 — including a laundry list of new features and changes to Photos and Camera.

Most of the camera and photo changes in iOS 13 are focused on browsing and editing, but there are some other clever and smaller refinements here as well. Here’s everything that’s new in the Photos and Camera apps in iOS 13.

One of the most major changes to photos and camera in iOS 13 is a completely revamped interface for browsing your images and videos.

The Photos tab itself will let users see their past images with various levels of curation. That includes a new Days, Months or Years highlight tabs.

In these new tabs, photo previews have been blown up to make browsing easier. The Photos tab can also be zoomed in and out with “pinch to zoom,” letting you see as much or as little of your library.

The entire experience has also been revamped to make for more pleasant viewing, including auto-playing Live Photos and contextual transitions — so you can relive important moments of your life with ease.

There’s also quite a bit of intelligence going on behind the scenes. In some of the more curated views, iOS will automatically detect “clutter.” That includes duplicate images, screenshots and pictures of whiteboards or documents. The system will hide these images in some views, so you only see “actual” pictures that you’ve taken.

These are just some of the major changes to Photos browsing. Here are some additional features, according to Apple’s website.

The Camera Roll (All Photos) placement has changed in iOS 13. It has been removed from the Albums tab and moved into Photos with many improvements to facilitate better browsing.

While iOS 12 added a variety of photo editing tools, iOS 13 will refine the experience to make it more powerful and easier to access.

For one, iOS 13 rearranges the photo editing suite so that most common controls — like adjustments and filters — are even easier to get to than before. Photos will now make editing options like exposure, contrast, saturation and white balance front-and-center by showing them off simultaneously at the bottom of the screen.

Each adjustment will also automatically display its intensity, so you can see how much you’re editing a photo at a glance. You can also see a particular adjustment affects an image individually. Tap on the editing option and you’ll see a before-and-after view of the effect.

Users can also control the intensity of any filter or automatic adjustments they apply to their images.

Notably, iOS 13 also includes a suite of video editing options for the first time. In past releases, the tools for editing clips on your iOS devices has been fairly limited or nonexistent. (At least, within the actual Photos app itself.)

To be clear, you won’t be creating full YouTube videos or anything with this suite. But iOS 13 now supports all of the existing photo adjustments, filters and crop tools for video editing. You can also quickly change videos from portrait orientation to landscape orientation.

All of these edits are also nondestructive. That means you can edit away to your heart’s content without worrying about overwriting the original video. Just undo your edits and the video will return to its original state.

Apple has also added a couple of new features baked into the iOS Camera app alongside the changes to the Photos browsing and editing experience.

For one, there’s a new Portrait Lighting effect called High-Key Mono. Apple says it’ll turn a subject monochromatic and overlay them on a white background for a “beautiful, classic look.”

Additionally, users will now be able to adjust the intensity of their Portrait Lighting modes.

At high intensity, subjects will have their skin smoothed out, their eyes sharpened and their facial features brightened. Lower intensities, on the other hand, will result in a much more subtle and “refined” look.

We hope you are as excited as us about the upcoming iOS 13 update which is scheduled to be released in the fall this year. What are some of the features that you are looking forward to?