You are here: Home / iPhone / Where is Camera Roll in iOS 13 and iPadOS? 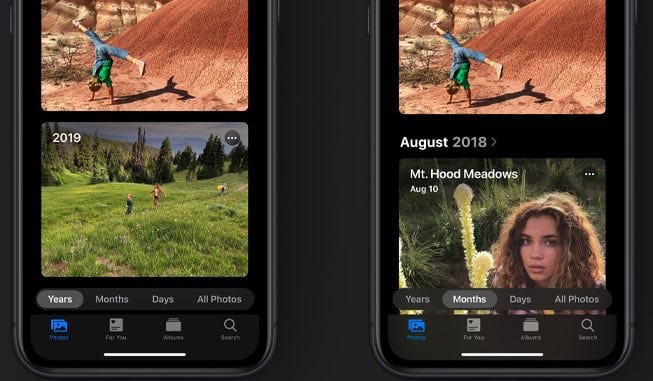 Not finding the camera roll folder on your iPhone, iPad, or iPad using iOS 13+ or iPadOS? The camera roll in iOS 13 and iPadOS is not missing in Photos. It has not been removed but moved to a new location in the new Photos app with some changes. If you can’t find the photos that you have taken yourself or saved online here’s how to locate these photos on your iPhone and iPad.

How to find your Camera Roll in iPadOS and iOS13

The Camera Roll is now under Photos in iOS 13. It used to be located in the ‘Albums’ in iOS 12. Users who have their iCloud Photos disabled used to see ‘Camera Roll’ as the first option in Albums.

First, you won’t find an item named “camera roll,” instead, Apple rebranded to it to “Recents.”

Unlike the earlier iOS Camera Roll,  Recents includes photos taken on your device itself AND any other photos saved or imported from other sources, including Safari or Messages, your computer’s Photos library, and other saved images from third-party apps.

So with iOS 13 and iPadOS, it is indeed hard to differentiate images taken with your device’s camera from any other saved images.

In order to get to the camera roll in the new operating system on your iPhone and iPad, open up the Photos App

In iOS 12, when you browsed all your photos in the default ‘All Photos’ album, you could tap ‘Select’ and then tap on multiple photos to select them or add them to the album via the ‘Add To’ feature at the bottom of the screen.

In iOS 13 and iPadOS, you can do the same action with some improvements.

When you are browsing ‘All photos’, the date range associated with the photos and the location information shows up on the top left corner of your screen. This automatically changes as you scroll up or down on the camera roll.

Tip: While browsing your ‘All Photos’, tap on the ‘Photos’ icon at the bottom left corner of your screen and it will bring you to your latest photos.

Your live Photos and videos will auto-play by default when you are browsing them in your Camera Roll. You can disable this by:

The other welcome change in iOS 13 Photos, is that when you share more than 3 photos with someone, it doesn’t automatically convert it into an iCloud Photo link but attaches these photos one by one.

You can, however, choose to ‘Copy iCloud link’ for the multiple selected photos and send them out.

For those who sync their Photos with their computer or MacBook, you may find it a little annoying at first since all these photos are added in with all your iPhone Photos.

What about the sorting order of Photos?

Note: If you do not use iCloud Photo Library, up until iOS 12, you still have a Camera Roll Album which is sorted by the last picture of when it was taken/added (regardless of the EXIF data).

iOS 13 has introduced behavior that existed briefly with iOS 8 when the Camera Roll Album was deleted. In this context, Camera Roll and the “All Photos” tabs are different. The All Photos tab sorts by the date of the EXIF data.

The photos app opens blazingly fast in iOS 13 and it is easy to use. The new app also features additional improvements in the Search function that will prove handy when you are trying to find something quickly.

A lot of our readers love sharing photos from album to album or sharing with friends and family via shared albums. But with the update, quite a few folks can’t figure out just how to do this!

How to add photos and videos from existing albums