You are here: Home / iPhone / How to Play Cyberpunk 2077 on iPhone With Geforce Now

Gone are the days where you were stuck with dinky little games on the App Store to kill some time. The App Store has exploded with some really great titles, which helped to spawn the Apple Arcade and its vast library of unique and fun games.

On one hand, it’s fun to play games that are designed specifically for our smartphones. However, the iPhone 12 is the fastest and most powerful smartphone on the market, and you likely would rather take advantage of the power instead of being limited.

What is GeForce Now? 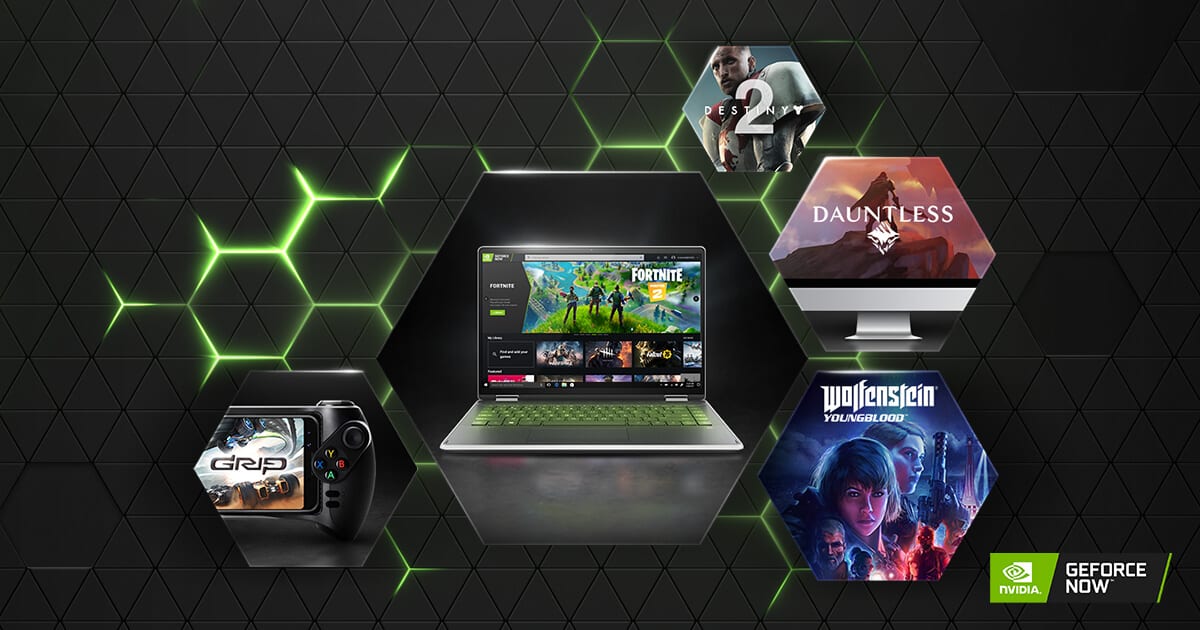 Game streaming has taken off over the course of 2020, and for good reason with more and more people staying home. Instead of spending hundreds of dollars (or more) on a new computer or console, you can play some of the best games right from your iPhone. We’ve seen Google Stadia, Project xCloud, and others burst onto the scene making it possible to play AAA titles right from your iPhone.

GeForce Now comes from NVIDIA, the popular pc part maker, and has a few extra tricks up its sleeve compared to the competition. GeForce Now is a cloud-based game streaming service, providing gameplay from the cloud to just about every device you could want to play on.

While GeForce Now already has a sizable library of games to choose from, you have the added benefit of syncing your library of games. This makes it possible for you to either buy games, or play your previously-purchased games, from anywhere. But the best part is that you don’t have to have a PC or even a computer in order to play those games.

What does the Founders Subscription get you? 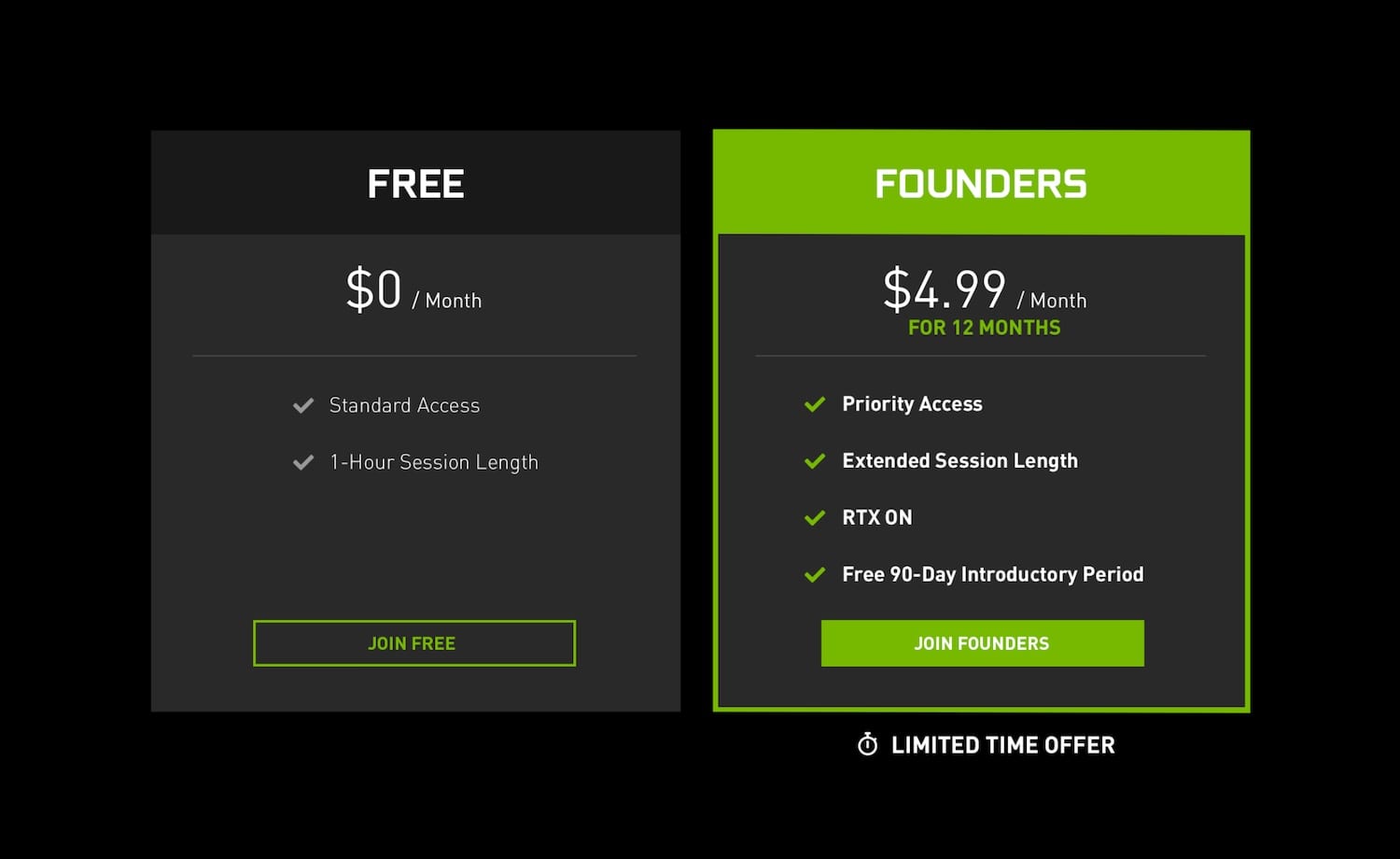 NVIDIA is also taking a different approach for its game streaming service than the competition. Instead of only offering a paid monthly subscription to play your games, you can play completely for free. There are two membership tiers, with the Free version providing up to a one-hour gaming session at a time. The problem with the Free tier is that you are only limited to one hour, and you might have to wait in a queue in the event that the servers are overloaded.

The second option is the Founders Membership. This provides Priority Access to the servers, along with an extended session length compared to the free tier. Since these cloud gaming sessions are powered by NVIDIA’s own servers, you are also provided access to real-time ray tracing paired with AI optimization for a great experience. All of this can be had for just $4.99 per month with the Founders subscription.

Regardless of which option you choose, there is one potential hinderance to keep in mind. The minimum requirement to stream games via GeForce Now is that you must have a minimum download speed of 15Mbps. If not, the games will not properly load and GeForce Now will inform you of the issues.

How to play CyberPunk 2077 on iPhone with GeForce Now 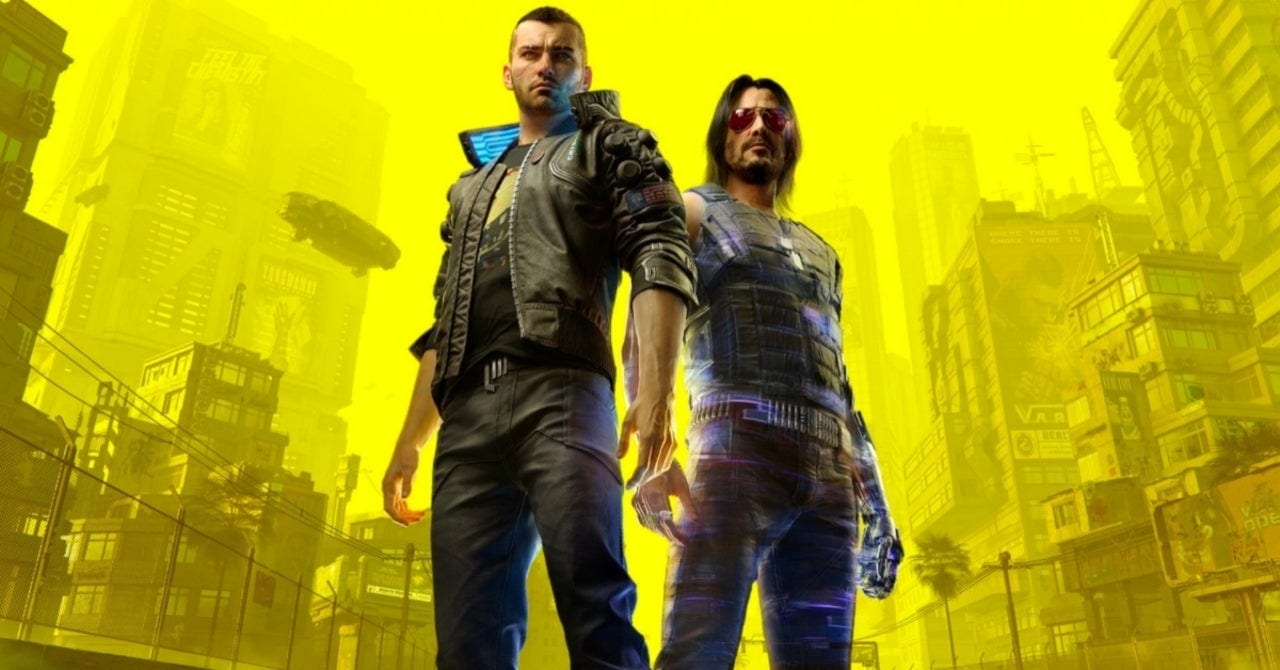 Unless you’ve been living under a rock, Cyberpunk 2077 was just launched for PC, Xbox, PlayStation, Stadia and more. And if you have a Steam account, you can purchase the game and then play it on your iPhone.

However, due to the rules of the App Store, workarounds have been put in place since apps like GeForce Now and Project xCloud do not meet Apple’s requirements. There have been rumors and rumblings that Microsoft, NVIDIA, and others are attempting to get these rules changed, but that has not come to fruition as of yet.

Since GeForce Now is not simply an app on the App Store, you’ll need to get everything set up and configured. Here’s how to get GeForce Now setup on your iPhone. 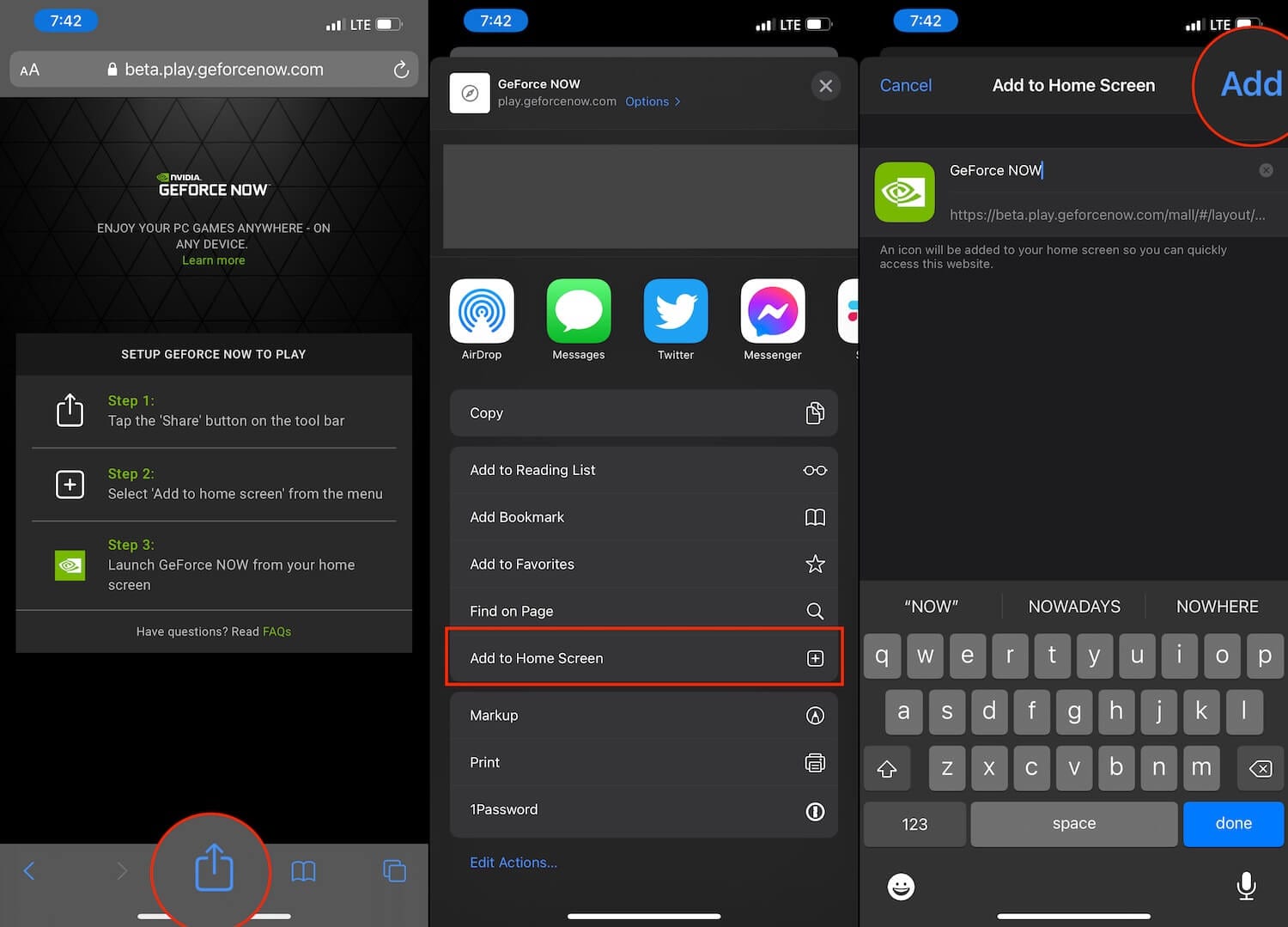 Now that GeForce Now has been added to your Home Screen, you are that much closer to being able to play Cyberpunk 2077 on iPhone. But there are a few more steps that you need to take before you can enjoy the biggest game of 2020. 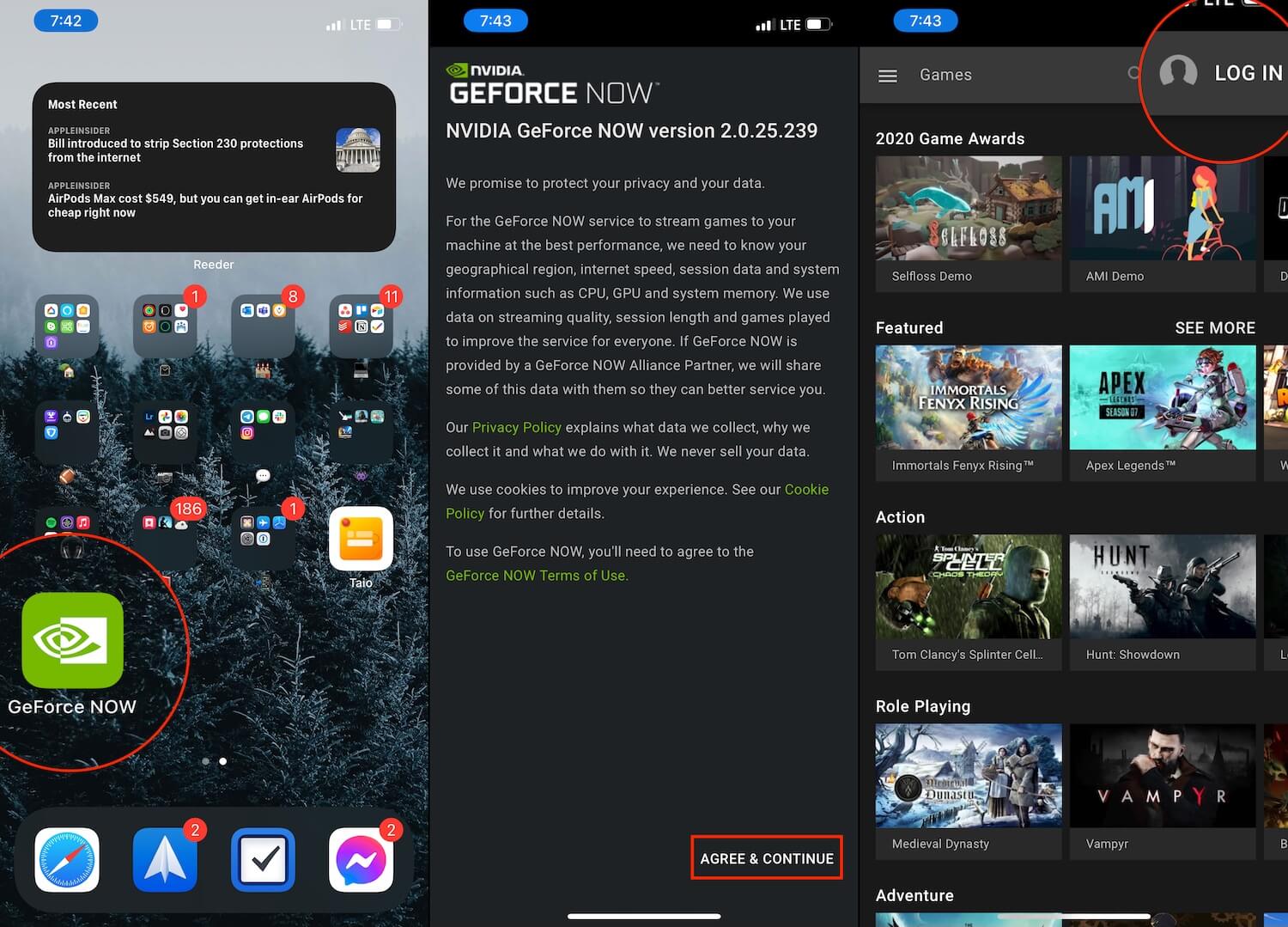 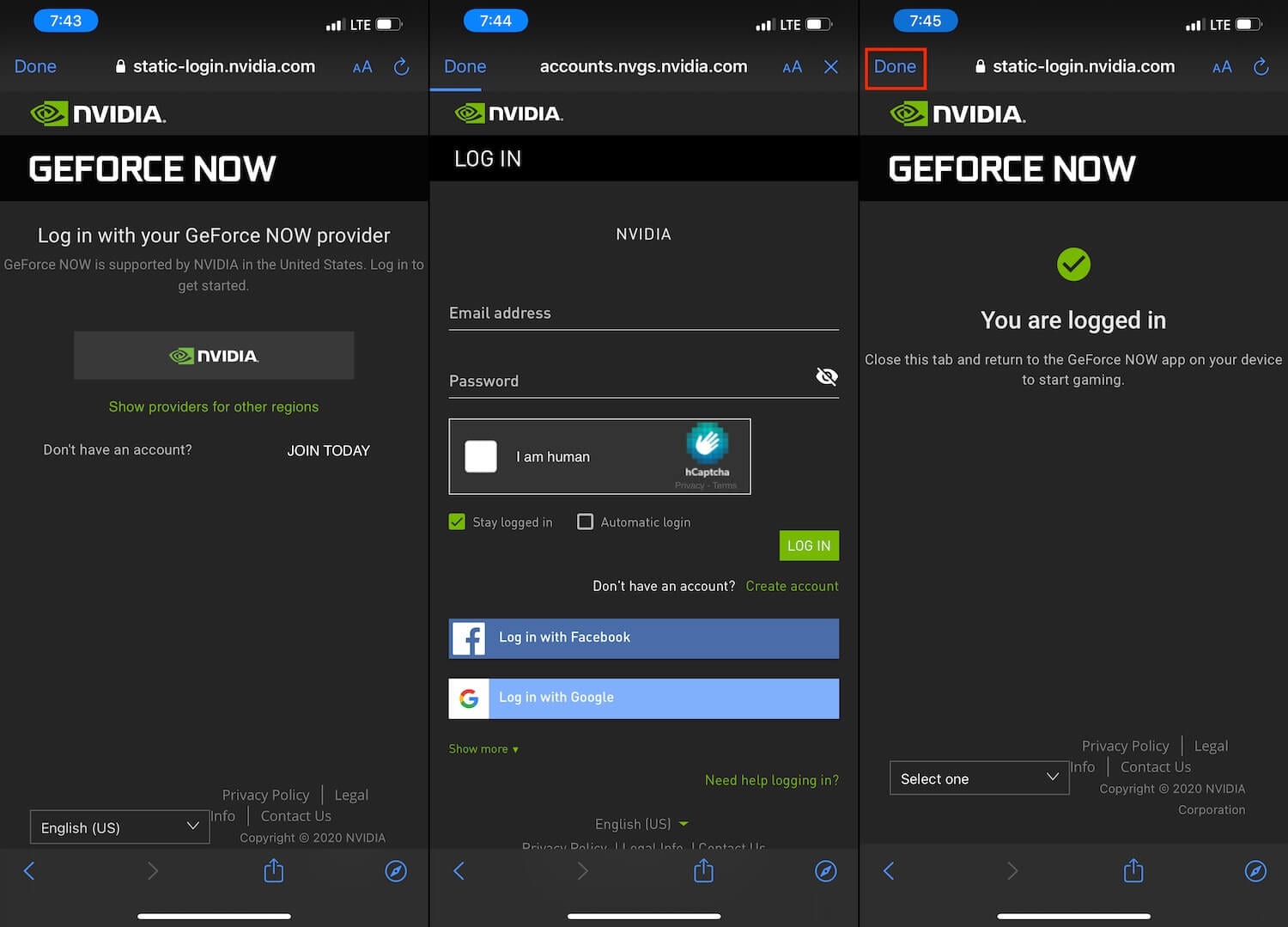 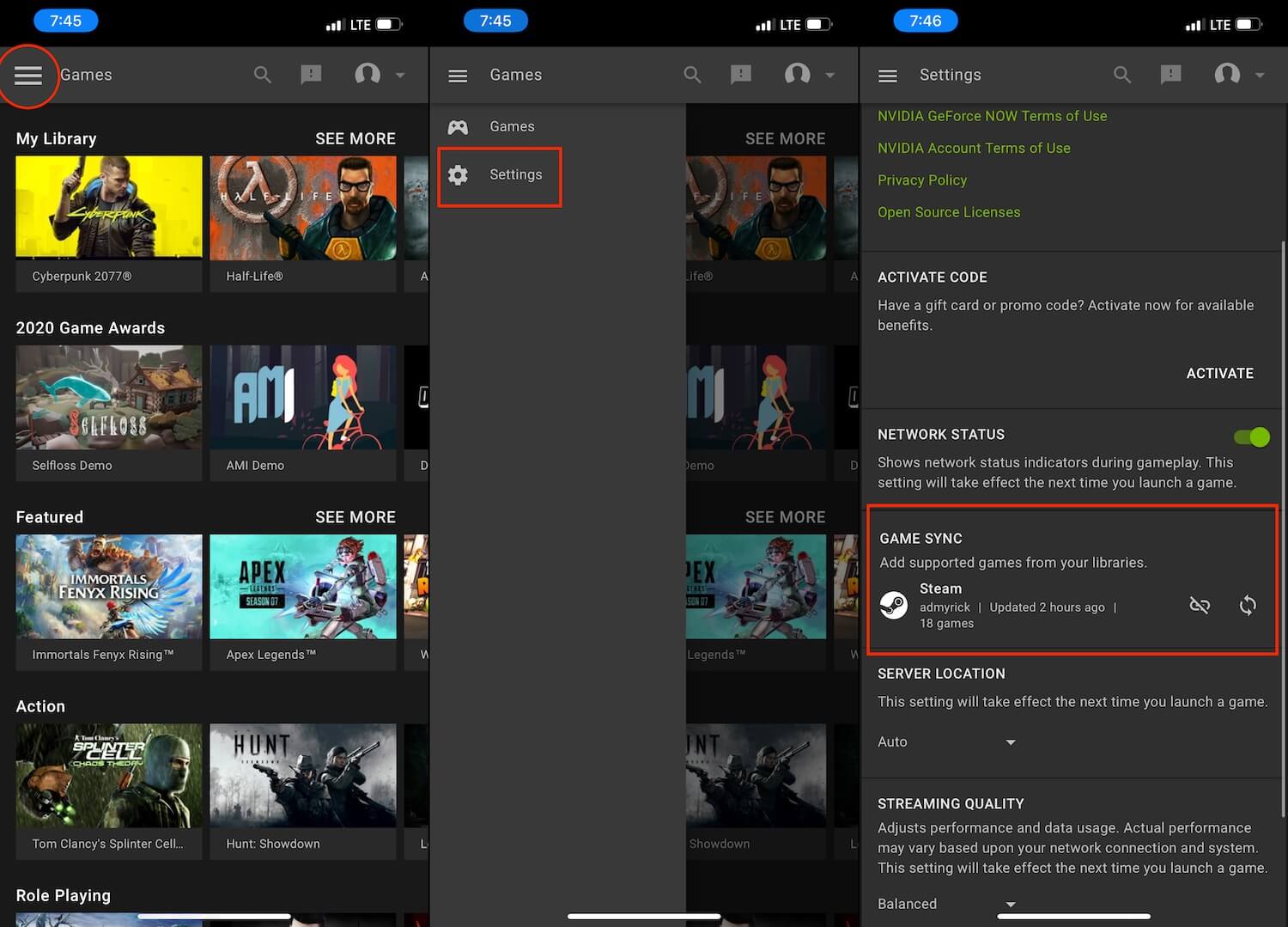 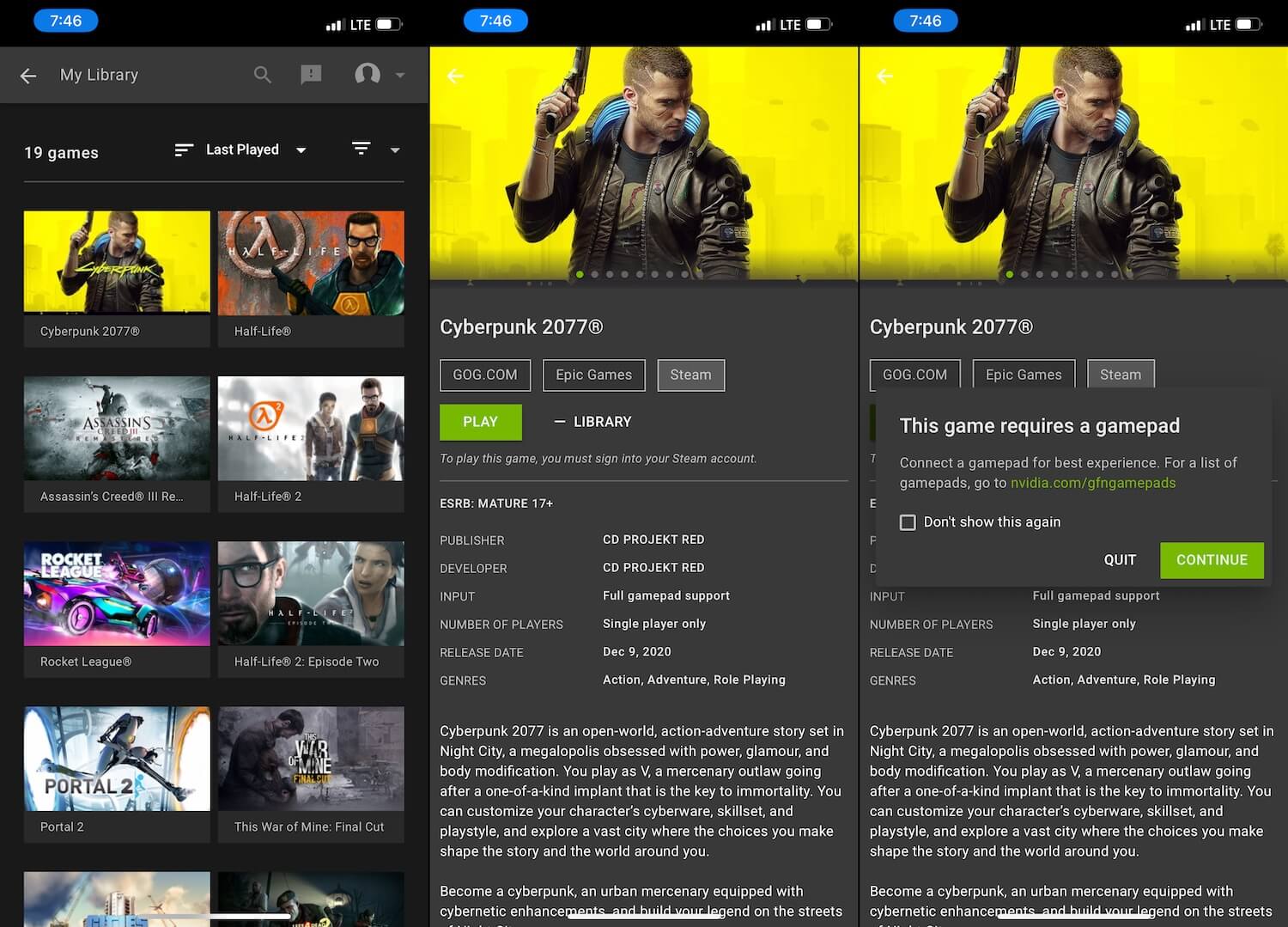 After you’ve logged into your Steam account, your library will automatically sync. It’s important to note that not every game in your Steam library will be synced. That’s because GeForce Now does not have support for the vast library of Steam games. However, there are quite a few that are supported, including classics like the Half Life series, Rocket League, and now, Cyberpunk 2077.

With your GeForce Now account created, and Steam account linked, it’s time to jump into playing Cyberpunk 2077 on your iPhone. Simply tap the GeForce Now icon on your Home Screen, locate Cyberpunk, and tap it to open the game. A warning will appear if your Bluetooth controller has not been connected, as you won’t be able to play with on-screen touch controls or gestures.

Get a controller to enhance your experience

Speaking of controllers and how you need one to play Cyberpunk on your iPhone, there are a couple of great options available. Chances are, if you’re a gamer, you probably already have a controller or two lying around in a drawer somewhere. But if not, here are our suggestions. 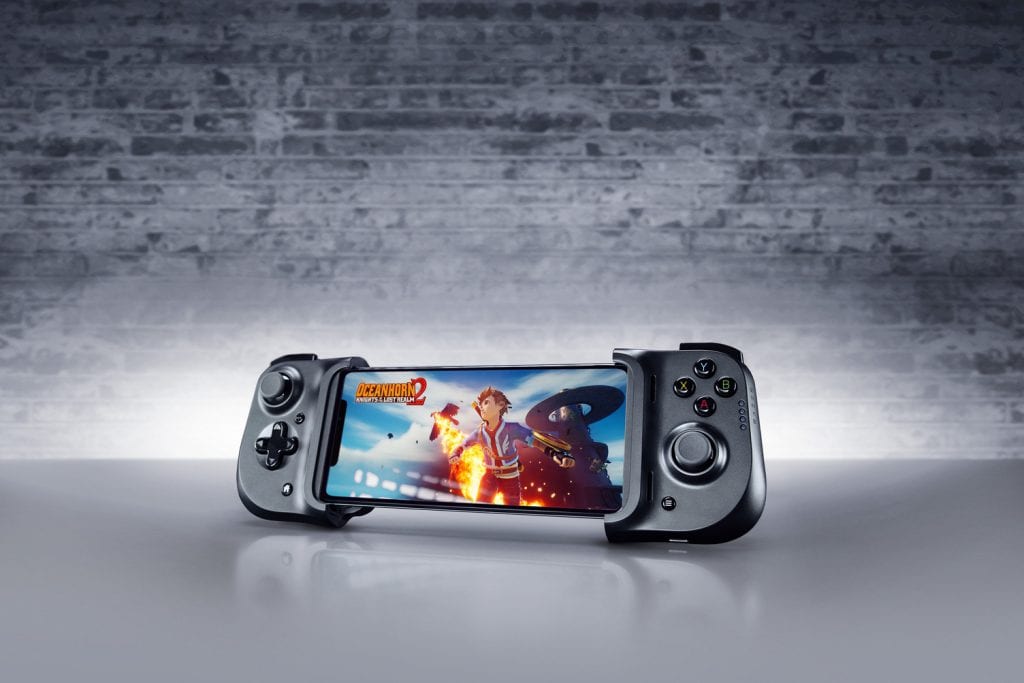 The Razer Kishi was released for the iPhone back in September of this year. Instantly, this turned into THE choice for those who want to turn their iPhone into a portable gaming system. Pair the Kishi with a phone the size of the iPhone 12 Pro Max, and you’ll be able to enjoy hours of gameplay without a hiccup. 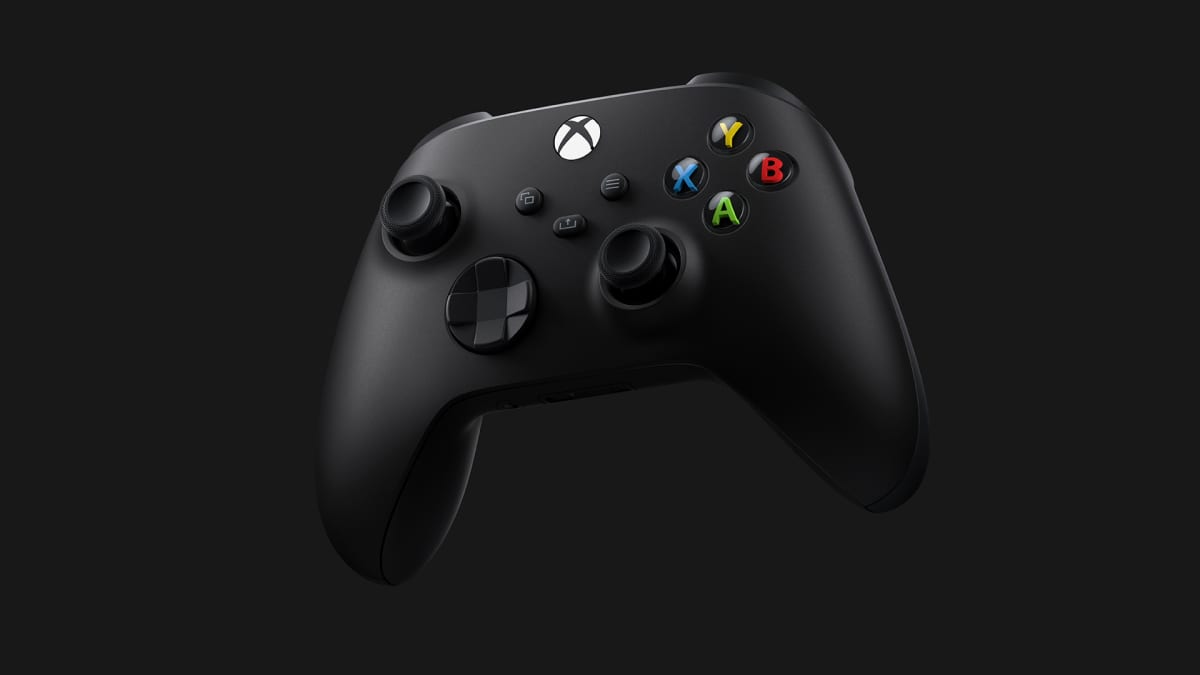 The Xbox Series X has arrived, and with it Microsoft introduced an all-new controller. But the best part about the new Xbox Core Controller is that it’s compatible with all of the previous generation systems, along with the likes of the iPhone and iPad. Unlike the Kishi, you’re going to want to grab a phone mount, and the PowerA MOGA Mobile Gaming Clip is the way to go. 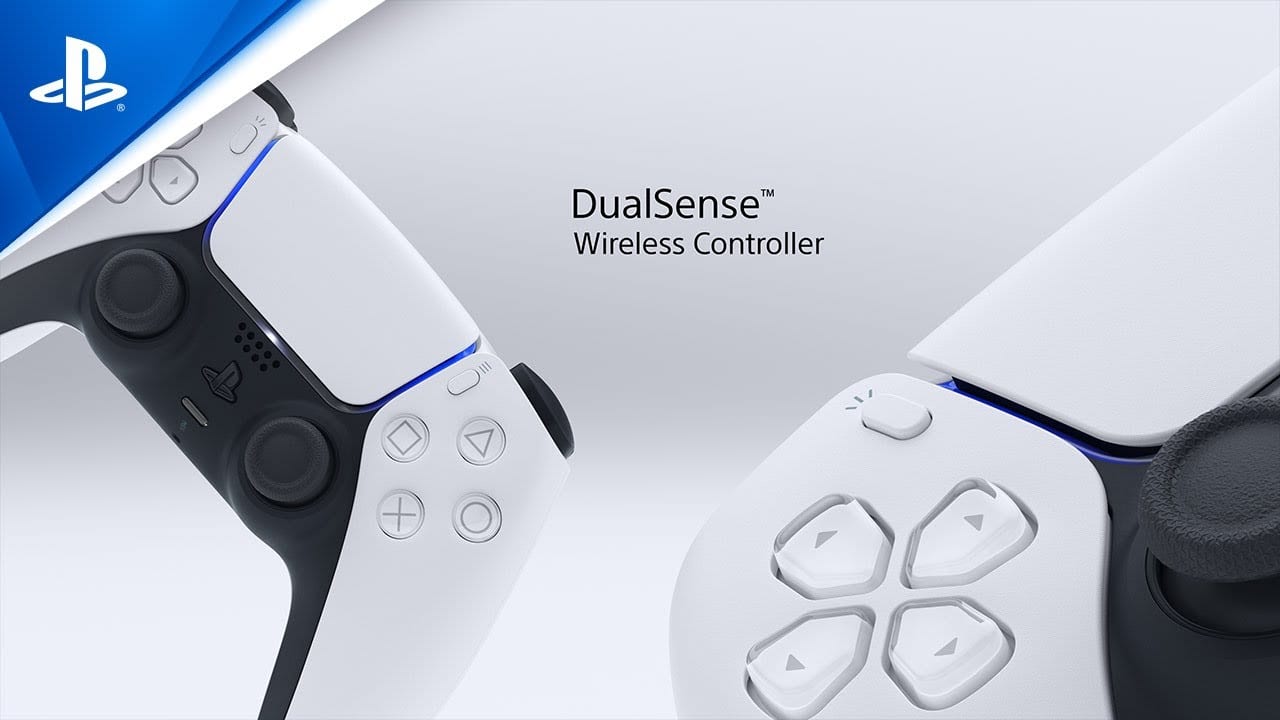 If you just picked up a PS5, or just want the new DualSense controller for your iPhone, this will work perfectly. Apple recently added support for the new PS5 controller in a recent iOS update. From there, you’ll simply need to pair it with your iPhone, just like you do every other Bluetooth peripherals. But as is the case with the Xbox Controller, you’ll need to get a phone mount like the one from Orzly.