You are here: Home / Apple Watch / Can You Replace Your iPhone With An Apple Watch?

It’s hard to believe that it’s already been two months since Apple announced the latest Apple Watches and another month since the announcement of the iPhone 12. And yet, here we are, closing out 2020 with nearly every product category in Apple’s lineup having been updated.

For Apple, most of these updates have been more than the typical spec bump. Apple’s computers are moving to a new chip set by the end of the year, the Apple Watch SE is the first budget Apple Watch ever, and the new iPad Air is now an iPad Pro competitor.

However, one thing remains the same from last year: The Apple Watch is still dependent on the iPhone. Less so than it has been in the past, but still, anyone wanting an Apple Watch has to have an iPhone.

In this article, we’ll explore why this is the case, how you can (almost) use your Apple Watch without an iPhone, and whether or not Apple is likely to free the Apple Watch from the iPhone in the future.

Can you replace your iPhone with an Apple Watch?

The short answer: No, you cannot replace your iPhone with an Apple Watch. Not really, anyway. 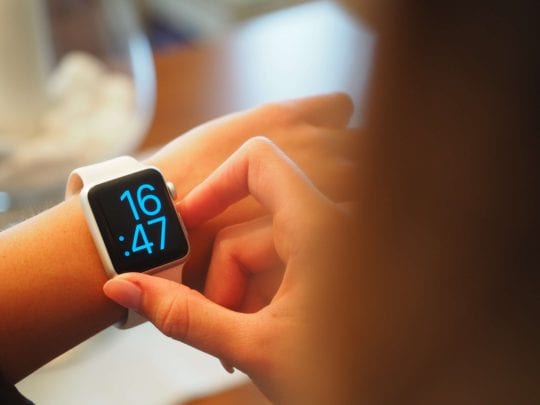 How to (almost) use your Apple Watch without an iPhone

With that out of the way, let’s discuss just how close you can get to replacing your iPhone with an Apple Watch. Surprisingly, it’s almost possible.

First things first, you’ll need an iPhone updated to the latest version of iOS. Then, you’ll need to buy an Apple Watch with cellular built-in. This will cost you more at checkout, but it’s a must if you want to use your Apple Watch without your iPhone. We also recommend getting AirPods, as Apple Watch has limited audio options without the (for instance, you can’t play music or podcasts without wireless headphones).

Once you have both of these devices, use your iPhone to set up your Apple Watch. This takes about twenty minutes.

After that, you will now be able to do most of the core things you can do on the iPhone on your Apple Watch. Calls, texts, listening to music, getting directions, checking restaurant reviews on Yelp, googling basic questions, reading web articles, and browsing Reddit are all possible with the Apple Watch. And if you’re using the cellular version of Watch, then you can do all of this without your iPhone.

Finally, place your iPhone in a drawer in your bedroom and only pull it out when you need it.

Why does Apple Watch require an iPhone?

If you’re like me, then the idea of ditching your iPhone for a solitary Apple Watch is a tempting one. In an ideal world, I would only need an iPad and Apple Watch for all of my tech needs.

It should come as no surprise to anyone that the tech in Apple Watch is much more limited than the tech in the iPhone. This is almost exclusively due to the Apple Watch’s size. It simply isn’t possible to power a processor with a battery that small.

Regardless, the Apple Watch simply isn’t powerful enough to be a serious iPhone competitor (yet).

Of course, it’s impossible to discuss something like this without mentioning the involvement of money. It’s hard to say for sure if Apple makes more in sales now than it would if it separated the Watch from the iPhone. Making the Apple Watch a standalone product would bring in new Android users, but it might also decrease iPhone sales.

At the very least, I’m sure the idea of a standalone Apple Watch has crossed Apple’s mind on multiple occasions and that it has seriously considered the impact it would have on sales.

Lastly, the Apple Watch can’t support a powerful battery in its current form. Sure, you can get a non-cellular Apple Watch through a full day of use without charging it, which is impressive. However, this requires the screen to be off for most of that time, for you to only use the watch a handful of times throughout the day, and for you to be connected to WiFi, not cellular.

Anyone who has tried using an Apple Watch on a cellular network knows how quickly it can drain your battery. You’ll generally need a midday charge and might still end the day with a less than 30% charge on Apple Watch.

If the Apple Watch was meant to completely replace an iPhone, this problem would surely become worse. Apple could always move the Apple Watch to a low-power network (like 3G), but this would slow down internet performance.

Will Apple ever set the Apple Watch free?

With these things in mind, it might seem like Apple will never set the Apple Watch free, or at least not for a long time.

But I’d argue the iPhone-free Apple Watch is closer than you might think.

First, during the Time Flies event, Apple announced Family Setup. This feature allows Apple Watch users to set up multiple Apple Watches using a single iPhone. Each Watch can send and receive unique messages, make independent Apple Pay purchases, and more. All of these watches still need to be managed through the attached iPhone, but otherwise, they are more or less independent. That’s a big deal.

Second, in an interview with Marques Brownlee earlier this year, Craig Federighi (senior Apple staff legend) was asked about the possibility of pairing an Apple Watch to an iPad instead of an iPhone. He was also asked about similar non-iPhone and Apple Watch pairings.

In response, Federighi acknowledged that Apple was aware of users who wanted this setup, but said the demand was currently too small to be seriously considered. Which could mean that Apple isn’t opposed to making this change, just that they don’t think now is the right time.

And third, long-term iPhone users will remember a time when you had to use iTunes to set up a new iPhone. That meant your iPhone was permanently tethered to your computer up until iOS 5. So there is a precedent for Apple loosening up on these sorts of restrictions.

What would it take for Apple Watch to be free from the iPhone?

For the Apple Watch to become a serious iPhone replacement, the first thing it needs is a faster, longer-lasting chip. As it is now, the chips in the Apple Watch do a fine job, but still lag a considerable amount more than the iPhone, even when new. If you factor in the diminishing returns of chips over time, it’s clear that a standalone Apple Watch would need more power backing it up.

2. Changes in the Apple Watch battery

Speaking of more power, the next thing the Apple Watch needs is an improved battery. As mentioned earlier, the current Apple Watch batteries already struggle to support cellular on their own. If these devices were also asked to completely replace an iPhone, it’s very likely that the battery simply wouldn’t be able to keep up.

For this to change, Apple needs to get much better at power management on the Apple Watch, find a way to include a bigger battery, or simply wait for advancements in battery technology (such as contactless charging).

watchOS certainly isn’t too underpowered, but it’s not the most robust interface, either. The simplest example of this is typing on Apple Watch. Sending a short message isn’t too difficult, but anything more and it quickly becomes a hassle to write on this device. 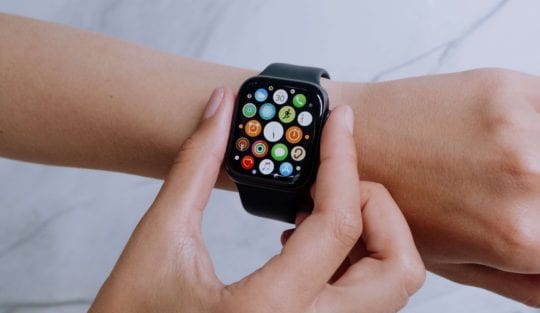 Additionally, Apple Watch apps don’t feel “complete” yet, at least not in my opinion. What I mean by this is that most Apple Watch apps still feel like miniature iPhone apps. It doesn’t feel like most apps have fully matured on watchOS or figured out how to capitalize on the Apple Watch’s capabilities.

So long as these apps feel like workarounds rather than real apps, the Apple Watch will have a hard time moving forward.

And of course, as is the subject of today’s article, the Apple Watch needs the ability to operate without an iPhone. This might mean making the Apple Watch completely independent, or simply allowing it to depend on other types of devices. 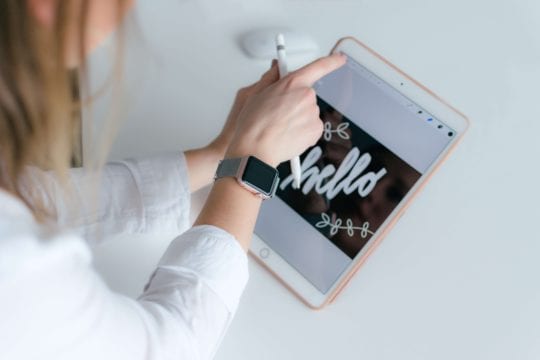 From what I can tell, this wouldn’t be that difficult to implement. All Apple would need to do is move the Apple Watch’s setup process from iPhone to iCloud. That way, any device that can sign in to iCloud (which is more or less any device you own) can link to an Apple Watch. iPad, Mac, Windows, Android – you name it.

What can’t Apple Watch do on its own?

So let’s say that Apple announced tomorrow that the Apple Watch would be getting everything I described above – a faster process, a bigger battery, a better interface, and set up with non-iPhone devices. Would that mean it was ready to tackle the iPhone?

Kind of, but probably not for most users. I think the current Apple Watch does enough to get away with replacing the iPhone, but there are some staples of iPhone that are still missing from the Apple Watch, even after all of these changes.

There are games on Apple Watch, but they are lightyears behind the games on iPhone. Most of them aren’t even as robust as the games on the first iPhone in 2007. Games like Pong, solitaire, and Breakout are about as much as the Apple Watch can take.

You could make the argument that this is a good thing (we already spend too much time on our devices as is) but regardless, it’ll be a while before gaming is a “thing” on Apple Watch. 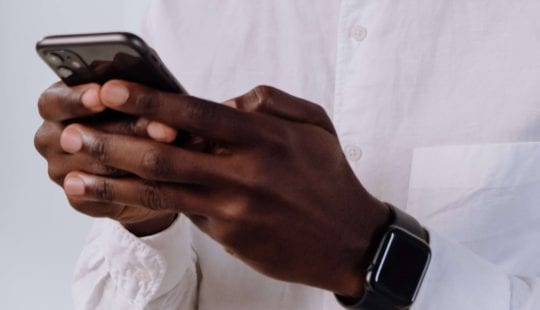 Another area that’s lacking on Apple Watch is productivity. As a freelancer, I use my iPhone for a substantial amount of my work needs. It helps me stay in touch with clients, track my income, schedule my assignments, and so forth. I can view and (sort of) interact with some of these things on Apple Watch, but the experience is lackluster.

I think the biggest thing holding the Watch back in this department is the lack of a keyboard. It’s simply too much of a pain to draw each letter with a finger, and saying things out loud isn’t very editable or private. For now, the Apple Watch is primarily a communications and fitness device, which means you’ll need a secondary device (like an iPad) for productivity.

The Apple Watch technically possesses the capability to play videos, but… do I need to elaborate on this? I don’t think anyone is ever going to be watching shows on their Apple Watch, at least not until Apple builds a projector into it.

No camera support in the near future (if ever)

Finally, the Apple Watch does not currently have a camera, and I think it’s unlikely to get one anytime soon. The cameras on the iPhone have just gotten to a high-fidelity standard in the last few years, and that’s with ample surface area, demand, and incredible engineers dedicating their careers to the endeavor.

You could make the argument that Apple Watch doesn’t need a camera, and this might be true. But I’d counter-argue that people are so used to being able to take a photo at a moment’s notice now that it will be hard for most to go back.

I think that it will be technically feasible for Apple to add a camera to the Apple Watch at some point, but I doubt that camera will be of decent quality or usefulness for a long time.

How much longer will the Apple Watch require an iPhone?

On the other hand, Apple is difficult to predict at times, and this certainly falls within the realm of ambiguity. Maybe we’re a year away from an iPhone-free Apple Watch, and maybe we’ll never see one. That won’t stop me from dreaming, though.