But is it really such a good deal?

In this post, we’ll explore the differences between the two to help you decide which option is right for you. Let’s start with an overview of each option.

The Apple Watch SE is one of the newest members of the Apple Watch lineup, launching with the Apple Watch 6 and starting at just $279. This makes it approximately $120 cheaper than the Series 6, depending on which upgrades you decide to get.

The differences between the Apple Watch SE and the Series 6 are pretty minimal. You won’t get an always-on display, an ECG monitor, or a blood oxygen monitor. You’ll also be getting the S5 chip instead of the new S6, so performance will be slightly less robust.

Other than that, there isn’t much separating the two, making the SE a great value for the money.

The Apple Watch Series 3, on the other hand, has some more significant differences from the Apple Watch SE. First, it starts at just $199, making it the lowest cost Apple Watch officially available from Apple. To put that price into perspective, the AirPods Pro cost $249. So for an Apple product, the Series 3 is actually… affordable?

That said, Series 3 is also three years old at the time of writing. Apple Watches don’t have the most reliable lifespans, becoming buggy and laggy after about two years of daily use. However, most of this lagginess is caused by battery degradation as opposed to an outdated device. When you buy a new Series 3, you’ll also be getting a new battery, so you probably won’t experience lagging for quite some time.

With this in mind, it’s tough to pitch the Apple Watch Series 3 as a budget-friendly version of the Series 6. It has a different physical design, a much older chip, and will probably show its age faster than the Apple Watch SE. However, it’s also reasonably affordable, which makes this whole deciding business a bit trickier.

To help sort things out, here’s a side-by-side comparison of the Apple Watch SE and the Apple Watch Series 3. Below, we’ll cover the main points users will care about when deciding between these two devices.

Let’s start things off with the feature on most people’s minds.

While $80 isn’t as much as the price difference between the Series 6 and the SE, it’s substantial enough to put the Series 3 in its own league. It makes the Series 3 a more appealing buy for teens, kids, and people who simply don’t care to have the latest features.

However, as we’ll explore, that $80 is getting you a lot of value. Series 3 and SE are completely different devices, and you will most certainly have a different experience depending on which one you pick.

Part of what makes the experience so different for each device is the change in features. First, the Apple Watch Series 3 does not offer a cellular model. If you want to be able to use your Apple Watch without having your iPhone on you, then you’ll need the Apple Watch SE and newer.

Both the Apple Watch SE and the Series 3 are missing blood oxygen monitoring and an ECG monitor. 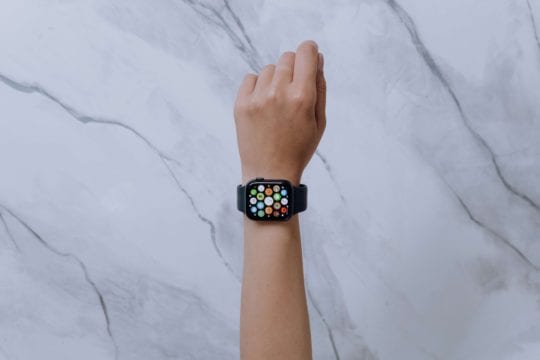 When looking at the two devices, it’s impossible not to notice how much more dated the Series 3 looks than the SE. The Apple Watch Series 3 uses the original screen that the Apple Watch first shipped with, which is a small rectangle with sharp corners.

The SE, on the other hand, uses the updated display with rounded corners. This allows a much bigger screen to fit in the same physical body as the Series 3 and increases the amount of information that can be displayed within apps. While this is only a few millimeters of difference, the Apple Watch is small enough that these millimeters are glaringly obvious.

Physically, there is not much difference between the two devices. If the two were turned off and sitting side by side, I doubt most people would be able to tell which is which. Both devices work with all of Apple’s watchbands, so you won’t be missing anything in this department.

The one design difference that exists between the two is the colors offered. Both devices come in silver and space grey, but only the SE offers an additional gold option. If your heart is set on gold, then you’ll have to go with the Apple Watch SE.

Last, there’s performance. The Apple Watch SE uses the S5 chip, which performs twice as fast as the S3 chip found in the Series 3. This is a noticeable enough difference that you will probably notice the lag. However, this is not the biggest concern. The biggest concern with the S3 chip is that it means your Apple Watch Series 3 is going to become obsolete much faster than the SE.

The Series 3 is also using an older version of Apple’s wireless chip, the W2. This chip (also found in AirPods) is used to make the connection between your Apple Watch and your iPhone smarter. The SE uses an updated W3, which improves the speed and reliability of your Apple Watch’s wireless connection.

While both are great devices, we’d have to recommend the Apple Watch SE for the vast majority of users. $80 certainly isn’t a small amount of money, but when you factor in everything you get for that $80, it seems worth it. The Apple Watch Series 3 is better suited for kids or elderly family members who just need basic, simple communication features. If you want something more than just getting notifications on your wrist, though, then the SE is worth every penny.

What is the Apple Watch SE?

You can read more about the Apple Watch SE in our comprehensive review.

How much does the Apple Watch SE cost?