You are here: Home / iPhone / Switch From Grid to List View in iOS 14

One of the major improvements Apple made with this update applies to the home screen organization. Users may not notice it at first, but users will now be able to quickly download stock widgets and, after swiping right after the last home page screen, see all of their installed widgets organized by category. You’ll also be able to hide app icons from the home screen and access them through an App Library. All this being written, the iOS 14 home screen is much more customizable than the iOS 13’s.

However, one home screen feature of the update seems to be shrouded in more mystery than the others. Rumor has it that iOS 14 users will be able to sort their home screen apps in a list view — using different filters, too.

We can’t tell you why this feature is speculation, but we can tell you that we’re excited to see it implemented. If Apple does, in fact, include this feature in the stable iOS 14, iOS users won’t be stuck searching through endless icons to find an app they need. The grid view can get messy anyway, especially if you aren’t a user who is on top of app folder organization.

The list view will be an actual page on the home screen and list out every app you have installed on your iOS device. You can sort these apps by different filters for different views, too. These include unread notifications, last used, most used, etc. Siri will also power suggestions for which app you may want to open.

The iOS 14 list view is all about convenience and a welcome upgrade. It makes your apps much easier to find. So often will Apple implement major aesthetic redesigns and specific built-in app updates, but improving usability is equally as important to iPhone and iPad users.

There is Already a List View Option in Another Apple Product

The list view for apps already exists in one of Apple’s other products, the WatchOS. It makes sense that a small screen would need a better app organizational system. You only have so much room to tap on icons. Apparently, the iOS 14 list view will look similar to this one.

If you have an Apple Watch already and want to see what we mean, change your app layout from grid to list. 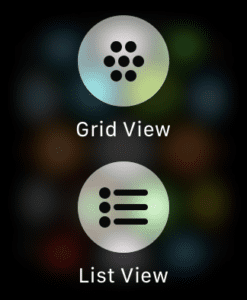 When you go back to your apps, you’ll see that they are now organized in a list. The icon for each app appears to the left of its name. You can swipe scroll through the list to easily find the one you want.

We can’t be entirely sure when Apple will release the iOS 14 to the public. Everything in 2020 has been, to put it plainly, hectic. If Apple stays on track, though, we could see the iOS 14 out around the same times as previous releases of other software upgrades. Releases usually happen between the second and third weeks of September.

If the release is delayed for any particular reason, you can always join Apple’s beta testing group. It does cost money, but it gives you exclusive access to beta versions of new upgrades.

What Other Features Can We Expect?

Outside of the home screen redesign and cryptic hints at the list view, this upgrade significantly gives Siri a makeover, gives you a picture-in-picture option (like the one the iPad has had for a while now), introduces a revamped Maps application, and rolls out a new feature called an App Clip.

App Clips are offered on an app by app basis. In other words, the app has to offer the App Clip; iOS 14 doesn’t force it. With this feature, you can download a part of the app without committing to the entire thing.

Oh, and Apple is finally easing up on their defaults! That’s right. You don’t have to use their built-in browser and email defaults anymore. You can set third-party software apps as defaults instead.

If you are using an iPhone 6/6S and above, you’ll be able to download the update.

If we do get to see the stable version of iOS 14 this fall, it’ll be interesting to see whether or not the hushed list view feature will remain a part of the upgrade. It would certainly make navigating through the phone a whole lot easier!