Hey there, and welcome to another month of the best iOS apps and the best macOS apps. In this month of August, we’re going to be exploring a variety of apps that will help you secure your home, replace PhotoShop for free, and relax as summer comes to an end.

If you’re new to this series, here’s a quick recap on what it’s all about:

Each month, I seek out the best apps I can find on iOS and macOS. These apps are not the same set of apps you’ll see mentioned on other lists across the internet. These are largely independent or open source apps that solve unique problems.

There is the occasional app that I think is a must-have for everyone. But for the most part, we’re going to be looking at interesting, obscure apps that will scratch an itch you didn’t know you had.

And as always, I am not affiliated with any of these apps. These are my honest and unbiased opinions. So with that in mind, let’s get into it!

Yep, you read that right. Presence is an app that allows you to take old iPhones you have laying around and turn them into security cameras. And best of all, it’s free.

Essentially, this app works by using your old iPhone’s camera. Just mount your iPhone somewhere that you’d like to keep track of. Then, install this app on it. Your iPhone will watch its surroundings using the camera, and when it noticed motion, it’ll take a snippet recording and save it. 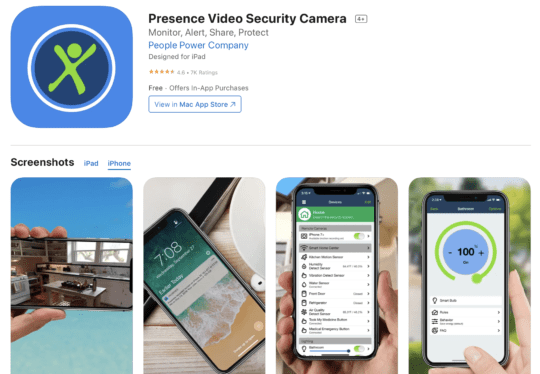 And that’s pretty much it! Of course, you’ll probably want to mount your iPhone some place where it can remain plugged in. That way you don’t have to keep taking it down and charging it. And, also, you’ll need an old iPhone to pull this off. But if you can swing both of those things, this can be a super valuable app!

2. Notability: The best note taking app for all of your Apple devices

Ok, this one is technically available on your Mac, iPad, and iPhone, but I decided to go ahead and place it here. That’s because I largely used this app on my iPhone and iPad when I had it back in college.

As said in the title, this is the best note taking app. Seriously. First of all, it allows you to type your notes and drag them around to keep them organized. Super handy, already an improvement over the default Notes app where your text is locked in place. 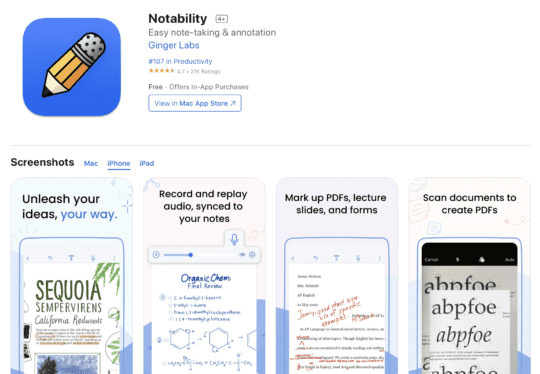 Second, you can combine handwritten notes with your typed notes. You can use an Apple Pencil, stylus, or even your finger to do this. Great for when you need to include a drawing along with your notes or even for those who write faster than they type.

Third, you can include audio recordings with your notes. And they sync with your notes, so you can match audio snippets to the notes you’re taking, rather than the two being treated as separate things. Great for when you want to come back to certain points during a lecture. Just make sure you check with your instructor first, as lectures are considered copyrighted material!

And finally, Notability allows you to scan documents into your notes. So you can scan assignments, whiteboards, handouts, and more directly into the app.

Have I sold it enough yet? Check this one out!

Long-time readers of our monthly series on the best iOS apps may be familiar with Better Touch Tool, or BTT. It’s a Mac app that allows you to map commands to gestures on the trackpad. Super handy for automating tasks and creating custom shortcuts. 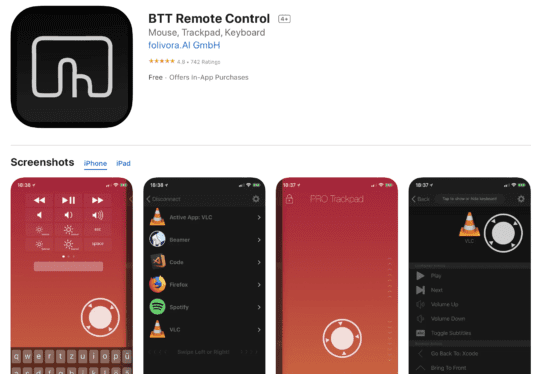 If you have both of these apps, then you can use BTT Remote Control to control certain apps on your Mac from your iPhone. It basically acts as a trackpad, allowing you to move your mouse cursor around, clicking around just like you would with a mouse or trackpad.

You can also type on your Mac from your iPhone, create global actions that work in all of your apps (such as a copy/paste button), control media with play, pause, and skip buttons, and use the Menu Bar of any app.

It’s definitely not for everyone, but it can create some pretty interesting workflows depending on your needs. And if you’re someone who has a disability, you may find that using your iPhone to control your Mac is works better than using the typical Mac peripherals. So check it out!

4. Tunity: Magically tune in to any TV station with one of the best iOS apps

This is perhaps the coolest app I’ve recommended all year, even if its purpose is a little unclear.

In essence, this app allows you to “tune in” to any TV station that is currently playing on a nearby TV. You can do this at home, the doctor’s waiting office, a restaurant, etc. Just open the app and it’ll start listening to the TV. 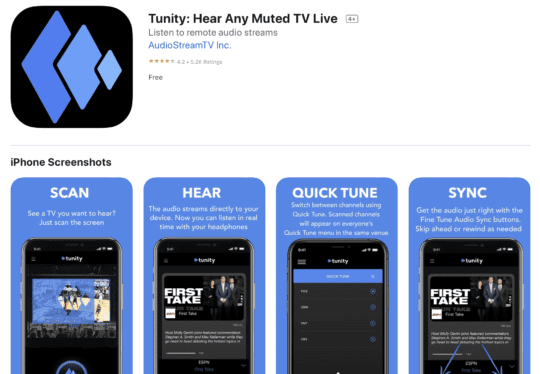 After a few moments, it should be able to determine what channel is currently playing. Then, it’ll play the audio from that TV on your iPhone.

Have you ever been in that situation where something is playing on a nearby television, such as a sports game or an old TV show you love, but you can’t hear it because the room is too loud? Well, now you can listen to it from your iPhone in real-time. You can even use headphones to sweeten the experience.

Best of all, this app is totally free, no in-app purchases or anything. It feels like Sci-Fi wizardry, but works pretty well in most situations. Kind of like Shazam for television. Try it for yourself!

The best macOS apps of August 2022

1. Poolsuite FM: Music and vibes for the end of summer (and beyond!)

Now that we’ve covered the best iOS apps, it’s time to dive in to the best macOS apps. And kicking things off is Poolsuite FM, one of the most fun apps I’ve come across in a long time. 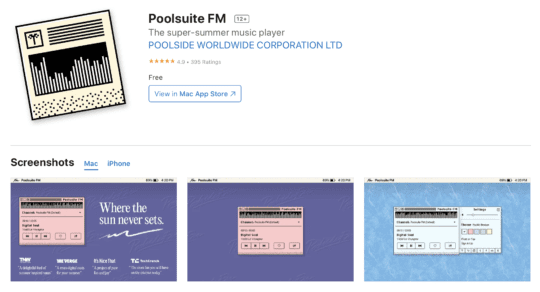 Poolsuite FM is an app for listening to music. Specifically, it plays chill, summery music from unsigned artists, so you’re guaranteed to hear music that you haven’t heard before.

But that’s only half of what makes Poolsuite FM so great. The other half is the design. This app is designed to resemble an old FM radio or maybe even an old school app from the 1990s.

However you look at it, the chill pink color and soothing musical tones are great for whenever you want some background music to listen to while working, reading, or creating. Like many of the best apps, it’s totally free, so give it a download!

2. DaisyDisk: A new way to visualize your disk space

Even if you have a Mac with 1TB or more of storage, eventually, you’re likely to the limits of what your Mac can store. And let’s face it, most of us don’t have 1TB+ of storage anyway.

But when you do hit your storage’s max capacity, you may be wondering where all of your gigabytes have gone. After all, that’s hundreds of gigabytes of storage that have been eaten up. 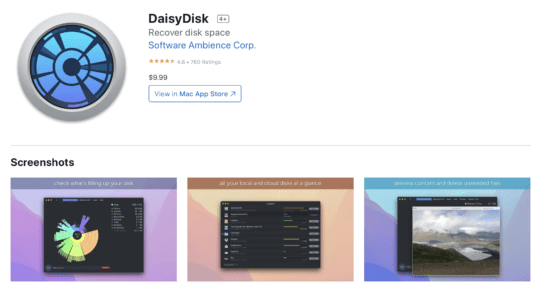 A lot of the time, we don’t know where our storage is going or how it’s being used. That’s where an app like DaisyDisk can be a big help. It helps you visualize how your storage is being used in a unique, organized way.

You can quickly see what’s taking up the most storage on your Mac, check different categories, and so on. And even better than that, you can interact with your storage as well. DaisyDisk makes it easy to drag-and-drop items in your storage to delete them so they aren’t taking up space on your disk anymore.

This allows you to quickly recover storage space while also understanding how your storage is being used. It’s a super popular app with rave reviews. It is $9.99, but that’s just a one-time purchase. So if this is something you think you’ll use, definitely give it a whirl!

Third on our list of the best macOS apps is MindNode. As a writer, I’m a big fan of mind-mapping. For those that don’t know, it’s a brainstorming technique where ideas branch off of a central idea, becoming increasingly detailed as you go. It’s great for outlining an essay, working on a book or art piece, designing a video game, and a plethora of other stuff. 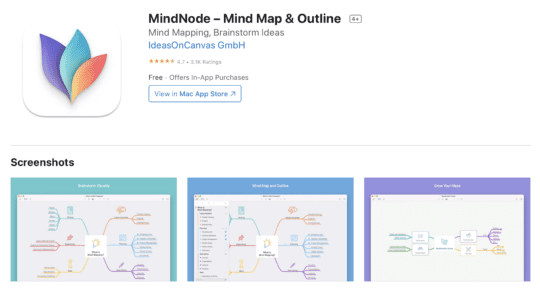 Oddly, I haven’t been able to find too many apps that I think do a great job of digitizing the mind-mapping process. Fortunately, that’s changed with MindNode.

MindNode doesn’t really do anything mind-blowing. It just makes mind-mapping on your Mac simple. The design is elegant and attractive, the features are straightforward and easy to understand, and you can keep things as simple or as complicated as you like.

The one drawback of this app is that you’ll need to subscribe to it to access all of its features. There is a free version, though, so you can decide how valuable the app is to you before deciding to subscribe.

I was so shocked to find that I’d never mentioned GIMP in this list before that I just had to bring it up now. For those that don’t know, GIMP is an app that allows you to manipulate photos in just about as many ways as PhotoShop. And best of all, it’s totally free. 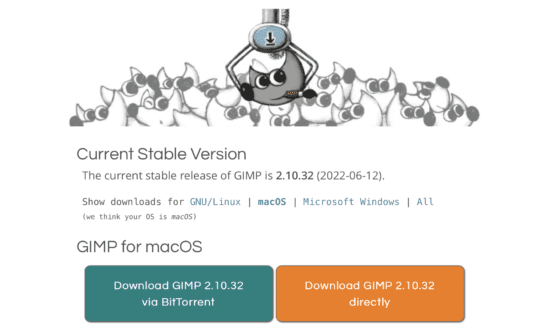 And that’s more or less it! There’s not much to GIMP, other than serving as a decent alternative to PhotoShop. It’s definitely not as powerful, so if you are a graphic designer or photographer, then you should probably stick to PhotoShop.

But for those who just need something to edit photos and graphics every once in a while, GIMP has you covered. It’s open source as well, so if you’re a developer you can help improve GIMP as you use it.

And that’s it! Those are our recommendations for the best iOS apps and the best macOS apps. If I had to pick favorites, I’d probably go with Notability, Poolsuite FM, and DaisyDisk. Let me know which ones you’re planning on using in the comments below! And tune in next month for even more great apps.