You are here: Home / HomePod / What’s the Difference Between the HomePod and the HomePod mini? 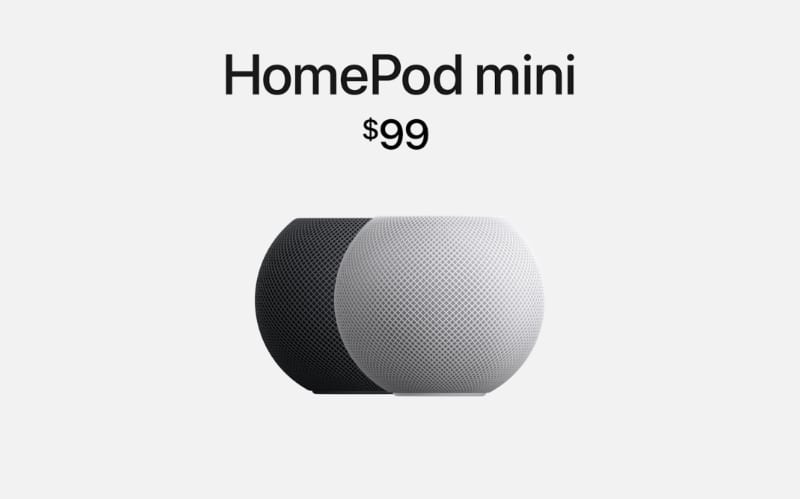 At Apple’s “Hi, Speed” event on September 13, the tech giant introduced the world to a new smart speaker: HomePod mini.

Unlike the original HomePod, the HomePod mini is much smaller in size. It also has a much lower price tag, coming in at only $99. But what do you lose to get such a low price?

There are a lot of similarities when comparing the original HomePod and the HomePod mini. Before delving into the differences, we thought it best to explain everything that remains the same between the two speakers.

The main function of most smart speakers is to play music. With both the HomePod and HomePod mini, it’s easy to stream music from your iPhone using Apple Music or a range of third-party services.

You can listen to podcasts, audiobooks, Pandora, and even Spotify on your HomePod. Use either HomePod to play your favorite playlists, create an artist radio station, or choose music for you based on genre and mood.

Both the HomePod and the HomePod mini are smart speakers. That smart element means you can also use them to activate Siri.

Just say “Hey Siri” to issue a command or ask Apple’s virtual assistant a question. You can use Siri to play music, check the weather, look up facts online, or get an update of your day.

Both HomePod speakers feature multiple microphones, designed to hear your requests from anywhere in the room, even if you’ve got music playing at the same time.

Either HomePod can also use voice recognition to distinguish your voice from other people in your house, allowing it to send messages or issue phone calls from the right person’s iPhone instead of someone else’s. Voice recognition also means Siri can suggest music based on your particular musical taste.

With multiple HomePod speakers, you can choose to listen to different music in each room of the house or you can perfectly sync every HomePod to blast your music throughout every room.

It doesn’t matter if you have a HomePod or a HomePod mini, they work together with multiroom support in the same way.

However, you can’t pair a HomePod with a HomePod mini in this way. You need to use two speakers of the same type for balanced audio instead.

Apple’s new Intercom feature makes it possible to send voice messages to other people in your home, playing them through HomePod speakers, iPhones, and even AirPods to capture everyone’s attention.

Although Apple announced this feature alongside the HomePod mini launch, it’s actually coming to the original HomePod as well.

You can use Intercom to let people know when you’re heading out, when you’re on the way home, or to easily send a message to someone across the house.

As you can see, your experience using the HomePod compared to the HomePod mini is unlikely to change that much. Both smart speakers run the same software and offer almost identical features.

But they aren’t exactly the same speaker, so it’s important to look at the differences as well.

Perhaps the most important difference between the HomePod and the HomePod mini is the price.

The HomePod launched in 2018 at a whopping $349, making it one of the most expensive smart speakers on the market. Apple eventually dropped the price to $299, but that’s still three times the price of the HomePod mini.

The HomePod mini launches at only $99.

While that’s still more expensive than smaller speakers from Google and Amazon, it’s a heck of a lot more affordable than the full-size HomePod.

The original HomePod is cylindrical in shape and stands about seven inches tall. In contrast, the HomePod mini is ball-like and only just over three inches tall.

Neither HomePod is large, but the HomePod mini is so small that it’s easier to fit in tight spaces around the home. It’s also much lighter, making it easier to move.

The original HomePod weighs 5.5 pounds, whereas the HomePod mini is only 0.76 pounds. It’s as light as a feather in comparison.

Both speakers feature a touchscreen display on the top, which you can use to adjust the volume, activate Siri, play or pause your music, and even skip forward and backward.

The only difference in the display seems to be that the Siri animation on the HomePod mini takes up the entire touchscreen from edge to edge. In contrast, the original HomePod only shows a colorful animation in the middle of the display.

Coming in at a third of the price of the original HomePod, Apple must have found somewhere to make cuts on the HomePod mini. Although Apple has made no mention of this, we believe these cuts came from the speaker itself.

Unfortunately, there are no HomePod mini speakers available to test yet, so we can’t be sure. But it seems likely that the HomePod mini won’t sound as good as the full-size HomePod.

The original HomePod uses a seven-tweeter array with a four-inch woofer for full sound that is distortion-free even at max volume.

The original HomePod also uses six built-in microphones to analyze the size and shape of your room, tuning the speakers to create the best sound for your space. This spatial awareness combined with beam-forming tweeters allows the HomePod to send different aspects of the audio to different areas of the room.

The new HomePod mini offers some of these features, but not all of them.

The HomePod mini still projects audio across 360 degrees, so you can place it anywhere in your room to listen to music. And it still delivers a balanced sound from its full-range driver and force-canceling passive radiators for bass extension.

However, it’s unlikely that the HomePod mini can output the same volume and low-frequencies heard from the HomePod. This is simply due to its smaller and lighter design.

The HomePod mini also lacks the HomePod’s spatial awareness features. Meaning it can’t tune your audio to the room in the same way, directing different aspects of the sound to different areas.

It’s already possible to Handoff music from your iPhone to your HomePod with a simple tap. But using the HomePod mini, you also feel haptic feedback during the Handoff, taking the connection between your devices to another level as your iPhone vibrates with the music.

The HomePod mini also suggests new listening recommendations on your iPhone lock screen whenever it detects that you’re nearby. And you can move your iPhone close to the HomePod to see a popup showing the music that’s currently playing.

It doesn’t look like any of these features are going to be available on the original HomePod due to its lack of a U1 chip.

Is HomePod mini Worth It?

The HomePod mini sacrifices a little and delivers a lot when compared to the full-size HomePod. Although we can’t test it with our own ears yet, Apple claims it delivers an “unexpectedly big sound” for a speaker of its size.

Although the HomePod mini audio quality might not quite live up to the heights of the larger HomePod, it offers identical features in almost every other area.

And it does so at a third of the price.

If you’re an Apple user in the market for a smart speaker, the HomePod mini is a no-brainer.