This was evidenced by the introduction of the dedicated Blood Oxygen (SpO2) sensor that was included. We have seen countless stories of how the Apple Watch detected an abnormality, resulting in someone’s doctor catching an underlying health issue that ultimately saves their life. While not on the same level as something like the Heart Rate monitor, the SpO2 sensor comes close.

With every iteration of the Apple Watch, and just about every other Apple device, there’s a “defining feature”. The iPhone X saw the removal of the Home Button. The Apple Watch Series 3 introduced LTE connectivity. The iPad Pro 2020 introduced LiDAR and the A12Z Bionic.

The trend continues with the Apple Watch Series 6, marking the first wearable from Apple to measure Blood Oxygen (SpO2) levels. This means that if you own a smartwatch older than the Series 6, including the Watch SE, you’ll have to purchase a separate Pulse Oximeter.

How does the Blood Oxygen Sensor work? 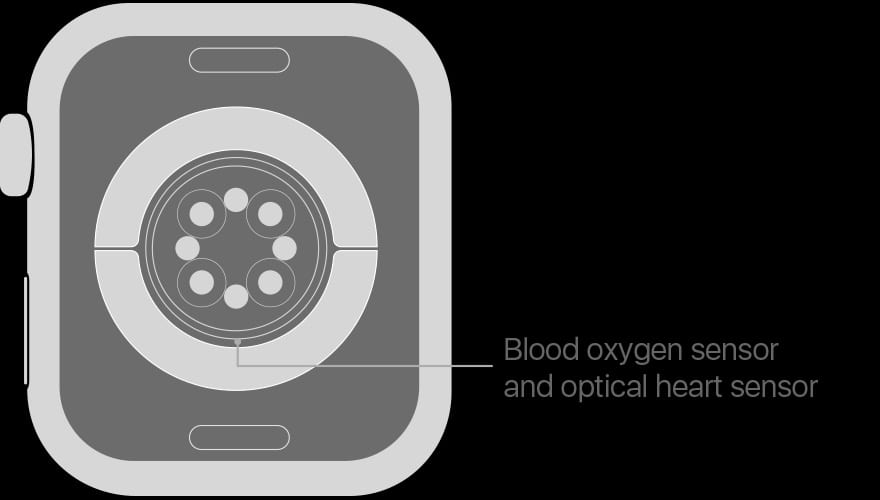 The new SpO2 sensor is built into the back of the Apple Watch, along with the other health sensors which rest on your wrist. When measuring your levels, there are four clusters of red, green and infrared LED lights, which work with four photodiodes to convert light into an electrical current. The lights shine onto the blood vessels in your wrist, with the photodiodes measuring how much light bounces back.

The color of your blood helps to determine how much oxygen is in your blood. Oxygenated blood is bright red, while dark red blood usually indicates that there’s less oxygen. If your blood does not have enough oxygen, it could mean that your lungs are not providing enough. If you’re concerned with the readings from your Apple Watch Series 6, be sure to call your health care professional and ask questions.

How to measure Blood Oxygen levels with Apple Watch

If you’re the proud owner of the Apple Watch Series 6, then you probably want to know how you can check your SpO2 levels. It’s actually pretty easy to get setup, but you’ll need to make sure that the sensor is enabled first.

In order to take your Blood Oxygen measurements, you’ll need to make sure that the feature is enabled first. This is quick and easy, and here is how: 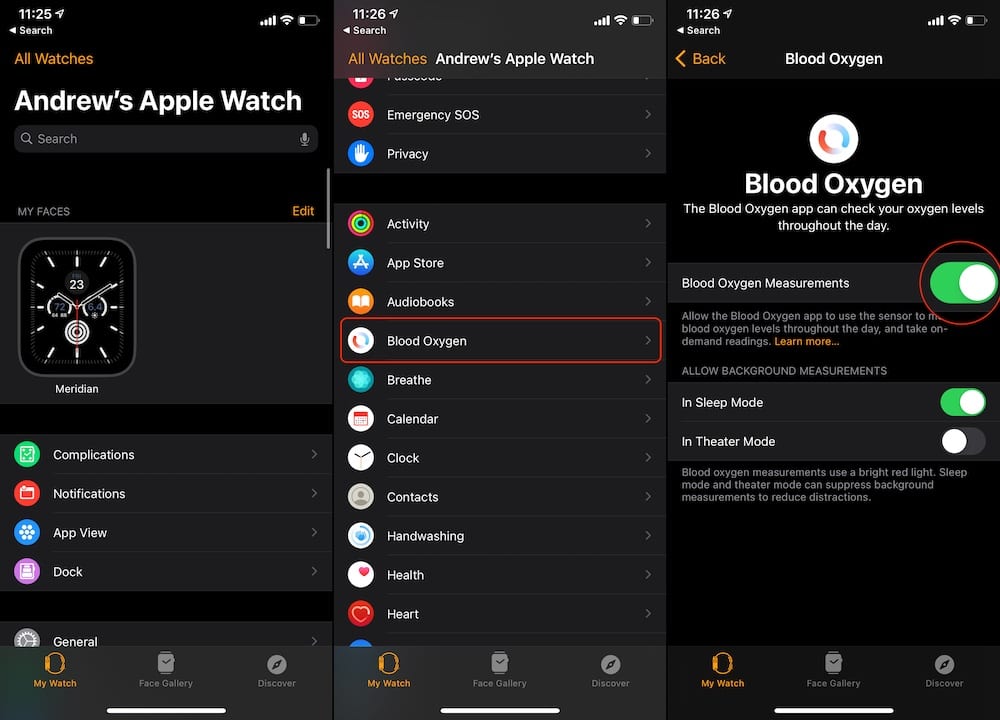 There are a couple of more settings available for checking your SpO2 levels with the Apple Watch. While you can actively choose to check your levels whenever the Apple Watch is also capable of taking readings in the background throughout the day. These are the other two options you may want to enable:

Once you have enabled Blood Oxygen measurements on your iPhone, the fun can begin. Here’s how you can check your Blood Oxygen (SpO2) levels from your Apple Watch Series 6: 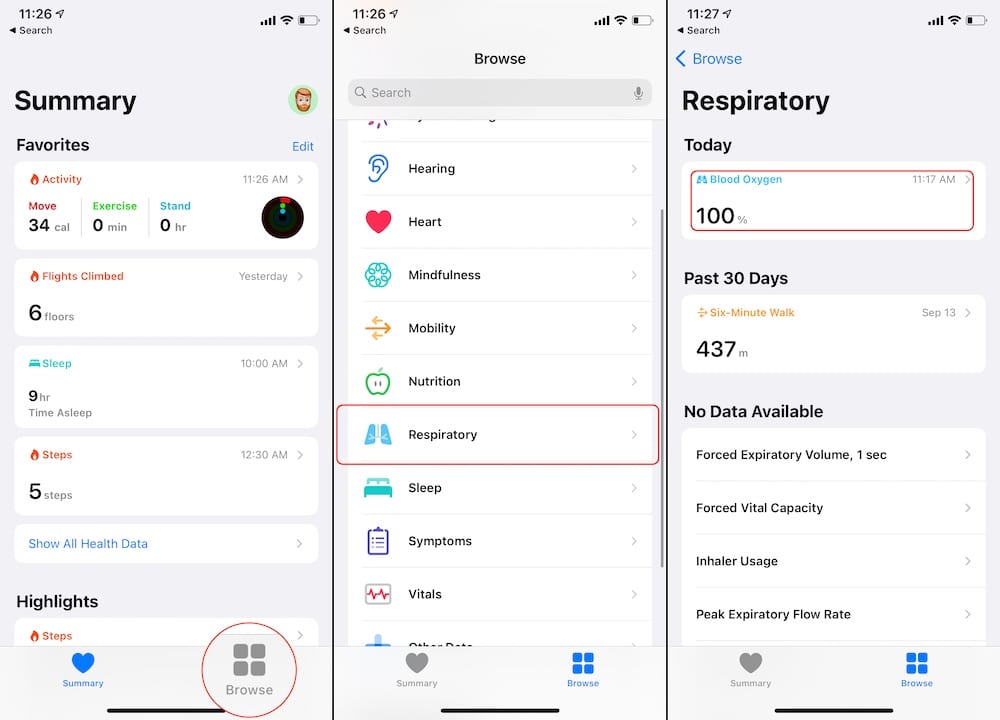 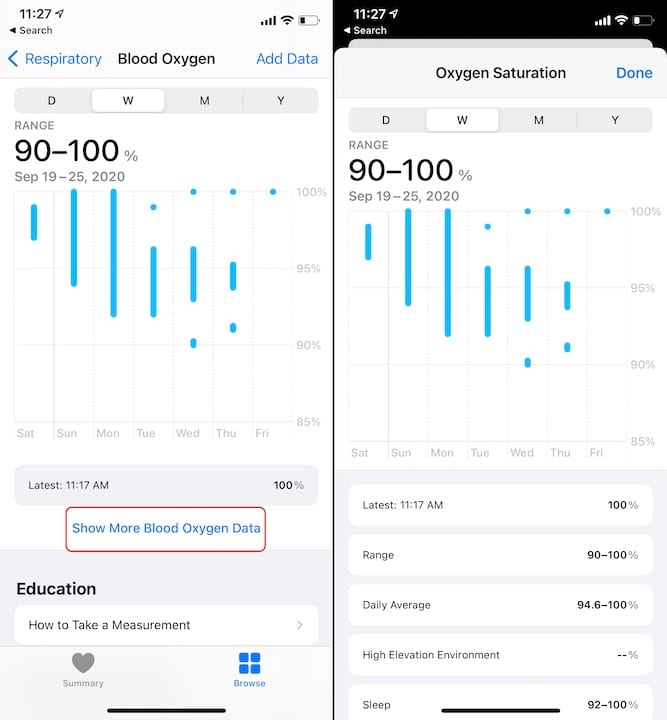 Your results will be shown immediately after the test has finished being administered. You can then tap the Done button to go back to the main screen. For reference, Apple states that “the majority of people have a blood oxygen level of 95 – 99%”. But again, if you have any concerns, reach out to your Health Care professional.

These results will also be recorded in Apple’s Health application, which is pre-installed on all iPhones. Even if you aren’t actively checking your SpO2 levels, there is some testing that’s done in the background when you don’t even know it. All of this is recorded, so you can identify if something is off, while being able to provide the necessary information to your health care professional.