You are here: Home / Reviews / Comparing The Studio Display To Other Leading Mac Displays

Last week, Apple unveiled the Studio Display alongside the new Mac Studio, a powerhouse of a computer in a small package. But we’re not going to be talking about that today.

Instead, we’re going to be focusing on that new screen, the Studio Display. In this post, we’ll be covering how this new monitor from Apple stacks up against the competition along with how to choose between this new display and the other options in this list.

What is the Studio Display?

The Studio Display is Apple’s latest display. It is not a third-party release on Apple’s site – it’s an Apple-brand product. This can be a bit confusing as sometimes Apple launches a display that’s made by someone else, but this isn’t the case here.

This is a 5K display that mirrors the design of the current iMac lineup. In fact, side-by-side and turned off, it would be difficult to tell the silver iMac from the Studio Display. The only real difference (with regards to the enclosure) is that the Studio Display doesn’t have a chin.

The lack of a chin means that you get a few extra inches of screen real estate. The monitor is 27″, has a solid 12MP camera, and has six speakers capable of Spatial Audio. It also comes with a few different mounts, including a standard tilt mount, a sit-and-stand mount, and a wall mount.

Overall this is a really solid display, with the only drawback being the price. It’s $1,599 to start and grabbing any of those alternative mounts (or an upgrade to a matte display) can jack the price up to $2,299.

Comparing the Studio Display to other popular Mac displays

While the Studio Display is a pretty great monitor, it’s also pretty pricey and specific. Also, Apple is still selling a competing monitor. So in this post, we’re going to be looking at the Studio Display vs Pro Display XDR as well as a handful of other monitors.

The first comparison we’re going to be making is the Studio Display vs the Pro Display XDR. The Pro Display XDR is a better display on paper. It’s 6K instead of 5K, has 32″ of real estate, and it can get much brighter when in XDR and HDR mode. 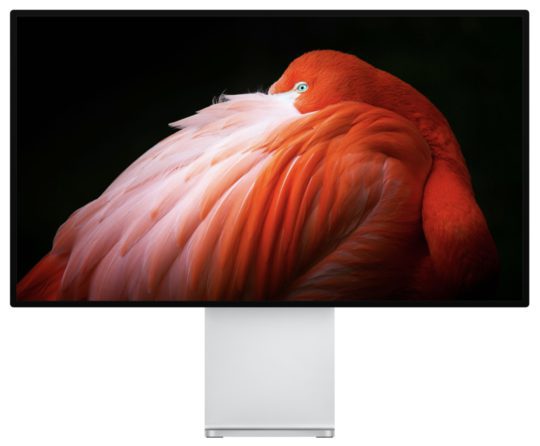 It’s also more expensive. The Pro Display XDR starts at $4,999, which is higher than the Studio Display ends at.

Beyond these differences, these displays don’t have much else to separate them. While I don’t have both to compare side-by-side, on paper they seem to be pretty similar devices.

For that reason, I wouldn’t recommend that someone who is considering these two devices grab the Pro Display XDR. For a device that costs twice as much, it doesn’t seem to have twice as many benefits.

Next is the LG Ultrafine 5K. This display is very comparable to the Pro Display XDR. It has similar port options, a similar display size, and a similar resolution. 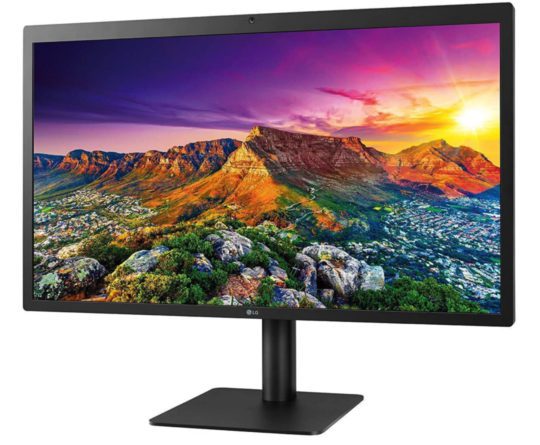 The biggest difference is that the LG Ultrafine 5K isn’t made by Apple. And as it turns out, this is also its biggest strength. The LG Ultrafine 5K is only $1,399 on Amazon at the time of writing, despite having better specs than the Studio Display.

So if you came to this post hoping to find that don’t need to spend $2,000 on a new display for your Mac, you’re in luck! There are plenty of more affordable options as long as you look outside of APple’s offerings.

Another excellent third-party display to consider is the BenQ PD3220U. Despite its terrible name (I don’t know why so many displays sound like they were named after Elon Musk’s kid), this is one of the best alternatives to the Studio Display. 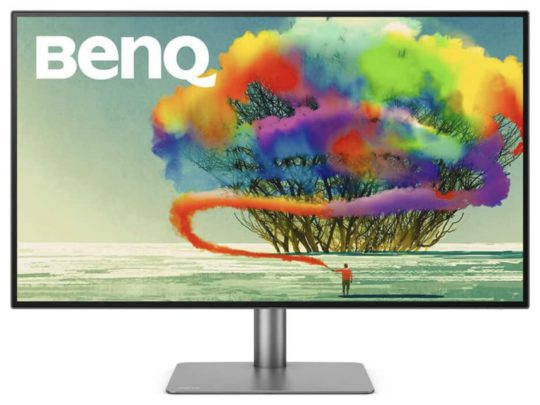 This is a 4K display with a 32″ diagonal. It’s matte, too, so you won’t get as much glare while working. That’s great for a workspace with a window. It has a 60Hz refresh rate, which is the same as the Studio Display also.

And best of all, the BenQ PD3220U only costs $799 on Amazon at the time of writing. That’s a serious price drop for a larger display with a comparable resolution.

Additionally, you’ll notice that most of these displays don’t have as classy of an enclosure as the Studio Display. This is not the case with the BenQ PD3220U, which looks robust and pricey.

Next up is the LG 49WL95C-WE. While this has yet another bizarre name, this display goes to show you just how much more screen you can get when you ditch the Apple logo behind.

The LG 49WL95C-WE is a 5K ultra-wide display. It has a 49″ diagonal, making it absolutely massive. You can have something like four apps side by side while you work with this. I don’t even know why you would need that, but yet, you do you!

And, you guessed it, this display is also more affordable than the Studio Display. It’s around $1,500 on Amazon at the time of writing, which is crazy considering just how big it is. It’s a testament to how much more you can get out of a display than what the Studio Display has to offer.

Another Studio Display alternative to consider is the Dell 2720Q UltraSharp 27” 4K. As is in the name, this is a 27″ 4K display from Dell with a 60Hz refresh rate. This makes it super comparable to the Studio Display in more ways than one. 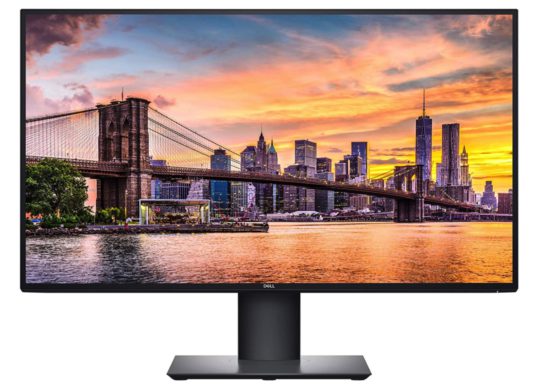 One way that these two displays are not similar, though, is the price. This monitor is just over $700 on Amazon.

Another feature it shares with the Studio Display is that you can raise it to a standing position. Except with this monitor, this is a built-in feature, not a pricey upgrade.

What to look for when buying a Studio Display competitor

Hopefully, you can now see that the Studio Display is flashy, but not much else. Don’t get me wrong, it’s not a bad monitor, but for the price… Well, you can do that math.

If you’re considering a Studio Display alternative, here are a few factors to look for!

The first thing you should consider when picking out a monitor is the resolution. This may sound obvious, but the truth is that not much else matters. The higher the resolution, the more you’re going to enjoy using the monitor.

This is useful as it gives you a single point by which to compare monitors against one another. Remember, these aren’t computers. All they do is show an image, so the better image they show, the better they are.

The other main consideration to look for is ports. Thunderbolt ports are great, as are USB C ports. This is especially true if you’re going to be pairing your display with a Mac, as they all use primarily USB C ports at this point.

Another consideration you’ll bump into is curved vs flat displays. Curved displays were a pretty big fad a few years back, and while the hype has died down, you’ll still see curved displays here and there.

But are they better? In general, not really. A curved display doesn’t necessarily offer anything that a flat display doesn’t. It’s primarily an aesthetic difference. Now, if you like the way curved displays look, definitely go for one! There’s nothing wrong with them. Just don’t expect any mystical benefits from it.

The one unique positive I have heard about curved displays is that they can be a bit more immersive. This only applies if your face is close to the screen, which isn’t recommended at all. But technically, it provides a subtle wraparound effect that may enhance your experience.

Budget is everything, but expect your wallet to take a hit

Of course, a dominating factor when buying a Studio Display alternative is your budget. Don’t break the bank over a display – remember, it’s just a screen. Not the computer. And as a result, you can always replace it with a better display in the future. No rush!

That said, don’t expect to get out of buying a display without spending at least a few hundred dollars. While you would maybe expect to find a decent monitor for $100 or less, you probably won’t. The tech hasn’t come down in price very much over the years.

Consider the space you have available

Lastly, you should consider the space you have available when looking at a new monitor. Although it can be tempting to grab the biggest monitor your budget can afford, this can end up backfiring when your monitor is so big it’s distracting and annoying.

Measure your desk space and look for a monitor that’s no more than half the width of your desk. A third is probably preferable, but if you want the extra screen space, try not to go past half. So if your desk is 100″ wide, don’t buy a monitor that’s more than 50″ wide. That’ll give you 25″ of blank space on either side, which creates a nice balance while you work.

The exception here is if you’re going for a massive display like the LG 49WL95C-WE. If you’re grabbing a 49″ display, you know what you’re getting into.

The Studio Display is a great monitor at the wrong price

And that’s it! Those are the top Studio Display alternatives to consider. In my opinion, the Studio Display is a great product at the wrong price. It’s difficult to justify when looking at the competition. Let me know if you agree in the comments and which display you plan on grabbing!