You are here: Home / iPhone / iPhone/iPad: How to Insert Latin Symbols

You may want to insert / type basic Latin characters or symbols (Unicode Latin Letters with Diacritics) or special characters with accent marks using your device’s screen keyboard. For example, say you visited Turkey and you want to email your friends about the food there and tell them about the excellent “döner kebap” you ate.  Instead of writing “Doner kebap”, you want to write it correctly without installing a third party app. Your device’s keyboard letters e, y, u, i, o, a, s, l, z, c, n. have additional character options. Holding down these letters provides a list of related characters for you to choose from. When these additional character options appear, simply sweep your finger (without lifting your finger) to insert the character of your choice.

Although there are many Latin symbols there are a handful that are commonly used during day-to-day conversations. Here is how you can use them on your iPad or your iPhone.

The first one is “cents”. This symbol for cent,

¢ (from the Latin word centum, meaning “hundred”), also used in many monetary systems other than that of US currency for price tags.

The next common Latin symbol that people tend to use is for the symbol for “degrees”. This is primarily used in reference to temperature.

For some of these common characters, all you need to do is press and hold a particular letter key for a couple of seconds and you will find the choice as shown above.

Using “Cents” symbol on your iPad or iPhone

For example, when you press and hold the ‘$’ key on your iPad keyboard for a few seconds, you will find the symbol for cents along with other common currency symbols. Just drag your finger while pressing to the “cents” symbol and it gets inserted to where ever you are trying on the document.

Using “Degrees” symbol on your iPad

Similarly you can press and hold the ‘0” key on your iPad or iPhone and it reveals the degree symbol that you can quickly use in your communication. 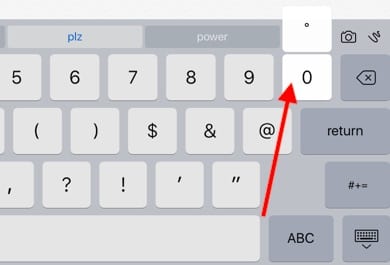 If you are on your MacBook or Mac, easiest way to get a degrees symbol is to use the keyboard shortcut Option+Shift+8

On your iPad, keep pressing on the Shift key (top side pointing arrow) key and press and hold on different letters to reveal the various characters and symbols.

If you use Latin or Greek symbols on an occasional basis, you may want to switch to the Greek keyboard( favorite for typing maths or physics symbols) and then create a keyboard shortcut for these in Settings > General > KeyBoard >Shortcuts so that you don’t have to go back and forth between the regular keyboard and Greek symbols.

How Do you Use Glyphs on your iPad

For users that are looking for a more extended vocabulary such as a complete set of Glyph symbols (including the Apple logo) and other common Greek signs, you can do this by changing your keyboard on your iPad via the Settings App.

Using the Japanese/Kana keyboard can be a hard adjustment. If you use special characters and work with symbols a lot, there is a third party keyboard that is worth exploring. It is Unichar.

The Unichar keyboard appprovides and extensive library of Unicode characters that you can use not only use on your iPad or iPhone but also with your Apple Watch.

There are 18 different categories of character symbols to choose from which include a wide variety of Math and scientific symbols. 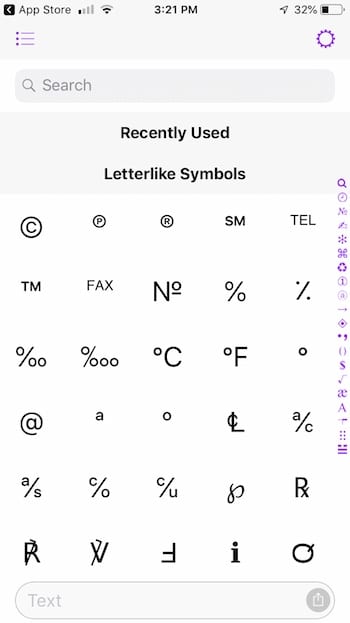 Some of these categories require in-app purchases, but the free version provides hundreds of interesting Unicode characters that you can choose from when typing on your iPad or iPhone.

You can choose from icons for bullet points, technical symbols, pictographs, signs and standard symbols, common fractions, roman numerals and much more.

You can also search for a character by simply drawing it on the search box!

Once you install Unichar, you can use it on your iPad or iPhone by simply switching the keyboards by tapping on the “Globe” icon on your iPad keyboard.

The other keyboard app that is popular with people who use symbols is the symbols app.

A light third party app worth exploring for symbols in keyboard is ‘Characters and Symbols LTE’on the app store.