You are here: Home / How-to / How to Spot and Avoid Fake Apple Accessories

Counterfeit and fake Apple accessories are everywhere. And while they’re cheap and plentiful, they can actually be a huge problem. So just how do you know how to spot and avoid fake Apple Cables and Accessories?

Rather than waste money and time with these counterfeits, learn how to identify Apple Certified Lightning Connector Accessories before you buy!

The World is Full of Fakes!

In 2016, Apple sued a fake accessory retailer called Mobile Star, LLC — and in the text of the lawsuit, Apple revealed that 90 percent of “Apple” power bricks and cables on Amazon were counterfeit. 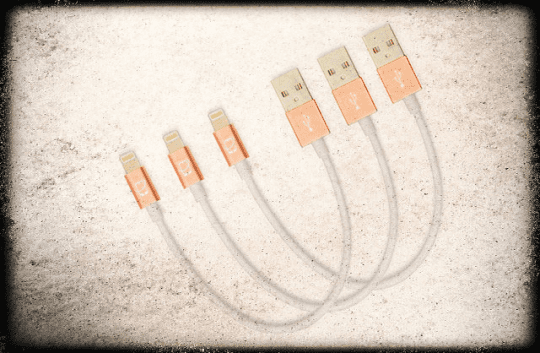 That’s why Apple now recommends using only accessories that Apple certifies and that showcase the “Made for Apple” badge.

But what’s the big deal with these third-party cables and accessories?

You’re not just getting a substandard product when you purchase a knockoff charger; you’re actually buying a possible safety hazard.

In their research for the lawsuit, Apple found that the fake chargers were “poorly constructed, with inferior or missing components, flawed design, and inadequate electrical insulation.”

At best, you’ll get poor performance and an accessory that’s not durable — one that doesn’t stand up to routine use. Many fake chargers won’t allow you to sync your iOS devices to a computer, either.

You can even inadvertently damage your iOS device, sometimes irreparably. And at worst, counterfeits can be physically dangerous. Unlike certified or official accessories, they can potentially catch fire or even electrocute users during their use.

If you use a counterfeit or uncertified Lightning accessory, you may experience these problems

How to Spot Fake Apple Accessories

To avoid the safety hazards to your and your device, it’s recommended that you only buy first-party Apple or certified accessories.

But, unless you’re getting your charger or power brick directly from Apple or an Authorized Reseller — or you’re purchasing an Apple-certified device from another outlet — then you’re prone to get a knockoff instead.

If you’re looking at accessories from third-party retailers, or if you already have an accessory you’re not sure about, here’s everything you need to know to figure out if it’s a fake or not.

MFi (Made for iPhone/iPad/iPod) Program

Your first step should be to expect your accessory’s packaging. Apple’s packaging is pretty distinct, so you shouldn’t have issues there. 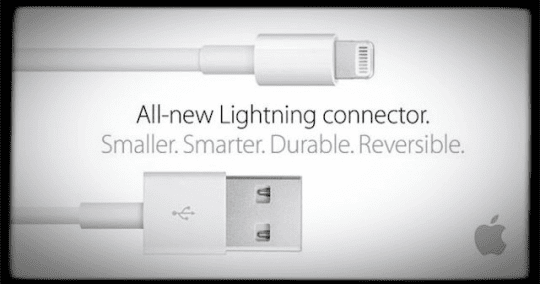 But first-party Apple accessories aren’t your only option. There’s a wide range of “MFi” accessories manufactured by third parties that have been vetted by Apple and are specifically meant to work with its products.

How to Spot Fake Charging Cables for Your Apple Devices

The first clue to a cable’s authenticity is the writing present. Official Apple cables will have “Designed by Apple in California” about seven inches from the USB connector.

Next, to this, first-party cables will have either “Assembled in China,” Assembled in Vietnam,” or “Indústria Brasileira” and a 12-digital serial number. 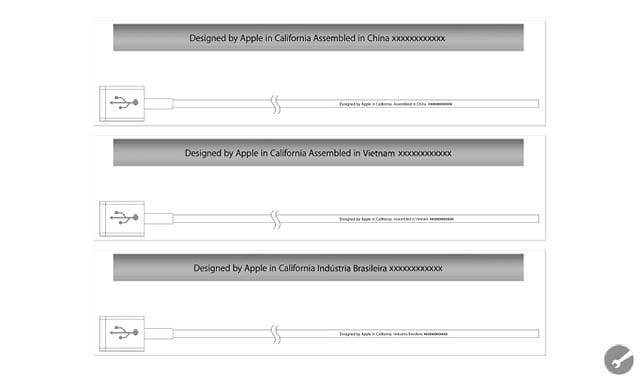 The cable’s components itself are also worth a look. Even if a counterfeit manufacturer has nailed mimicking aspects of authentic cables, the cable’s hardware can be a dead giveaway.

Spotting a fake cable in this way is actually pretty involved, and Apple has an entire support page dedicated to it. But we can boil it down to the following:

How to Spot Fake Power Adapters

Spotting a fake power adapter is a bit harder to do than a cable, and Apple doesn’t have a detailed page on it.

Of course, the first thing to look out for is any differences between an official power brick and the counterfeit brick. These should be pretty apparent.

Build and material quality and construction are also factors. You shouldn’t be able to rip off any casing or remove the power prongs by hand.

Perhaps the most telling difference is the text present on the back of the power adapter. Look for typos — which are incredibly common on cheap knockoffs.

If it doesn’t say that, or if it’s not spelled correctly, then it’s a fake. You should double-check the other text present, too.

How to Spot Other Fake Accessories

Similarly, if you have a Lightning to 30-pin or a Lightning to Micro USB adapter lying around, and you think it might be fake, you can review the following. 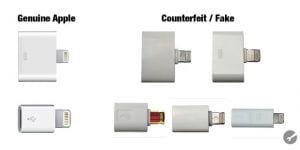