You are here: Home / Mac / The New M1 Mac mini: Is It Powerful Enough?

Like those two MacBooks, this Mac mini is one of the first Apple computers to have an Apple SoC in quite a long time. It’s sporting the new M1 chip, which makes this a major update for a miniature device.

In this post, we’ll cover everything new in the 2020 Mac mini, including the good and the not-so-good.

What is the M1 Mac mini?

It occurred to me while putting this post together that many users might not have heard of the Mac mini before. I’d wager that it’s one of Apple’s least popular devices, and I’m impressed (and happy) that they haven’t axed it yet. 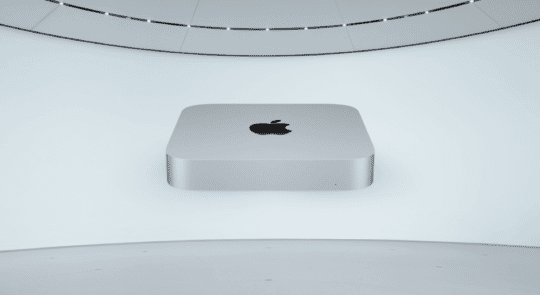 For those who don’t know, the Mac mini is a peripheral-less computer. If you’ve owned desktop Windows computers before, you know that they generally come with a “tower” that connects to a monitor and keyboard. Macs, on the other hand, are usually all-in-one – there isn’t a separate tower.

That’s where the Mac mini differs. When you get the Mac mini in the mail, you’ll find that it comes with no keyboard, mouse, or screen. You have to supply those things yourself. This gives you a bit more flexibility and portability, as well as presents serious cost-savings.

The M1 Mac mini is just the latest update in the Mac mini ancestry, featuring the impressive and new M1 chip (you can read more about this chip here). 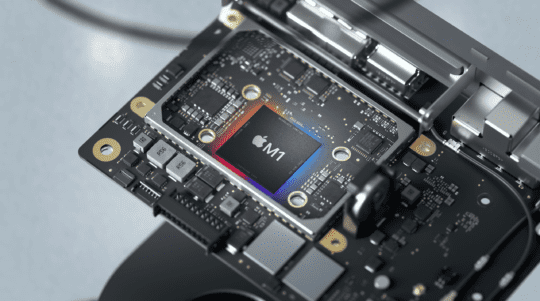 It’s impossible to talk about the new M1 Mac mini without talking about the M1 chip. The M1 chip is Apple’s first System on a Chip after splitting with Intel earlier this year. This makes the Mac mini an important step in Apple’s plans, as well as a much more powerful device than before.

The M1 chip is packed with 16 billion transistors, an 8-core CPU and GPU, and a more integrated memory system. All of this results in a faster, more powerful, and more energy-efficient device.

I’ll argue that the most shocking part of the M1 Mac mini announcement was Apple dropping its price by $100. Apple is infamous for raising its prices, so this was a welcome surprise.

The Mac mini now starts at $699, making it the cheapest Mac by $300. That’s a pretty significant price difference, and it’s one of the reasons this is such a great entry-level product for new Mac users.

As always, though, the starting price is hardly half the story. Apple is still charging hundreds of dollars for storage and RAM upgrades, so you can easily get the price up to $1,500 or more. Our recommendation would be to upgrade the RAM to 16GB if possible and keep the storage as low as you can get away with.

The storage and RAM

Speaking of storage and RAM, let’s talk about these features! The storage on the Mac mini is largely unchanged – it starts at 256GB and can be upgraded up to 2TB. The pricing is atrocious as always, but Apple has always had disappointing storage upgrade options, so what can you expect?

The RAM, on the other hand, is much different than previous generations of the Mac mini. The mini has always been one of the few upgradeable Apple computers. That means you had the option to buy a Mac mini with the cheapest specs and then to upgrade it with third-party parts if you wanted.

Now that the RAM is built into the M1 chip, however, this is no longer going to be possible. So if you want better RAM, you have to pay for it at checkout. That means you’re stuck with Apple’s overpriced RAM.

Additionally, Apple chose to cap this RAM at 16GB. In the previous generation (which you can still purchase with an Intel processor) it was possible to upgrade your RAM to 64GB.

To be clear, 95% of users don’t need more than 16GB of RAM, so don’t let this sway your decision too much. Just be aware that you can’t upgrade it after purchasing.

On a brighter note, the new Mac mini has a faster GPU, CPU, and neural engine. That’s because all of these things are now built into the M1 chip, and by extension, have all gotten a pretty decent upgrade.

The GPU will likely be the most noticeable improvement for most users. It’s gotten a 6x performance boost, which will help with gaming, 3D rendering, and more. The CPU has gotten a 3x boost, which will make the device feel smoother all around and lengthen its lifespan.

On paper, the neural engine has gotten the biggest leap in performance. Machine learning is now 15x faster on the Mac mini than in the previous generation. That’s an impressive number. However, most users probably won’t notice this improvement, as ML has a long way to go on Mac. Still, it’s a welcome upgrade.

Lastly, the new Mac mini is far more energy-efficient. It stays cooler, runs quieter, and consumes less power. If you already own a Mac mini, you’ll probably notice that you pay less attention to your mini while using it. This is more of a quality of life change than anything else, but it’s another welcome upgrade.

Can you upgrade the M1 Mac mini’s RAM?

Yes – technically. When you purchase it. If you’ve owned a Mac mini in the past, that’s not the most reassuring answer.

It used to be that the Mac mini was a device for those who wanted the Mac environment but the plug-and-play features of Windows. This meant you could buy a Mac mini with base specs and then purchase your own RAM, storage, and more separately.

Now that everything is combined into the M1 chip, this isn’t so easy to do. You don’t have any upgradeable options when it comes to the CPU or GPU, and the RAM and storage can only be upgraded when you purchase your Mac mini. After it arrives in the mail and you plug it in, you’re stuck with whatever RAM you decided to go with.

What ports does the M1 Mac mini come with?

One of the reasons users choose the Mac mini over something like a MacBook Pro is the ports. Mac mini comes with not only more ports, but more types of ports, which makes it more compatible with your devices new and old.

The M1 Mac mini comes with an ethernet port (for connecting to the internet), two Thunderbolt ports (USB C ports, but faster), one HDMI port (for your monitor/TV), two USB A ports (the old-fashioned USB port that we’re all used to), a power outlet port (for plugging it into the wall), and a headphone jack (it’s still there!).

In total, that’s eight ports. It’s missing an SD card slot and a disk drive, so if you find yourself needing either of these, you’ll need to grab some adapters when you buy the new Mac mini. 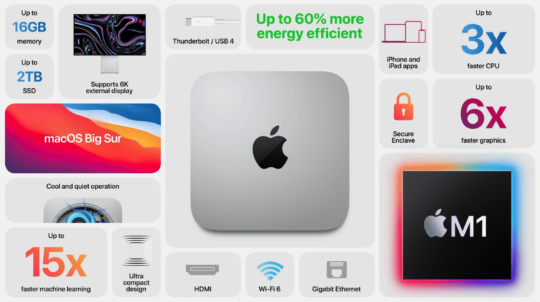 Sadly, despite how much has improved on this new device (more power, less money), there are still some downsides. Namely, Apple has downgraded a few components and features from the previous generation of Mac mini.

We’ve already touched on the first point – non-upgradeable components. After you buy your Mac mini, that’s it, you’re locked in with whatever you chose. And it doesn’t look like this is going to change. Now that everything has been condensed into the M1 chip, upgrading after purchasing isn’t possible, unless Apple switches to a modular design in the future (but this seems highly unlikely).

Second, those who have purchased a Mac mini in the past will have noticed that this Mac mini comes with fewer ports than the one from last year. Instead of four USB C ports, this Mac mini only comes with two. And instead of an upgradeable ethernet port (for faster internet speeds) you only have one choice: The slower choice.

That said, there is still a slice of users in the middle for whom the M1 Mac mini is an ideal machine. Do you want to pick your own screen and keyboard? Do you prefer the form factor of the Mac mini? Is portability not a concern for you? And are you looking to upgrade without breaking the bank?

Depending on how many of these questions you answered yes to, you might consider picking this device up. I’m a big fan of the Mac mini, and while I did hope this device would have a bit more scalability (i.e., more optional upgrades), I think this is still a solid purchase for the casual Apple buyer.