Halloween just happened, and for the first time since the pandemic started, I went to a fully-fledged party. And boy, was it nice. It was a nice grouping of friends, family, and alcohol. I don’t know about you, but whenever those three mix in my circles, it means that people are about to start breaking out in song. That’s where the fourth element comes in: The best karaoke apps for Apple TV.

Karaoke is such a fun and lighthearted tradition, it’s hard not to love it. Whether you’re a performer or a giggly observer, karaoke gives you a window into a more vulnerable and playful side of your loved ones.

And with modern technology, karaoke is easier than ever before! All you need is a subscription to a music streaming service and you’re ready to go.

Of course, sometimes you want to kick things up a notch. Maybe you want a mic, the lyrics on screen, the music with quieter or removed vocals, etc. For that, you’ll want to use a karaoke app. And when you have a group of friends and family over, playing a karaoke app on your Apple TV is nearly perfect.

In researching for karaoke apps to include in this article, I was surprised to find how few there actually are. I assume this is because of licensing issues. Hopefully, Apple will find a way to interface karaoke apps with Apple Music. This way, you can still pay to play the music with Apple Music while interfacing with the music using a karaoke app.

Until then, it looks like options are a bit limited! Still, I think there’s a lot to love about the apps listed below. I’ve also included alternatives in case you don’t like the suggested apps and I’ve covered an alternative music game that I’ve had a lot of fun playing with loved ones. 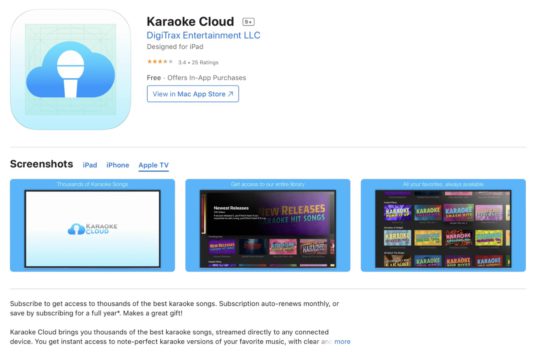 Karaoke Cloud works by licensing songs for karaoke play. They then create an instrumental version and sync up the lyrics. That way, your vocals aren’t obstructed by the original singer’s voice.

The one downside to this is that because the songs are licensed, you do need to subscribe to Karaoke Cloud. That’s $10/month, which I think is a fair price. If you’re not going to be using Karaoke Cloud regularly, though, then you’ll of course not be getting your money’s worth.

Fortunately, this app offers a free trial! So if you just want to sing a few songs for tonight, you can quickly set up the free trial, enjoy your night, and then cancel it in the morning.

Also, I’m not sure if this is clear yet, but: This will not magnify your voice! Karaoke Cloud (and for that matter, none of the apps mentioned in this list) doesn’t have a microphone feature. That’s because Apple TV does have a handheld microphone. So your party will just be hearing your normal singing voice – not your mic’d singing voice.

You can compensate for this by purchasing a handheld microphone online for around $30+. One of my roommates had a microphone like this and loved it.

Alternatively, you can just pass a hairbrush or spatula around. That may sound like a joke, but uh… try it!

Next up on our list of the best karaoke apps is Smule. Smule is similar to Karaoke Cloud in that it features licensed karaoke versions of popular songs. It has a super extensive library, with more than 10 million songs. So the odds that you’ll have even a semi-popular song not show up in the app is pretty unlikely. 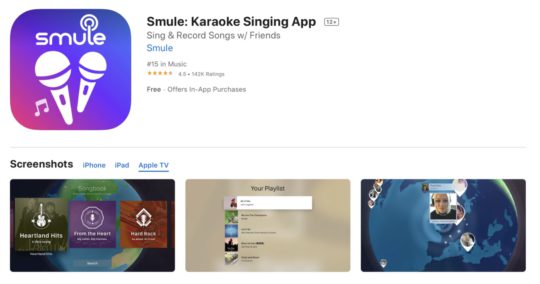 The Apple TV version of Smule is a great way to have fun playing karaoke with your friends. Again, it’s just an app, so it doesn’t come with a microphone or anything like that. You’ll just be getting lyrics and background music to support you while you sing. Grab your hairbrush once more!

There is an iPhone version of Smule, however, which uses your iPhone’s built-in mic. While this can make it a little more difficult to have fun with friends, it’s great for the karaoke fan that prefers singing alone. Since this version does use your iPhone’s mic, you can also apply filters to your voice with Smule. This can add another layer of fun and even help you practice your singing.

From what I can tell, Smule is free up to a certain number of songs. After that, you’ll need to buy a pass to keep singing more songs. The passes are relatively cheap, however, ranging from $2.99 to $9.99 in price. Not a bad price considering the number of songs you have access to!

3. Misuero Karaoke Latino: One of the best karaoke apps for Latin music 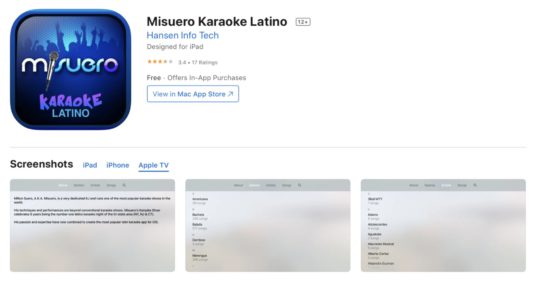 Admittedly, the selection of music isn’t as impressive as some of the other options in this list. You’ll only have access to a few thousand songs rather than a few million. You do get access to 200 for free, though, which is plenty for a one-time party.

To get access to Misuero Karaoke Latino’s entire catalog of music, you only need to pay $0.99/month or $9.99/year. I think that may be the best deal of any karaoke app on this list. It certainly makes up for the slightly limited library of songs, at least in my opinion.

Overall, I think this is a solid app if you’re a Spanish speaker or just someone who enjoys listening to Latin music. 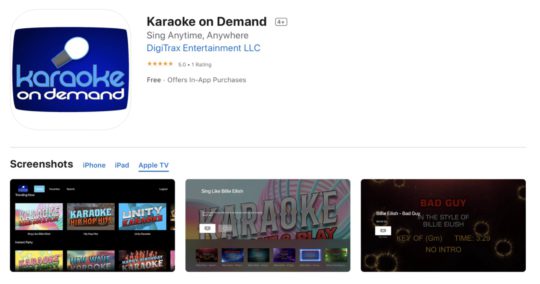 The subscription is also a little high considering the limited selection of music. It’s $9.99/month, which is as much as a personal subscription to Apple Music. For the occasional karaoke party, it might not be worth it unless everyone is pitching in for the fun.

That said, Karaoke on Demand still provides a quality karaoke experience. Give it a look if you haven’t been able to find your favorite songs on any of the other apps in this list of the best karaoke apps.

Unfortunately and surprisingly, it doesn’t look like there are that many more karaoke apps for Apple TV. I would guess that this is due to licensing issues more than anything else, considering how popular and fun karaoke is. Regardless, we’re going to be covering alternative solutions to the best karaoke apps on Apple TV, starting with YouTube.

YouTube is truly one of the best karaoke apps for Apple TV. There are millions (if not billions) of karaoke videos uploaded for songs of all backgrounds and genres. It’s hard not to find a song you want to listen to. And best of all, using YouTube for karaoke is totally free.

First, there’s no quality control on YouTube. You’re just as likely to find a great karaoke video as you are to find a terrible one. This problem is made even worse by the fact that most of the videos you come across won’t be officially licensed. So the video will either be an odd edit of a song you know or a recreation that might not sound like the original song. There could be typos, too, and so on.

Secondly, you’ll be subjected to ads. Most of us are used to this by now, and it is an important way for creators to make money. Still, get used to watching ads at your party as you work through your karaoke playlist.

In my experience, these two drawbacks aren’t that big of a deal, especially if everyone is focused on having fun. If you’re hosting a karaoke competition, though, then these drawbacks might be too frustrating to push through.

Another alternative to the best karaoke apps is AirPlay. For those that don’t know, AirPlay is a built-in feature for (nearly) every Apple device. It allows you to cast content from one device to another. If you’re watching a video on your iPhone, you can tap the Share button, then choose AirPlay, then choose your Apple TV to start watching that video on your Apple TV instantly.

You can use this feature to play music from Apple Music on your Apple TV, cast YouTube videos or self-created karaoke videos, apps, and so on.

It’s not a perfect solution, since you’ll still need to find or create karaoke on your iPhone. Since there are so many more apps for iPhone than there are for Apple TV, however, you might end up finding it easier to AirPlay content to your Apple TV than to play it natively on your TV.

7. Use a plug-and-play karaoke machine for Apple TV

Last but not least is my personal favorite alternative to the best karaoke apps for Apple TV. That’s a plug-and-play karaoke machine. 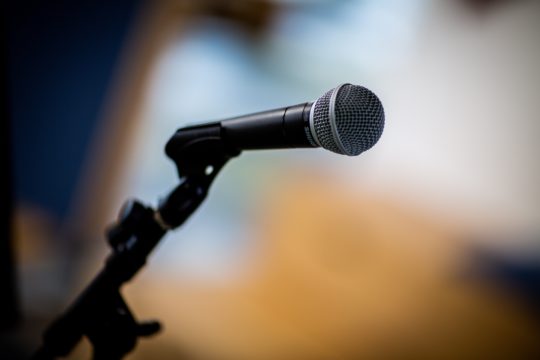 Plug-and-play karaoke machines are exactly as they sound. It’s a device that you can hook up to your TV and instantly start playing karaoke.

The majority of these are going to be microphones that project your voice through your TV speakers. You’ll still need a way to play your music since it’s unlikely that the songs you want to sing will be pre-programmed into these devices.

Still, this is a really fun way to play karaoke at home. It makes it feel far more authentic. I recommend grabbing one of these as a complement to karaoke videos or apps that you happen to like.

Another fun music game for everyone: SongPop Party

Before closing out this article on the best karaoke apps for Apple TV, I did want to include an honorable mention. That mention is SongPop Party.

SongPop Party is an Apple Arcade game that quizzes players on their music knowledge. You can choose from various genres and eras of music, and then the game will quiz you on music in that category. It’ll play samples of music and have you guess who sings the song, what the title of the song is, and more.

This game is a lot of fun! I’m not one for singing during karaoke (I usually just watch and cheer). So SongPop Party is far more in my comfort zone. You do have to unlock more categories and eras, but that’s just even more reason to keep playing this game.

It’s only $5/month for an Apple Arcade membership, so I recommend you give it a shot. My partner and I have had a lot of fun playing this with each other. And it’s so easy to bring more players on board that it’s a no-brainer.

Do you have any more suggestions for the best karaoke apps on Apple TV?

And that’s it! Those are the best karaoke apps (and games) available on Apple TV. Sadly, there isn’t more support for karaoke on Apple TV right now, but these games, apps, and devices should allow you to have plenty of music fun with your friends.