For many years, my favorite Apple device hasn’t been the iPhone, the Mac, or even AirPods. It’s been the iPad. Something happened in the last four or five years when Apple decided to start taking the iPad more seriously. There are now several iPad models to choose from, leading us to the question, which iPad in 2022 should you buy?

As someone who’s owned several different models of iPads and is currently sitting on a 2020 iPad Air, I’ve had a lot of experience with this machine. And in this post, we’re going to be taking a close look at the ins and outs of the iPad lineup. By the end, you should know exactly which model is right for you.

So without further ado, let’s get into it!

First, let’s look at the three ways that you can use an iPad. While you can of course use your iPad in all three of these ways at any time you like, you’ll most likely be using your device for one purpose most of the time. This will have an impact on the iPad you end up choosing, so think about which one of the below reasons is your motivation for looking at an iPad.

As a computer replacement

The first way to use an iPad is as a computer replacement. This is probably the least popular reason to buy an iPad, though for many users it’s probably the right one.

An iPad can do all of the basic things that your computer can do, and it can do most of them better. Browsing the internet, checking social media, playing games, finding new apps, keeping up with email, FaceTiming people, browsing Google – you can do all of this and much more with an iPad. Every year, the iPad updates make it a little more computer-like.

Now, it’s worth noting that an iPad is not a one-to-one computer replacement. I initially thought I would end up using my iPad as a computer, but after two years, I much prefer my Mac.

For a lot of users, though, an iPad can do everything they want to do on a computer. And it can do it for a fraction of the price in a form factor that’s a ton of fun.

Although any iPad model can technically act as a computer replacement, I’d recommend the iPad Air or Pro options. And I’d ultimately skip the iPad mini.

As a media device

The second way to use an iPad is probably the most popular, and that’s as a media device. This is how I find myself using my iPad 99% of the time. Reading books and comics, watching movies, shows, and YouTube, and playing games – the iPad is excellent at all of these things.

If you’re thinking that you can do all of this on an iPhone, you’d be right! You can certainly do these things on an iPhone. But it’s nice to have an iPad for them instead. When I want to watch a movie in bed or bring a book to the park, I don’t want to swipe through the tiny screen of my iPhone. It’s just too small.

Another shortcoming of using an iPhone for this is that it doubles as a communications device. The iPad technically does, too, but not in the same way. The iPhone feels like it’s for calling, texting, and emailing. Stuffing it with entertainment and communications apps can leave it feeling cluttered and bloated. With an iPad, you can better organize your apps and the way you use your devices.

Since you don’t need a lot of performance to use an iPad as a media device, you can grab the basic iPad or the iPad Air. The iPad mini works, too, but it’s only slightly bigger than an iPhone.

As an art tablet

Lastly, when deciding which iPad in 2022 to buy, you should consider if you’re going to use it as an art tablet. Thanks to updates in the iPad lineup, every new iPad currently supports at least one version of the Apple Pencil, so they can all make for excellent drawing tablets.

That said, the larger iPad Air and Pro models are definitely the way to go. And if you’re a professional, you should seriously consider grabbing the Pro if you have the budget. While expensive, it’s got plenty of surface area to make it a solid computer replacement for graphic designers and digital illustrators.

Alright, now that you have an idea of how you want to use an iPad (and which iPad in 2022 you should consider for that job) here’s a more thorough breakdown of each iPad that’s currently available.

It’s important to note that the iPad lineup does receive regular updates, about once per year for most devices. Even still, I’ve had iPad models that lasted for several years before showing their age. The biggest challenge I’ve run into is running out of storage. So as long as you get plenty of storage you shouldn’t have to worry about buying an “old” iPad or one that’s about to be replaced with an upgrade.

The basic iPad model is also the most affordable. It’s $329 and hasn’t changed its price in several years now. The design hasn’t changed, either. It’s the classic iPad with a Home Button that we’re all familiar with.

This iPad comes with the A13 Bionic chip, making it the least powerful of the iPad lineup. It also has the worst camera on the back, with just 8MP. Even the front-facing camera is better at 12MP. 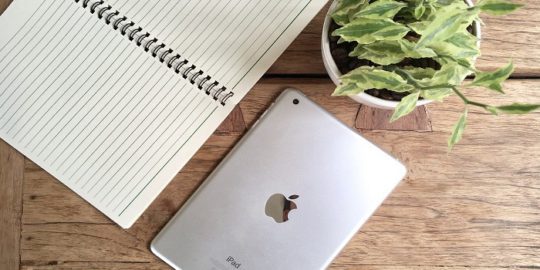 You’ll also get a Lightning connector instead of USB C, making it compatible with the first-generation Apple Pencil. It only has 4G instead of 5G (if you upgrade from the WiFi-only base model) and it has the fewest quality accessories when compared to the other iPad models.

Overall, this is the weakest iPad Apple makes, but that doesn’t mean it’s a bad buy. If anything, this is a steal for the price. The performance is still excellent for playing games, watching shows, and doing basic computing.

So if you’re deciding which iPad in 2022 to grab, consider this one if:

Don’t buy this iPad if you need a lot of power from your iPad. I would not recommend this to professionals or students as a computer replacement.

Next is the iPad mini. This is a weird one, as a lot of you probably already know. It’s a bit smaller than the iPad but a bit bigger than an iPhone, putting it in a weird in-between place. 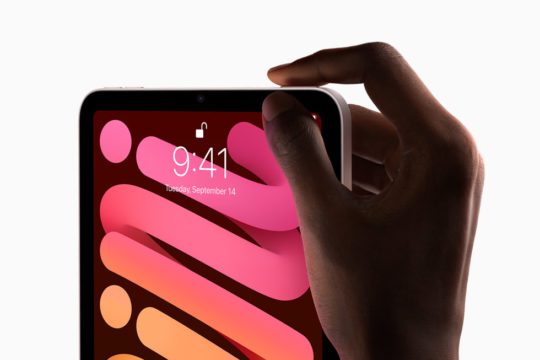 As a result, I find the iPad mini’s purpose to be a bit vague. It’s more expensive and more powerful than the iPad, with an updated design and support for the Apple Pencil 2. Spec-wise, it’s the better device.

But it’s more expensive, too, at $499. It only has an 8.3″ display, making it nearly pocket-sized. Which is neat, but also a bit defeating for an iPad. After all, what’s the point of an expensive, tiny computer replacement, media device, or art tablet? Anything that you would use the iPad mini for, I feel that the standard iPad can do better.

That said, there’s clearly a market for people who want the iPad mini. And if that’s you, then you probably already know it. Maybe it’s the portability, the “cute” factor this device has, and so on. Whatever the case, I only recommend this to people who are sure it’s what they want. For everyone else, I think an iPad or an iPhone is the better option!

That brings us to the iPad Air. The iPad Air is, in my opinion, the perfect iPad. If you’re not sure which iPad in 2022 to grab, I highly suggest this one. 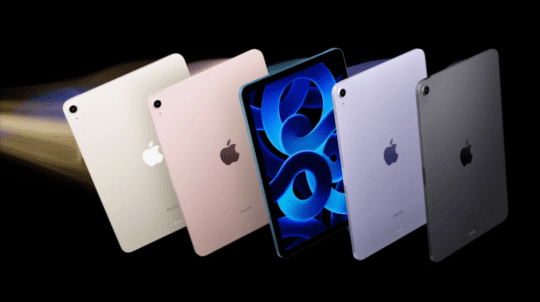 For starters, the iPad Air is reasonably priced, at $599, and comes with some extra features over the basic iPad that make it a better option. It has an updated design, supports the Apple Pencil 2, comes with Touch ID, has an excellent screen, and now supports the M1 chip. That makes it one of the most powerful iPad options.

It has a bigger display than the iPad, too, at 10.9″, without being much bigger than that iPad. It has USB C and since it’s the same size as the iPad Pro 11″, it works with most of the same accessories.

Essentially, you get the perks of the iPad Pro without totally breaking the bank. This makes it a super solid option in the iPad lineup. This is the one I’d recommend to students and most professionals. I would not necessarily recommend it for kids and casual users, as the high price may make it unwieldy. You can read all about this iPad in my review here.

It used to be that the iPad Pro was substantially more powerful than any other iPad. However, both iPad Pro models currently use the M1 chip, which is the same as the iPad Air. So I don’t believe there’s a significant performance difference between them right now. That may make grabbing the 11″ iPad Pro a bad decision, at least until it’s back to being more powerful than the iPad Air. 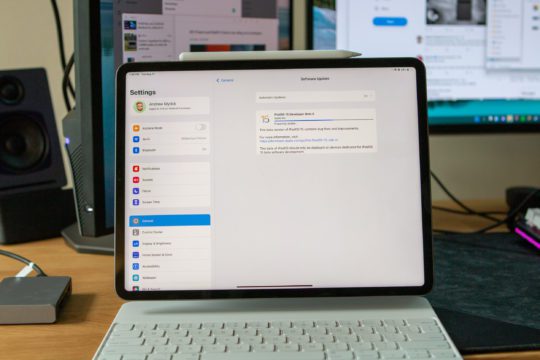 The iPad Pro 12.9″, on the other hand, is the true computer replacement for pros. The large size can be a bit unwieldy in the hands, but it means that with a keyboard, this is virtually a laptop.

It’s also priced like one, which may be a turn-off for some users. You can grab a MacBook Air for around the same price, which might make choosing between the two a serious debate. Personally, I would grab the MacBook Air. But I’m also a writer who likes to program in his spare time, so the iPad Pro doesn’t have a lot to offer me.

For artists and students, however, the larger iPad Pro might be a serious consideration. The large size and Apple Pencil will allow you to take notes and draw with ease, and the flexibility and portability will make it a fun and modern device. Before making this commitment, however, I’d recommend grabbing the iPad Air and seeing if using an iPad as a computer replacement is right for you.

And that’s it! That’s everything you need to know to decide on an iPad model that’s right for your needs. Hopefully, you can now pick one knowing that it’s the right one for you. As a recap, I’d recommend the iPad to everyone, the iPad mini to almost no one, the iPad Air to people who want something more serious, and the iPad Pro to the true pros with a bigger budget and no need for a MacBook.