In this post, we’re going to cover everything you need to know about this new device, including when it will be available, what new features it comes with, and whether or not it’s worth upgrading.

What is the Apple Watch Series 7?

For those that don’t know, the Apple Watch is a smartwatch that connects to your iPhone. It’s packed with fitness-tracking features like heart rate monitoring and calorie tracking.

Each year, this device gets an upgrade, making it faster, more durable, and sleeker.

The 2021 watch doesn’t have a definite release date or price yet, sadly. Apple will be releasing this info later in the Fall, so you should still be able to get it before the winter holidays.

Still, it’s a bit of a bummer not to know these things! I would guess we can expect this Apple Watch to launch in October at the same price point as the Series 6. That means a $399 starting price and $429 for the larger size.

Everything new in the Apple Watch Series 7

Alright! With the basics out of the way, we’re ready to dive into more detail. Below is everything that was (and wasn’t) announced at the debut of the Apple Watch Series 7.

By far the biggest change to this version of the Apple Watch is the display. Apple has once again expanded the display size of the watch without making the device any bigger.

This was accomplished by shrinking the bezels of the device right up to where the glass display meets the metal body of the watch. It gives the Apple Watch Series 7 a wraparound look, which Apple has taken advantage of with some UI updates (more on that later). 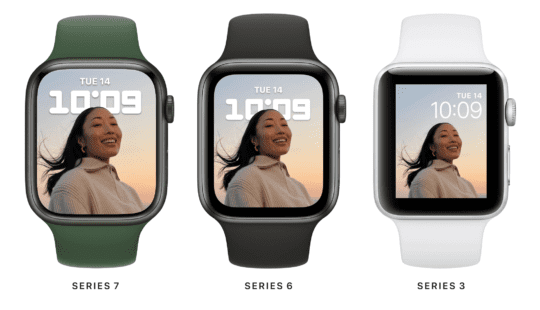 Admittedly, I’m not sure how important this screen expansion will be to most users. It’s similar to how Apple’s devices kept getting thinner, past the point where anyone cared anymore.

I can hardly tell that my Apple Watch SE’s display isn’t wrapping around. I’m not saying that the new display isn’t an improvement, just that it’s pretty minor.

The new display is a lot more durable, too. Apple unveiled this device by showing it being slammed into the dirt, and it was a fun moment.

Specifically, this new device has a 50% thicker crystal screen and an IP6X rating. IP6X is one of the highest dust ratings there is. To get it, the new watch was placed into a vacuum chamber and had dust vacuum-forced through it.

This certification means that no dust made it through the surface of the device. So Apple isn’t overselling it – the new watch is going to be pretty indestructible.

As mentioned, Apple put some unique UI features into the new Apple Watch that take advantage of the new wraparound display.

On this new watch only, you’ll see more text on the screen at once, larger buttons, and unique watch faces. 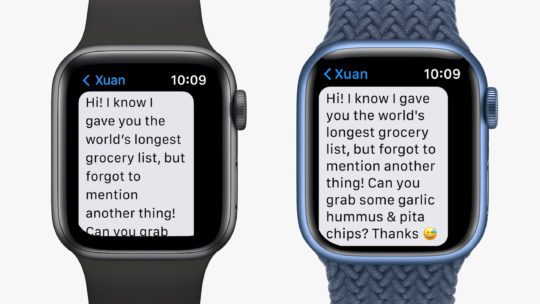 You won’t see any of these features on other Apple Watch editions, so if that’s a big selling point to you, that’s something to keep in mind.

That said, I think this falls into the “Oh, neat!” category. It doesn’t change the functionality or capabilities of the device whatsoever. It’s just nice!

If you had been following Apple Watch Series 7 rumors that were building up before this product launch, then you might be disappointed to know that this new screen is the extent of the “redesign” this device got.

For those out of the loop, a lot of people were expecting and claiming that the Series 7 would have a flat design reminiscent of the iPhone 12/13 and iPad Pro lineup. You can see renderings of it here.

I have mixed feelings about this! While the flat design does look pretty slick, I don’t think it would be comfortable to wear. It doesn’t look as durable as the current rounded look, either. Matching its design to other Apple devices would be cool, but maybe not a great idea.

Of course, those leaks could still be half-right. Maybe these leaks and rumors were for the Series 8, presumably to be announced in 2022. I guess we’ll have to see!

The good news is that you can use your existing Series 6 and SE accessories with this new Apple Watch. That includes bands, cases, and screen protectors.

Calorie counting while riding a bike is getting better

Finally, the bike tracking on Apple Watch Series 7 is going to see an improvement. The Apple Watch could track bicycle workouts for years, so that’s nothing new.

However, those workouts have been pretty lackluster. I’ve personally had experience with inaccurate tracking on biking workouts. The calorie count and exercise minutes don’t react in ways that make sense, and the Workout app hasn’t accurately detected when you’re starting a workout.

According to Apple, all of that is set to change with this new watch and watchOS 8.

With this update, the Apple Watch will be able to more accurately track your performance while biking. It’ll also automatically detect when you start a bike ride so that you don’t have to remember to start one manually.

Also, Apple has added fall detection for biking! Fall detection is an optional feature that you can turn on when using the Apple Watch, which is useful for those who are at risk of falling.

Now, though, you can leave that feature off for general Apple Watch use and have it turn on whenever you’re on a bike. It’s an extra level of safety that is greatly appreciated.

Fast-charging (but only with the right adapter)

Another welcome feature coming to the Apple Watch Series 7 is fast charging. Fast-charging has been available on the iPhone for a few generations now, and for those who use it, it’s a great convenience.

I was surprised to see this feature announced for the Apple Watch considering how small the battery in this device must be. But it’s here, so apparently, Apple has figured it out!

With fast charging, you’ll be able to charge your Apple Watch 33% faster. It should only take you 45 minutes to reach a charge of 80% if you start at 0%.

You can also get 8 hours of battery life after just 8 minutes of charging. I have a feeling that this is only going to be the case while your watch is still new, but that’s still pretty useful!

5 new color options and more bands to choose from

For the first time in a while, the Apple Watch has new color options! Apple has nearly always kept it limited to Space Gray, Silver, and Gold, with Blue and Product(RED) options being added to the lineup last year.

This new edition has even more options! You can choose from: 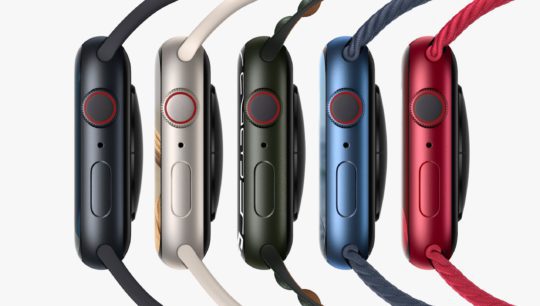 These colors are all pretty muted, which regular AppleToolBox readers will know I typically don’t like.

When it comes to the Apple Watch, though, I don’t mind! The personality you give your watch comes from the bands and watch faces you choose. The metal band on the device itself is pretty small, so keeping it neutral helps your band and watch face pop.

Speaking of bands, now there are more! As is standard, Apple has partnered with Nike and Hermès to create specialty watch bands.

For Hermès, there are four new bands. As usual, these are stylish leather options at a high price. If you’re the kind of person who buys Hermès Apple Watch bands, you’ll like additions.

And, of course, you get exclusive watch faces if you buy the Nike or Hermès editions of the Series 7. The Hermès options are a little “meh”, but the Nike watch faces are pretty creative! They’re colorful and move around as you move, which I haven’t seen in any other watch faces.

The Series 3 and SE models are still available (and the Series 6, for now)

The last item on this list of Series 7 updates is good news. Apple has decided to continue offering the Series 3 and SE versions of the Apple Watch.

These are both great budget-friendly options (under $300 and packed with features). I’ve been using the SE for the last year and have loved it.

And for kids, the Series 3 is a durable and convenient way to keep in touch. You can manage a child’s Apple Watch through Family Setup, and the Series 3 is perfect for this.

Who should buy the Apple Watch Series 7?

And that brings us to the end of this post! Before closing out, let’s go over who should (and shouldn’t) buy the Series 7 – in my opinion, anyway!

To me, the new Apple Watch is a quality-of-life update. That means there’s nothing groundbreaking here – it’s just some subtle improvements to keep this device relevant in 2021. 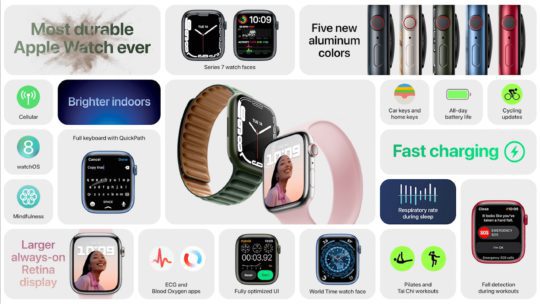 For buyers, that means this is a passable upgrade. If you already have the Series 6, you can comfortably skip the Series 7. You aren’t missing anything worthwhile, though you could probably use a $79 battery replacement.

If you’re using the Series 5 or older, though, then this represents a substantial upgrade. You’ll get new features like ECG, blood oxygen monitoring, and a great new display.

The Series 7 could also be a decent update for SE users who now want ECG and blood oxygen monitoring. These devices perform similarly to one another, but only the 7 has these extra metrics.

In all other cases, I think you can wait for the Series 8 before making your next Apple Watch purchase!

Most of what’s new is in watchOS 8, not the Apple Watch Series 7

Alas, most of the big and exciting features coming to the Apple Watch Series 7 are coming to all Apple Watches on September 20th. Those features are, of course, tied to watchOS 8.

watchOS 8 is going to come with a plethora of new features and capabilities, as well as an improved version of Fitness+. And best of all, this update is free!

So don’t be too oversold on this new Apple Watch – you’re going to get most of what makes it great on your older model, too.

For more news, insights, and reviews on all things Apple, check out the rest of the AppleToolBox blog! We’ve been covering everything announced at the California Streaming event, including the new iPad mini, so be sure to tune in.