You are here: Home / Mac / Everything You Should Know About Apple’s First-Party T2 Chip

While both devices are notable updates to aging products, they also share something else in common: Apple’s proprietary T2 chip.

That brings the total number of Macs equipped with the first-party silicon to four. The iMac Pro desktop and the 2018 MacBook Pro lineup also include the T2 chip.

But what is a T2 chip — and what does it mean for you? Here’s everything you need to know.

What is the T2 Chip?

The T2 is basically the second generation of Apple’s proprietary T-series silicon. The T-series are ARM-based System on Chips (SoC) that add a slew of functionality to the company’s Macs.

To be clear, the T2 isn’t the primary processor — so it won’t be doing any heavy lifting as far as performance.

But it does efficiently manage a variety of Mac subsystems, allowing Apple to streamline the internal architecture with a single piece of first-party silicon. It also unlocks the door for others modern Mac features.

Apple introduced its first T-series chip — the T1 — in the 2017 MacBook Pro with Touch Bar lineup. That chip drove the System Management Controller and facilitated Touch ID on that system.

The updated T2 chip runs its own operating system called BridgeOS, sports a Secure Enclave, and combines other subsystem capabilities. As we mentioned, it’s now included in four Mac products (with others likely to come).

Which brings us to how the T2 benefits the end user.

As we mentioned, Apple’s T2 SoC combines several subsystems under one roof (so to speak) and adds other features. Mostly, that means enhanced security features, but it does carry other benefits. 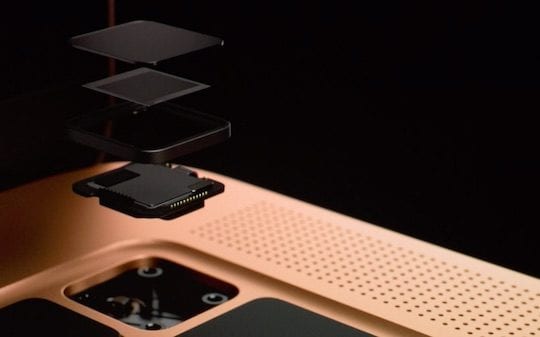 Now that the Apple 2018 MacBook Air is featuring the T2 chip, we wanted to highlight the benefits that this hardware level security offering provides to you.

Here are some of the more important ones.

Secure Boot is an element embedded within the T2 chip that significantly enhances the security of Macs outfitted with it.

Basically, the T2 determines and ensures that a legitimate and trusted operating system loads when a Mac is started up — weeding out compromised or fraudulent operating systems.

When you turn on Full Security mode, the T2 locks the gate on all operating systems and software unless it’s your current signed OS and signed Apple-trusted apps. It also locks down external media, like Thunderbolt drives, from booting up.

The T2’s SSD Controller is a related subsystem controller that allows for quick and seamless full-disk encryption.

Basically, the T2 chip automatically encrypts your drive whether or not you have FileVault enabled. Without FileVault, your drive will be decrypted and mounted when connected to your primary Mac, however.

This encryption also fully lives on Apple-designed silicon, which means that your data is never shared with third-party processors like the Intel chips in current Macs.

It also means enhanced performance with SSD. If you’ve used FileVault in the past, you may have noticed the long encryption times.

On Macs equipped with a T2 series, enabling FileVault is a nearly instantaneous process and doesn’t slow down your SSD performance.

But it also packs a Secure Enclave similar to the ones seen in new A-series iOS device chips.

That means that Apple’s notoriously secure encryption will protect the fingerprints and keys stored in the Secure Enclave. It stores the data locally and doesn’t share it to third-party systems or platforms.

The T2 chip is mostly security-focused, but it does offer other enhanced features and capabilities over Macs without it.

That’s because the T2 also packs an image signal processor and an audio controller.

The audio controller also significantly boosts the microphone quality for audio recording or FaceTime calls and increases sound output for Macs equipped with a built-in speaker.

On a similar note, Apple also expanded on the gatekeeping capabilities of its T2 series chip today.

Notably, the T2 will help stop hackers from accessing the FaceTime camera and microphone on compatible Macs.

Largely that’s because of a hardware disconnect that disables the microphone whenever a MacBook Air or MacBook Pro lid is closed. Apple says hackers can’t override the system remotely, either.

On certain T2-equipped devices, the chip also allows for always-on Hey Siri functionality. That allows you to easily invoke the digital assistant without any button presses.

Apple also showed off the fact that the T2 can have a significant positive effect on performance. With new HEVC video transcoding, users that work with video apps could see their workflow bumped up 30 times faster.

The Future of the T-series and The Mac

It’s pretty clear to see that Apple’s T-series chips are here to stay — and that could have big implications for the future of the Mac.

The T-series chips have integrated a number of subsystem controllers and security features. That’s a trend that is only likely to increase, especially when you think about it in context.

Some rumors indicate that Apple will swap Intel processors for its own first-party chips over the next couple of years. The T-series chip, while it isn’t a primary processor, is the first step in that direction.

That first-party primary processor is also rumored to be ARM-based, like the T2 and the chips found in iPhones and iPads. For one, that brings the renowned security and A/V benefits of iPhones to the Mac lineup.

But it could also hint at Apple’s future plans to bring its computers more in-line with their mobile devices. We don’t expect Apple to blend the iPad and Mac lineups anytime soon, but the company is working on a way to streamline cross-platform apps with its so-called Project Marzipan.

In any case, the T-series SoC — and other ARM-based, Apple-designed chips — are likely to play a massive role in the future of the Mac.