You are here: Home / iPhone / Get an ‘Item Detected’ Message on iPhone XS, XS Max or XR? Here’s Why

Apple’s new iPhone XS, iPhone XS Max and iPhone XR devices sport a wide range of upgrades and new features. But not all of them are easily detectable.

For example, you may have noticed a random notification that you’ve never seen before on your new iPhone — something that may be similar to what this Reddit user spotted while in a McDonald’s.

This notification will say Item Detected and will show a small wave signal icon. It may even prompt you to click on it and open a URL in Safari.

These Item Detected notifications may be confusing or even startling to some users, particularly as Apple has never really expanded or detailed the feature. But it’s not really anything to worry about, mysterious as it is.

So what’s going on?

Everything to Know About iPhone NFC Reading 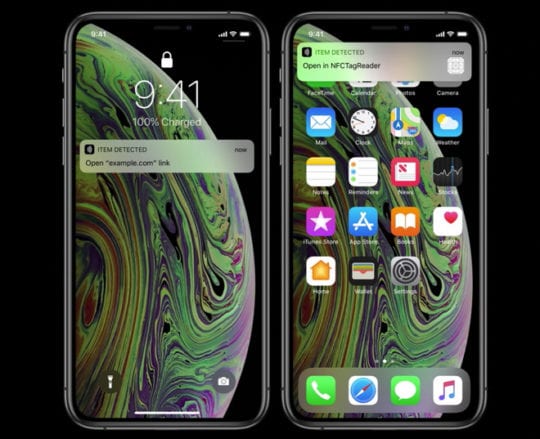 Basically, the Item Detected notification is part of the Core NFC API built into iOS. It was first introduced in iOS 11, but the 2018 stable of handsets added new capabilities.

When your new iPhone detects an NFC tag, it’ll bring up the URL encoded within it. But what is NFC and why is it showing you random notifications?

Here’s what you should know.

NFC, or near-field communication, is a short-range wireless communication protocol. It’s similar to systems like Bluetooth in functionality, but it’s shorter-ranged and is typically used for different applications.

Notably, that includes contactless payment systems like Apple Pay — which uses and relies on NFC.

As mentioned, NFC doesn’t have much of a range — about 1.5 inches.

But NFC tags themselves can be quite varied. They can be embedded in anything from the aforementioned contactless pay terminals to small stickers.

Do iPhones Have NFC?

Basically, any iPhone that supports Apple Pay has NFC capabilities. But, as is typical of iOS platforms, Apple kept access to its NFC readers under lock-and-key.

This has changed in iOS 11 with the introduction of the Core NFC API. This essentially opened up the door for app developers and third-party systems to access an iPhone’s NFC reader.

This functionality is still somewhat restricted. But the iPhone XS, XS Max and XR change that.

Previously, because of Core NFC restrictions, users needed to open a third-party app to access an iPhone’s NFC-reading capabilities.

But on the 2018 iPhone lineup, Apple has added support for Background NFC Tag Reading. (iPhone X devices and older do not support background tag detection.)

Essentially, when there’s an NFC tag encoded with a URL or message, the iPhone can detect it and push a notification with the option to open said address or message. Some NFC tags can also open third-party apps if tapped on.

It’s important to note this won’t do anything automatically — a user must explicitly tap on a notification to open the Item Detected NFC message. That helps to mitigate the possibility of trolling or sending users to malicious websites.

There’s no need to open a third-party app or have it running in the background. NFC tag detection is now built into the operating system with some limitations.

NFC reading will also be disabled for security purposes in some instances, such as when the camera is being used or the Apple Pay Wallet is open. Turning on Airplane Mode also disables background NFC detection.

What Should I Do?

In the wild, most of the NFC tags you’ll encounter will probably be used for marketing or advertising purposes.

They may be embedded in physical ads, posters or placed throughout amusement parks or other locations. But, of course, there’s always the opportunity for pranking or malicious attacks.

Put simply, if you get an Item Detected notification with a sketchy URL, it’s probably a prank at best. At worst, it could lead to a phishing website or be used for another malicious attack.

If you have any doubt, we recommend that you don’t open it. The tags aren’t persistent — they’ll disappear when out-of-range or if enough time has elapsed.

The Future of NFC

Apple is notoriously strict with opening up access to certain parts of its operating system. That’s good for security and privacy, but it does make iOS falter in terms of customization when compared to Android.

But opening up access to the NFC reader with the Core NFC API bodes well for Apple users. At their fullest extent, NFC tags can actually be used for really clever and production purposes.

At WWDC, Apple actually showed off the fact that some Apple employees are using NFC built into Apple Watches to open doors. It also used NFC authentication for WWDC passes stored in the Wallet app.

On Android, which has long had NFC readings, users can buy their own NFC tag stickers and encode them with certain functionality.

You may be able to have an NFC tag in your car that automatically turns on Do Not Disturb While Driving or a “bedtime” NFC that silences your phone and dims your screen. When integrated with HomeKit, they could even be used for home automation purposes.

That’s not the reality now, however. But with Core NFC, Apple has a great opportunity to significantly expand an iPhone’s capabilities. It just has to use it.