You are here: Home / iPhone / How to Mirror Your iPhone Screen to Your Mac

Phone screens have gotten much bigger than they used to be, but they still pale in comparison to your Mac’s display. If you want to show a report or video to a few people, you’ll have a much easier time doing it on your Mac than on your iPhone, no matter how big it may be.

With the introduction of macOS Monterey, you can now treat your Mac as an AirPlay display, just as you would an Apple TV. Unfortunately, this only works on relatively newer Macs, so we’ll show you how to mirror your iPhone to your Mac if your computer isn’t AirPlay-ready.

To mirror your iPhone to your Mac, you’ll need both devices to support Apple’s Continuity feature. On the iPhone side, this is relatively simple. If you have an iPhone 7 or newer, you’re compatible with Continuity.

If you’re not sure about your specific Mac model, see Apple’s support page on Continuity system requirements.

Mirror iPhone to Mac With AirPlay

Assuming your iPhone and Mac support Continuity, and you’re running macOS Monterey, mirroring your iPhone to your Mac is a relatively simple process.

To mirror your entire iPhone display, then tap the Screen Mirroring icon, represented by two overlapping rectangles. Tap this, then in the menu that pops up, you should see your Mac available as an AirPlay destination. Select it to start mirroring your iPhone screen.

If you only want to mirror media like a video, simply look for the AirPlay icon as you normally would. The only difference is that instead of an Apple TV or other device, you select your Mac running macOS Monterey as the destination.

Mirror iPhone to Mac With QuickTime

If your iPhone or Mac doesn’t support Continuity, you can still mirror your iPhone on your Mac. You have two options. You can use a third-party app to enable AirPlay, but these can be flaky, and they aren’t free.

Your other option is to use a Lightning to USB cable and mirror your screen with QuickTime. This is somewhat of a workaround, but it doesn’t require spending any extra money, and it works just fine.

Connect your iPhone to your Mac using the cable, then launch QuickTime. Select File -> New Movie Recording. Now click the arrow next to the red Record button and select your iPhone as the video source. Typically, this will be named something like “Craig’s iPhone.” 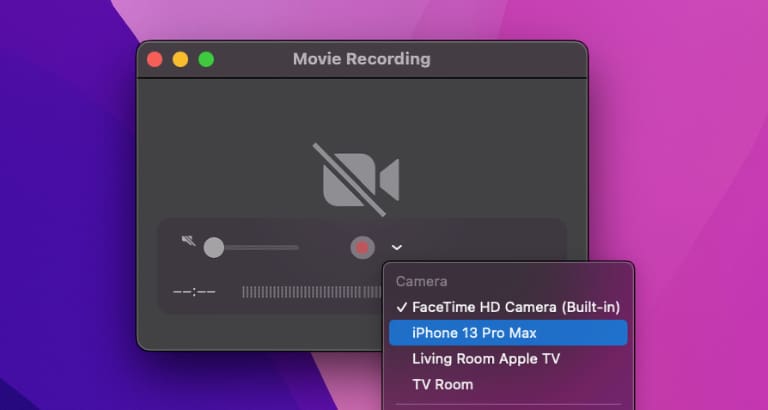 Once you’ve selected your phone as the video source, you should see your screen mirrored on your Mac. As a bonus, if you want to record your screen, all you have to do is tap the red Record button to start recording.

How to Disable AirPlay on Your Mac

At the very bottom of the list to the left, you should see “AirPlay Receiver” with a checkbox next to it. Uncheck this checkbox, and your Mac will no longer appear to other devices.

If you’re looking to disable this because you’re having AirPlay issues, be sure to take a look at our guide to fixing AirPlay problems on your Mac.