You are here: Home / iPad / How to remap Caps Lock keyboard button on iPadOS

As we continue to get closer and closer to the iPad becoming a laptop replacement, Apple is continuing to release new and useful features. One of these is the ability to remap some of your keyboard buttons on keyboards like the Smart Keyboard Folio or the Brydge Pro.

iPadOS 13.4 added these new features, along with plenty of others that have made iPad users excited. But how easy is it to really set up those modifier keys when your iPad is connected to a hardware keyboard? Let’s take a look.

Apple’s release of iPadOS 13.4 came as no shock to developers at first, but what was hidden under the hood came as a surprise. Just before making the announcement regarding the 2020 iPad Pro lineup, Apple shared the details for the latest version of iPadOS.

This update brings the software version to 13.4, and adds a slew of new features that weren’t expected to become available until iPadOS 14. Here’s a quick rundown:

Apple finally dropped iPadOS 13.4 at the end of March, giving users access to all of these awesome new features. The best part is that none of these software features are only available for the new iPad Pros, as all iPadOS devices are capable of using them.

Can you remap hardware modifier keys?

We mentioned above that Apple enabled “Full Keyboard Control” in iPadOS, and it’s not just limited to an Accessibility feature. With this, Apple has also made it possible to modify some of the keys on your keyboard to perform other actions. Here’s a list of the available modifier keys:

Now, it’s important to note that these modifiers are not a replacement for a completely different key altogether. For example, you won’t be able to remap the Control key to act as your Shift. However, if you have a Smart Keyboard Folio, then you can finally get the Escape function that should have been there from the start.

The process for remapping your Caps Lock keyboard button is pretty simple. This is largely thanks to the fact that the feature isn’t hidden under Accessibility. Instead, you access it from the main Settings app under the General panel. Here’s how to remap your various keys:

You can repeat the steps above to go through and remap any of your modifier keys to act as something different. One that we truly enjoy is remapping the Control key to Escape, as there’s no such option on the Smart Keyboard Folio.

How to restore your Modifier Keys to defaults

From time-to-time, you can forget what modifier keys you have adjusted and set up. And this can tend to be frustrating if you get a new or replacement keyboard and find yourself tapping the modifier keys accidentally. But Apple has made it so you can reset everything and start from the beginning. 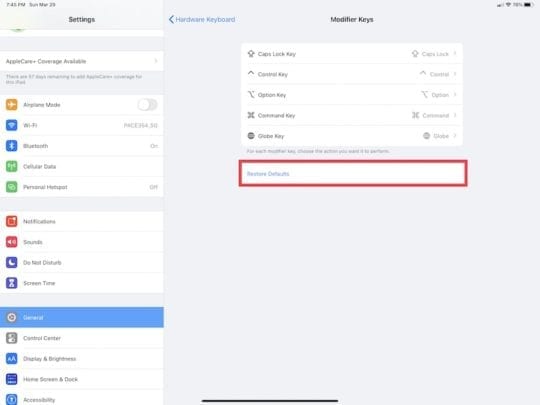 After the defaults are restored, you can go back through and set everything up again from scratch. But Apple making this a possibility is extremely convenient as we inch closer to a full “laptop replacement” experience from the iPad.

The ability to remap keys on your keyboard may not seem like a really big deal, but it’s the fact that Apple made it possible is what makes things so exciting. After seemingly ignoring it other than hardware releases, Apple seems laser-focused on creating something we haven’t seen yet with the iPad.

You get the best App ecosystem, fantastic hardware, and now the software is finally catching up. If you have any questions about setting up these keyboard modifiers, let us know in the comments below and what keyboard you are using!