Apple has finally added a feature to the iPhone that almost every iPhone user in the world has been waiting for: The ability to use Face ID while wearing a mask.

This feature came with the recent iOS 14.5 update and uses your Apple Watch in tandem with your iPhone. By checking that you have both devices on your person, your iPhone will accept your masked face where it would normally deny you access.

For users without an Apple Watch, there still isn’t an official way to use Face ID while wearing a mask. Apple still expects you to enter your PIN code. However, we do have a solution for this in the second half of the article.

Here are two methods you can use to unlock your Face ID iPhone with or without an Apple Watch.

Method 1: Use Face ID while wearing a mask using your Apple Watch

First, we’re going to cover the official method Apple just put out, which is the ability to unlock your iPhone using your Apple Watch if your iPhone detects that you’re wearing a mask. It looks like this feature is built on another feature that allows Mac users to unlock their Mac using their Apple Watch. From what I can tell, Apple more or less copied this feature to iOS.

Step 1. Make sure your iPhone and Apple Watch are updated

Before you can start using this feature, you need to have the iOS update that brings it your iPhone installed on your device. To make sure you have iOS 14.5 installed, open the Settings app on iPhone, tap General, and tap Software Update. 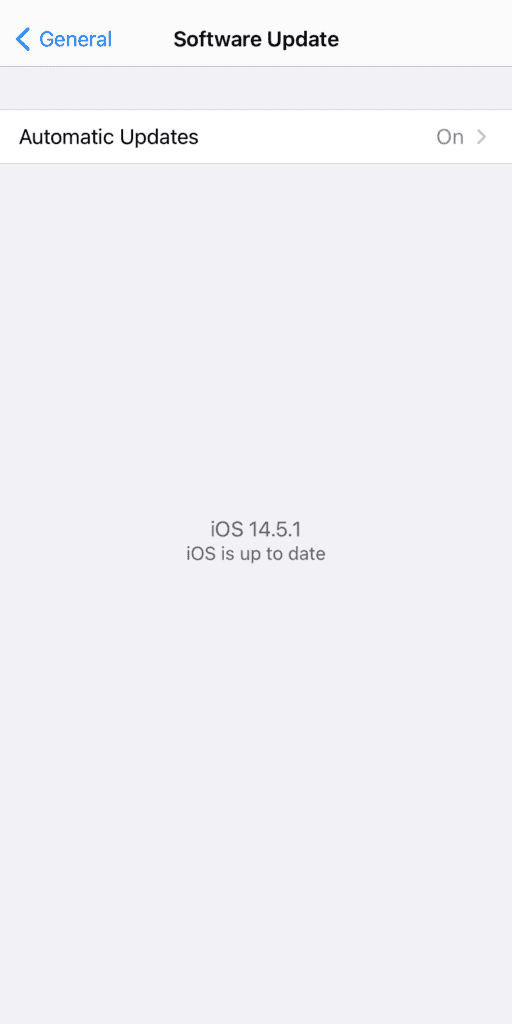 On this screen you’ll see one of two things:

If you are running an older version of iOS, you’ll need to update your iPhone. Just tap Download and Install, enter your passcode, and connect your iPhone to a charger. It should be done updating within 30 minutes or less.

From there, you’ll also want to make sure your Apple Watch is running the latest version of watchOS, which is watchOS 7.4.1 (at the time of writing). You can check this by opening the Watch app on your iPhone, tapping General, then Software Update.

If you need to update your Apple Watch, start this process as well. If you’re all updated, then you’re ready to move on to Step 2!

Once your iPhone and Apple Watch are both updated, you’ll have a new setting in the Settings app. This is the setting that is going to allow you to use Face ID while wearing a mask.

To find this setting, open the Settings app, scroll down and tap Face ID & Passcode, enter your passcode, then scroll down until you see a section labeled UNLOCK WITH APPLE WATCH.

Here you’ll see a green switch to the right of your Apple Watch’s name (for example, my Apple Watch is named Mel, as you can see in the screenshot above). If your switch isn’t green like mine is, tap it. Make sure that your Apple Watch is unlocked, on your wrist, and near your iPhone.

This will start a process where your iPhone is going to try and set this feature up on your Apple Watch. Ideally, this will only take a few seconds. However, I had a bit of trouble getting the switch to finally turn on. I had similar issues when trying to enable the UNLOCK WITH APPLE WATCH feature on my Mac to work, too.

What fixed this for me this time was restarting my Apple Watch and my iPhone and then trying the process again. To restart your Apple Watch, press and hold the side button and the Digital Crown until you see the Apple logo appear. Then just repeat the steps described so far!

Once you’ve flipped this switch, you should be able to start using this feature right away! Put on a face mask that leaves your eyes uncovered, make sure your Apple Watch is on your wrist and unlocked, and then swipe up on your iPhone like you normally would for Face ID.

The unlock will probably delay a second or two longer than it normally would, but it should successfully unlock even though your iPhone can’t see your full face. You’ll also feel a tap on your Apple Watch and see a notification telling you that your Apple Watch just unlocked your iPhone.

Along with this notification will be a button that lets you quickly re-lock your iPhone. This is useful for instances where your iPhone unlocks using this feature without your wanting it to.

It’s important to note that this feature is programmed to first detect that you’re wearing a mask, then to check that you’re wearing a connected and unlocked Apple Watch, then it unlocks your iPhone. That means you can’t just point your iPhone at the wall and unlock it. It’s still looking for a face, just a face that’s obscured by a mask. It will only bypass Face ID in this specific instance.

Method 2: Use Face ID while wearing a mask without using your Apple Watch

What about people who want to use Face ID while wearing a mask but don’t have an Apple Watch? There is still a way to make this work, though I have to say that it’s not ideal. It involves training your iPhone to recognize your face in a mask. Since Face ID isn’t built for this, it’s less reliable than the official method described above. This could also create a security risk wherein it becomes easier to fool your iPhone’s Face ID. Face ID was not meant to work this way, so use this method with that in mind.

To use Face ID while wearing a mask without Apple Watch, open the Settings app on iPhone, scroll down to and tap Face ID & Passcode, and enter your passcode. Once entered, you should see the following screen: 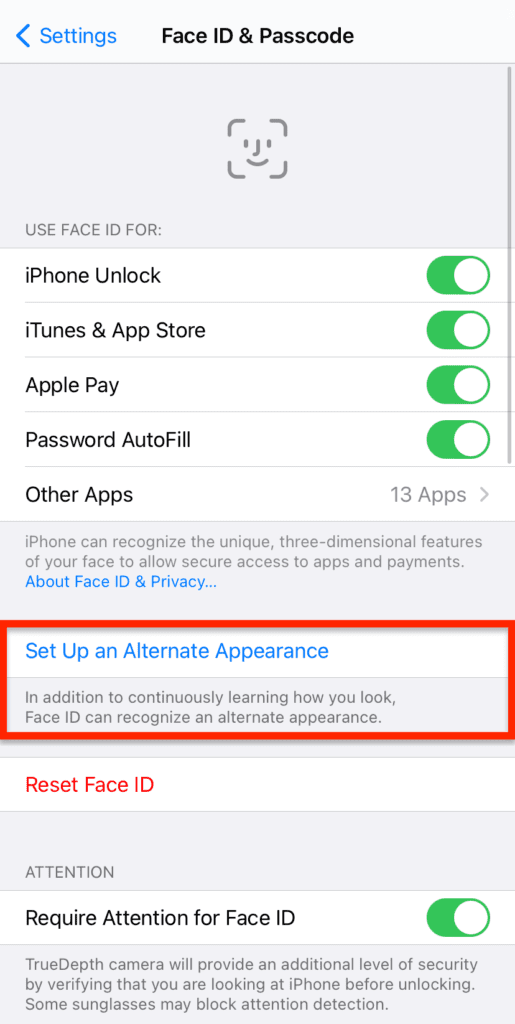 One of the first options on this screen is Set Up an Alternate Appearance. This allows you to add a “new face” to Face ID. Kind of like how you could add multiple fingers to Touch ID. You can use this feature to make it easier for Face ID to recognize you in a specific hat, wearing sunglasses, or even to give Face ID access to another person.

For our purposes, however, this feature is going to be exploited to help your iPhone recognize your face in a mask.

Step 2. Scan your face while wearing half of a mask

Alright, so here’s where the hacking comes into play. You’re going to tap Set Up an Alternate Appearance, then tap Get Started. Just like the first time you set up Face ID, your iPhone is going to start searching for your face and asking you to turn your face in a circle.

Once you’re holding your mask in place as described above, start to complete your Face ID scan. Hold your iPhone in front of your face and slowly turn your head, so that your iPhone begins registering half of your face mask and about 3/4 of your face simultaneously.

If you get a message telling you that your face is obstructed, try adjusting your grip on the mask so that your fingers aren’t in the way. If the message doesn’t go away, slowly slide your face mask more and more to the right of your face (so that more of your face is exposed) until it accepts your face scan.

You should be asked to do two scans of your face. Both times, keep your mask in the same spot.

Step 3. Train Face ID to accept your face while wearing a mask

If you still can’t use Face ID while wearing a mask after following this method, you can try to repeat it with the other side of your face. Just replace your default Face ID scan (the one of your unobscured, un-hacked, no-masked face) with another scan of your mask half-obscuring face. Only this time, hold half of your mask over the left side of your face instead.

If that doesn’t work either, then I’d say you’re probably out of luck. Remember, this isn’t something Apple wants you to do. It’s not supposed to work, so I can’t really call it a “fail” if it doesn’t work for you. Also, there’s a good chance that Apple has patched your iPhone to prevent this by the time you’re reading this.

I hope that most of the readers on this post can now use Face ID while wearing a mask. It’s certainly a lot of time and frustration saved, especially if you use a long, randomized passcode like me.

Either way, be sure to try out some of the other iOS 14 features while you’re experimenting. Or, just check out the rest of the AppleToolBox blog, where we cover all things Apple.