You are here: Home / iPhone / iPhone Workers Quit En-Masse: What Does It Mean?

It’s no secret that Apple has harnessed China’s manufacturing prowess for quite some time, as is the case with most major companies in the world. It seemed that all was well and good, seeing as the West and the East had a relatively symbiotic trade relationship with each other, despite any politics and grandstanding that happened. Even though many whistleblowers revealed the inadequate conditions that many employees faced in Chinese factories, the West continued to power through and, in fact, ramp up production. This seemed like an inevitable outcome – a result of late-stage capitalism that the average consumer couldn’t escape.

However, in recent years, we’ve seen a significant shift away from China for many reasons, one of them including consumer backlash and activism against companies that take advantage of cheap labor that exploits individuals across the world. It seems as if this movement of empowerment has also inspired the employees in these factories, as iPhone workers quit en-masse recently as a direct protest against exploitation and unfair working conditions. Find out more about what’s going on with Apple and its production line below.

The Chinese Communist Party has a strict Zero COVID policy, which saw the government placing extremely harsh restrictions on entire cities and regions if there were COVID outbreaks. The whole country closed its borders, and no vessel or person could come into or leave the country for months. Although this was the case for much of the world, certain countries were more lenient than others, citing the need to continue international trade and keep the greater economy stimulated.

With this policy in mind, China would shut down entire manufacturing cities if there was a slight COVID outbreak. If a factory had a few COVID infections, then the whole company would be shut down for an extended period of time without compensation. This Zero COVID policy also affected the country’s export-based economy. No ships could leave the country, meaning there was a mindblowing backlog of anything you could think of in Chinese ports.

Apple suffered from these delays, backlogs, and COVID restrictions, as it couldn’t import any new electronics, parts, or products. This meant that there was a shortage of products, and everything was more expensive than usual. For the most part, it seems companies like Apple can return to normal now, despite there being major signs of a global recession looming over us. Although everything is relatively normal, there are many issues that the company is facing, like consumer backlash over Apple’s continued partnership with China despite reports of the country having slave-like conditions for workers and employing Uyghur Muslims at an unfair compensation rate. Now, we see iPhone workers quit en-masse at one of Apple’s biggest Chinese manufacturing partners, Foxconn.

Why Are iPhone Workers Quitting? 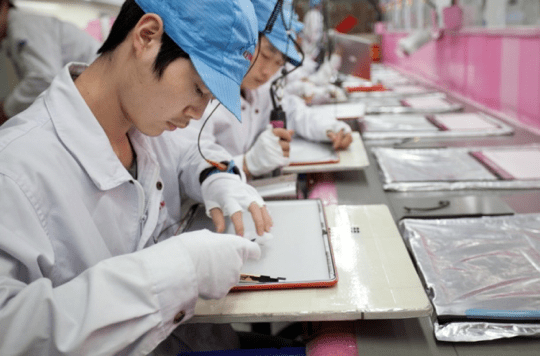 The primary reason iPhone workers are quitting is because of the manufacturing company, Foxconn, failing to pay promised recruitment bonuses and general compensation issues. Although this is the official reason, it seems as if it’s the one that broke the camel’s back, as workers face unfair working conditions due to COVID, relatively poor general compensation, and complaints about working hours. There are claims that state that 20,000 new recruits have quit due to compensation issues and general working conditions. Foxconn offered a severance package of roughly $1,400 to every employee who wanted to resign and leave. If we do the calculations, that means Foxconn lost approximately $28 million on resignations. This doesn’t account for any lost production.

What Does That Mean For Consumers?

Some reports state that the company may experience a 30% loss in production of the iPhone 14, which is an extreme hit for Apple, seeing as it’s Apple’s newest flagship product that it spent significant funds to develop and market. There is varying information out there about how badly Foxconn and Apple have been hit over this exodus of iPhone workers quitting. One employee states that this mass resignation didn’t affect production at all and that all November production targets can be met. Other spokespeople state that the resignations greatly impacted Foxconn’s reputation but not its production capacity.

It’s unclear to know exactly how badly the iPhone workers quitting hurts Apple, but what’s clear is that the iPhone 14 is very rarely available during the holiday periods, despite being out for quite some time. Although there was plenty of hype behind the product, it doesn’t seem too popular or selling well, perhaps due to limited supply or because consumers are less likely to purchase luxury electronic items when a recession is looming.