You are here: Home / Mac / MacBook “Not Charging” When It’s Plugged In? Here’s How to Fix It 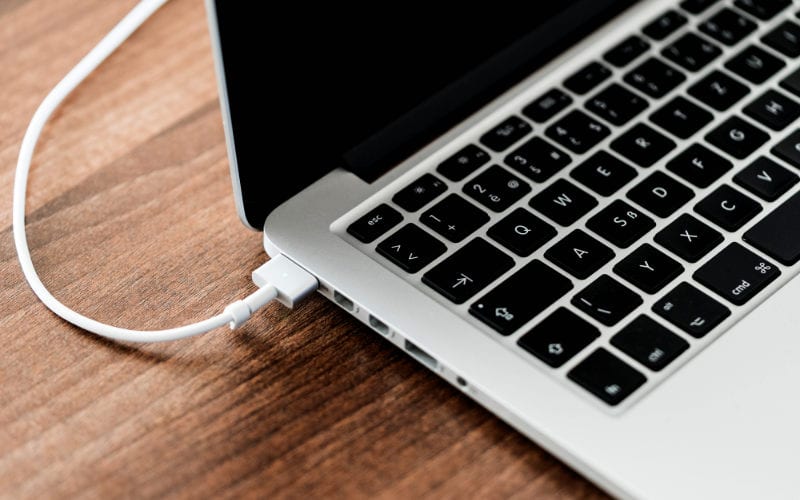 You’re just as likely to use a MacBook on your lap as you are to use it at a desk. That’s why it’s important that you’re able to charge your MacBook battery to keep it as a portable computer.

Unfortunately for some users, their MacBook says “Not Charging” in the menu bar when it’s plugged in. This happens even if the MacBook is running off the power cable and shows a lightning bolt on the battery icon.

If your MacBook isn’t charging when it’s plugged in, here’s how to fix it.

Why isn’t my MacBook charging?

The battery in your MacBook is only good for about 1,000 cycles. After that time, Apple considers the battery to be consumed, which means it might not hold a charge anymore.

If your MacBook battery is consumed, your power cable won’t be able to charge it up. Instead, you’ll only be able to use your MacBook while it’s plugged in, unless you pay for a battery replacement.

However, some users find that their MacBook says “Not Charging” even when the battery is healthy. This could be the result of a faulty power cable, corrupt system settings, or even some dirt in your charging port.

The troubleshooting steps below show you how to find out why your MacBook isn’t charging and what you can do to fix it.

Hold the Option key and click the Battery icon in your menu bar to see your MacBook battery condition. Apple classifies a battery as either Normal or Service Recommended, depending on how much charge it can hold compared to the number of cycles it has gone through.

To find out your cycle count, click the Apple icon in the menu bar and open the About This Mac window. Click System Report, then scroll down and select Power from the sidebar.

Your Cycle Count is listed under Health Information.

For a clearer and more detailed breakdown of your MacBook battery health, use coconutBattery.

Use coconutBattery to check your battery health

Take a look at the second bar, beneath the Design Capacity, to see how much your battery has aged. Hopefully, it still holds 80 percent of its original capacity or more. If not, you might want to consider getting a battery replacement.

2. Use the right power adapter

Apple creates MacBook power adapters in a range of different sizes to cater to the different batteries in each computer. If your power adapter is too small for your Mac, it might not be powerful enough to charge the battery.

This could be the case even if your MacBook runs off the power adapter.

Open the About Your Mac window from the Apple menu to identify your Mac model. Then visit Apple’s website to find out the correct power adapter for your Mac.

To find out which adapter you have, take a look at the text printed on the square section of the adapter. It should tell you the wattage: 45W, 60W or 85W, for example.

It’s okay to use a bigger power adapter than your MacBook needs; it might even charge your Mac faster. But smaller adapters aren’t strong enough to charge the battery, even if they offer enough power for your Mac to turn on.

The System Management Controller (SMC) on your Mac is the part of the logic board that controls how it works with power. Occasionally, problems arise with the SMC that might lead your Mac to stop charging, stop turning on, randomly power off, or display other power-related issues.

You can reset the SMC to fix these without risking any data loss on your Mac. Simply follow the instructions below for your particular model.

To find out if your Mac uses a T2 security chip, open the Apple menu and go to About This Mac > System Report. Then select Controller from the sidebar.

The Apple T2 chip is listed at the top of the screen if your Mac has it.

To reset the SMC on a MacBook with a T2 chip:

If your MacBook has a removable battery, take the battery out and hold the Power button for 5 seconds. Then reinstall the battery and restart your Mac to reset the SMC.

If your MacBook doesn’t have a removable battery or a T2 chip:

4. Inspect your adapter and charging port

Even with the correct power adapter for your MacBook, a physical problem might explain why your Mac isn’t charging. Unplug your adapter and take a close look at its entire length to find signs of damage.

These might include scorch marks, bare wiring, or even a twist in the cable.

If your adapter is damaged, change it for a new one and see if that fixes the problem. If it isn’t damaged, plug it on to a different Mac to see if that Mac says “Not Charging” as well.

You should also inspect the charging port on your MacBook. You might find that your MacBook USB-C port is loose or that dirt is clogging up the port. Either of these issues could explain why your MacBook isn’t charging when plugged in.

Power off your MacBook and carefully clean your USB-C port or MagSafe charging adapter using a dry brush to try to fix it. If that isn’t possible, you might need to speak to Apple about a physical repair instead.

The latest MacBook models use a USB-C port to charge. But for years, Apple used its proprietary MagSafe adapter as a charging port instead. This ingenious design connects and disconnects using a magnet. So you’ll never accidentally trip over the power cable and pull your MacBook off the desk with it.

Most people disconnect their MagSafe adapter by angling it upwards. However, some users found that “yanking” their MagSafe out horizontally fixed charging problems with their MacBook.

Brace your MacBook before doing this and be careful not to damage the cable by pulling on it too hard. You also may need to connect and disconnect the MagSafe connector in this way several times for the fix to work.

We think this method works by using the magnetic force to unstick the metallic pins within the MagSafe connector. Occasionally these pins get stuck in a depressed position, meaning they can’t connect to your Mac when you plug it in. “Yanking” the cable horizontally could force them out of this position.

6. Speak to Apple about battery replacements and repairs

If you found that your MacBook isn’t charging because the battery is consumed or because of a physical problem with the charging port, you should speak to Apple directly about getting a repair.

Apple covers every MacBook with a limited one-year warranty, but you may be covered for repairs beyond that by extended coverage or consumer law.

Visit Apple’s Get Support website to speak to Apple about scheduling a repair. Even if Apple refuses to fix your Mac for free, you don’t need to pay anything to find out what the repair quote is. Then you can take that to third-party service providers for a better offer.

Let us know in the comments if your MacBook says it’s “Not Charging.” Did the suggestions above help you to fix it? And if not, what does Apple say about this issue?