You are here: Home / Reviews / The Best Comic Book Apps For Organizing Your Collection

In today’s post, we’re going to be geeking out a bit. I’ve been an on and off again comic book reader for a few years and have recently dived headfirst into the hobby once again. As my collection has been growing, it’s led me to the question: What are the best comic book apps?

We’re going to answer that in this post. Below are what I believe to be the best solutions for keeping up with your comic book collection, all of which can be done with nothing more than an iPhone, iPad, or Mac.

Without further ado, let’s get started!

The best comic book apps for organizing a collection in 2022

First on our list of the best comic book apps is the one that I use. And that app is Numbers.

For those that don’t know, Numbers is the built-in spreadsheet app on all Apple devices. If you own an Apple device, then you probably have access to the Numbers app.

There are a few reasons why I use this app over an app that’s specific to comic books:

In other words, it’s a simple tool that gets the job done well. And of course, you can just as easily use Google Sheets or Microsoft Excel, if that’s your thing.

Now, even though I like using the Numbers app for organizing my comics collection, it does have some drawbacks. For one thing, everything is manual. You have to type each issue by hand – there’s no fancy barcode scanning or anything like that.

It’s also not a very visual way to organize your comics. Most of the other solutions on this list make it so that you can see the cover of the comics you’re collecting. That’s not the case with Numbers.

And lastly, there’s no database behind Numbers. So if you’re entering Spider-Man #35, there’s no way to instantly know which year the series is from. You have to look this up online or check in the book itself to gauge when the comic was published. And if you don’t include dates, then you risk confusing your collection with comic series that have been rebooted. Which is, like, all of them.

So yeah! If you’re someone who doesn’t mind doing things manually and likes the simplicity of Numbers, I highly recommend it. Just know that you’re going to be doing everything yourself!

Next is a tip that might seem obvious, but it’s worth mentioning. Managing your comic book collection gets way easier if you buy digital instead of physical. And it’s generally cheaper, too.

The benefit of buying digital is that it automatically stores your collection online. This means you never lose anything, nothing is ever damaged, it’s easy to search through and organize your collection, and you can easily read what you want to read without needing to dig through a long box.

Of course, there are a few drawbacks to this. For one thing, you can’t resell your books later on. You also need a screen with some decent size. So if all you have is an iPhone, you’re going to find reading your collection to be a pain, if not impossible.

This also presents the issue of different publishers. If you buy comics from DC, Marvel, Image, and Dark Horse, then you’re going to have to switch between those respective apps to view your entire digital collection. Then there’s also the obvious drawback of not having the physical comic reading experience, which some may value.

So yeah, there it is! This is one of the best comic book app solutions, though it won’t be for everyone. It all depends on how you decide to consume your comics.

And that brings us to our first true comic book app in this list of the best comic book apps. That’s ComicTrack. Immediately, this app has a great benefit in its favor, and it’s that it’s available on iPad, iPhone, and Mac. Very cool and very helpful. 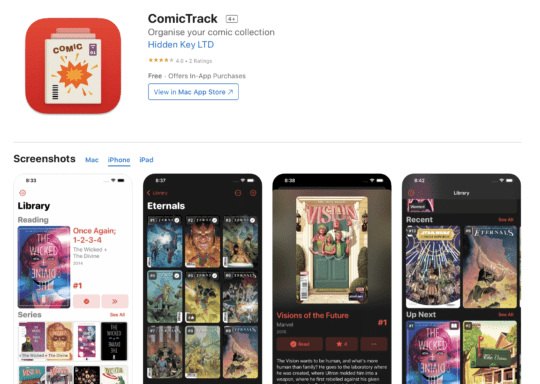 This app also has the benefit of having a database that you can access. That means you can add comic books by searching them and tapping an “Add” button. It’s that easy.

Not only is it easy, but it also means you’ll be able to view comic book covers, descriptions, series, and reading lists. You can even create your own reading lists if you want.

This is one of the cleanest-looking apps on this list, with an interface that resembles Apple Music or Books. There is a subscription for this app, but it makes sense given that you’re accessing a whole database’s worth of comic book information.

And that’s about it! This is the app I would go with if I wasn’t already using Numbers to track my collection.

Fourth on our list of the best comic book apps is iCollect Comic Books. Like ComicTrack, this app provides access to a database with more than six million comic books. That means you should have no trouble finding and adding your comics. 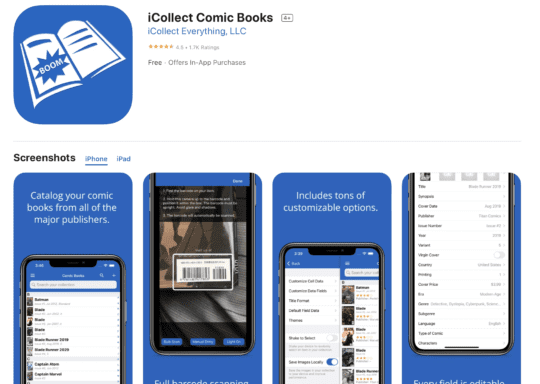 A feature that makes this app even better is that it supports barcode scanning. This means you can scan the barcode on your comics to instantly add them to the app. That will make cataloging your collection much, much faster.

Even though this app provides you with access to a database, you can still edit all of the fields associated with each comic book. You can correct any incorrect information, replace the stock cover with your variant cover, and more.

iCollect isn’t as clean-looking as ComicTrack, but it’s a little more feature-rich. This app does have a pro version for $9.99 as an in-app purchase, but it’s a one-time payment, so it’s not too pricey. You can find this app on iPad or iPhone, but not Mac.

A slightly different item on this list of the best comic book apps is Key Collector Comics App. Rather than acting as a catalog for your entire comic book collection, Key Collector is there to help you identify the valuable comic books in your collection. In other words, it’s for those for who their collection is an investment. 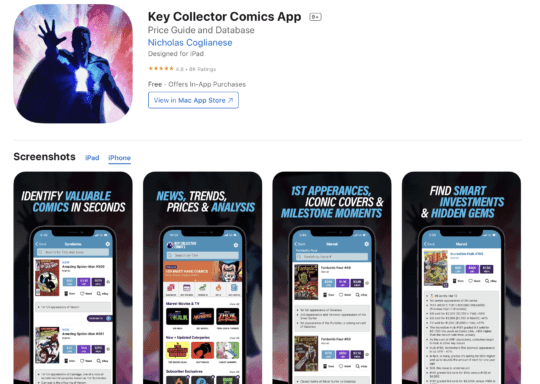 Essentially, this app helps you spot the “key” comics in your collection. Those are the ones that introduce a new character, start some event, have an exciting match-up in them, or are otherwise unique and valuable in some way.

This app goes all of the way back to the Golden Age of comics up until today, with over 10,000 comics cataloged. All around, this is a great app for those who are thinking about selling their comics or just want an idea of how valuable their collection is.

And that brings us to the CLZ Comics app. This is a straightforward app for tracking your collection. It has many of the same features as ComicTrack and iCollect, including barcode scanning, access to a database filled with images and information, and more. 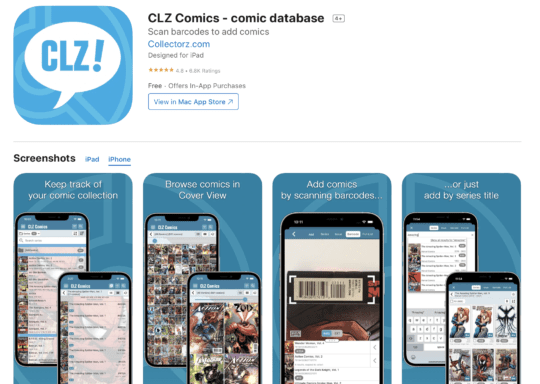 This app is just $14.99/year, which comes out to around a dollar per month. Kind of a steal if you ask me. CLZ also comes with information on key comics included, so you don’t have to use a separate app like Key Collector to keep track of your more valuable pieces.

While the design is a bit dated, it still looks pretty good. This app is updated regularly and is certainly one of the best comic book apps around. So give it a look if you’re looking for an app that has all of the features you’re looking for lumped into an all-in-one package.

For those who are more interested in new comics rather than older comics, there’s Comic Geeks. While you can track an older collection with this app, most of its features are centered around keeping up with new comic book releases and additions. 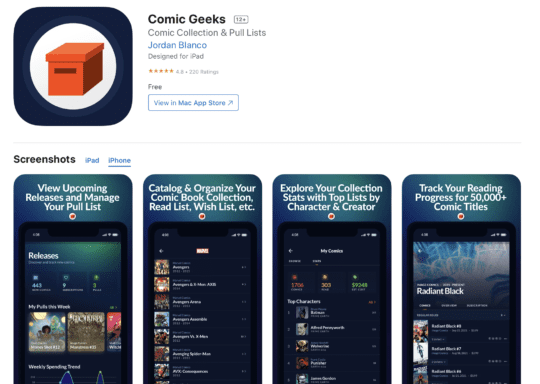 In other words, this is the app for someone who is actively collecting and looking to get more data from their hobby. It doesn’t just store your collection; it provides graphs, lists, stats, and more. Check it out if that’s your thing!

Nearing the end of our list of the best comic book apps is a bit of a loose suggestion. That suggestion is goodreads. For those that don’t know, Goodreads is a website and app that allows you to keep track of the books you’ve read, want to read, and your reviews of those books. It’s super comprehensive, so it’s unlikely that you won’t be able to find the book you’re looking for. 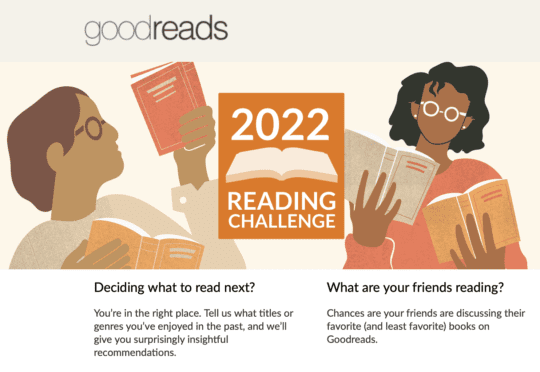 What you may not have realized is that Goodreads also supports comic books! You can find countless comic books in this app, making it easy to keep track of the graphic novels you’ve been reading.

The reason this is a loose suggestion, though, is that nothing about Goodreads is geared towards comic book collectors. You can use it for that, but it’s obvious that it isn’t what the site is for. So why bring it up?

I’m mentioning it because it’s likely a good option for those who are already using Goodreads to keep up with their book collection, too. And if you’re less concerned with cataloging all of your books and are just looking to track what you have and haven’t read, then this is a good option. 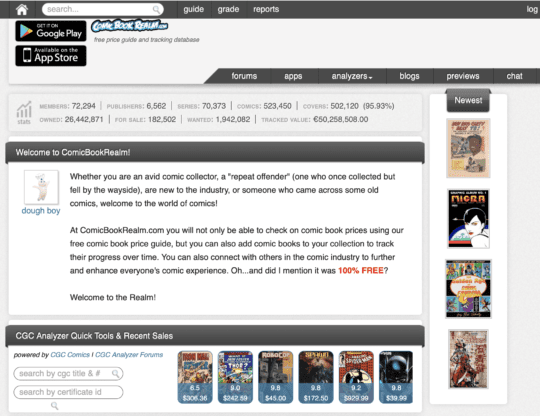 This is a completely free solution to keeping track of your collection, making it ideal for those on a budget. Just create an account and start adding your collection!

It is a bit dated-looking, which you’ll notice right away on the website. But if you’re someone who misses the “old” internet and is looking for a straightforward, free option, this is it!

Use the best comic book apps to catalog your collection

And that’s it! Those are the best comic book apps for keeping track of your comic collection. While I like sticking with the simplicity of Numbers, there are a lot of apps out there with great features. Bust out your long and short boxes and start adding your collection!