You are here: Home / Reviews / Battle of the Apps: Overcast vs Pocket Casts vs Podcasts

While many of us love being able to listen to music on the go, there are others that want something more. This is where podcasts come into play.

Most podcasts are framed like traditional radio shows. However, the benefit here is that you don’t have to worry about dealing with the radio.

Plus, with the myriad of podcast apps available on the App Store, you can take these shows with you wherever. Today, we’re taking a look at a few of the best options: Pocket Casts, Overcast, and Podcasts.

We’ll get started with my personal favorite, Overcast. This app was developed by Marco Arment and has become a favorite for many iOS users over the years.

Starting off with the design, Overcast features a minimal design, without a lot of extra frills on the surface. Opening Overcast for the first time will direct you to fill up your queue of podcasts.

Finding podcasts is a breeze, as you perform a few different steps to find the best podcast:

There are even a few categories listed, to help ensure that you find the right podcast for you. Obviously, the ‘Recommendations from Twitter’ section will require you to link your Twitter account. Then, the section will be populated with podcasts mentioned by those you follow. 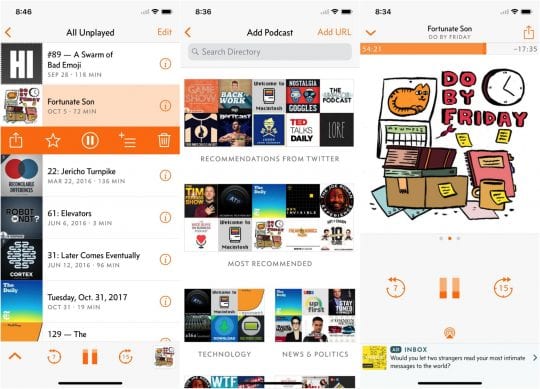 The page for showing off each podcast has a plethora of information. You will find the specific URL, podcast artwork, description, along with a list of episodes.

Opening a specific podcast episode will provide you all of the show notes. There are links and the formatting makes learning more a breeze.

One of the best parts is that even if you don’t want to subscribe to a podcast, you can still listen to a specific show. This is something that has come in handy more times than I can count.

When Overcast was initially released, there weren’t too many features included. Now that the app has been available for years, that has all changed.

Perhaps the most important feature included is Smart Speed. This feature automatically shortens the silences that arise during podcasts. 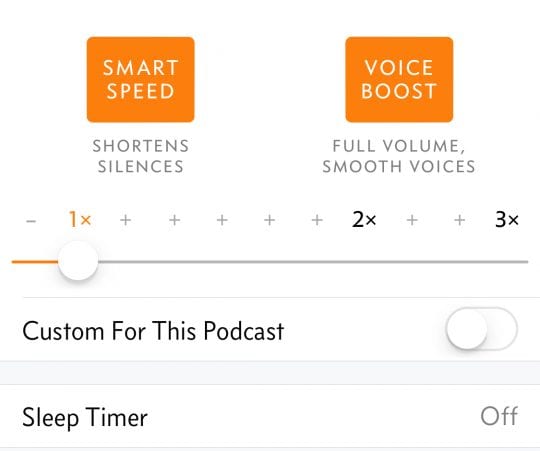 There are three options for Smart Speed – 1X, 2X, and 3X. When using Smart Speed, you can turn a two-hour podcast into one that lasts an hour and a half.

Smart Speed also allows you to customize the speed for each podcast that you are subscribed to. This will come in handy for those long-winded podcasts that seemingly never end.

Another important feature in Overcast is Voice Boost. This will normalize the sound and will adapt to your surroundings. That way, you don’t have to worry about blowing out your eardrums just because there’s a noisy passenger on the train. 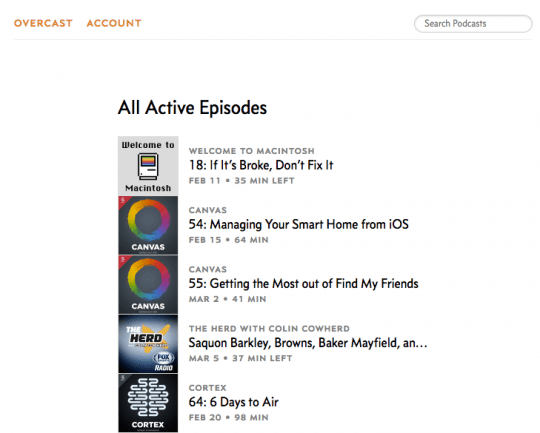 The final major feature comes with the included web app. Overcast features a rather basic web client which allows you to playback any of your favorite podcasts. You can even use Smart Speed from this client. Best of all, it’s completely free to use.

In a controversial move, Arment decided to remove the option to ‘Send to Watch’. This resulted in many negative reviews on the App Store. 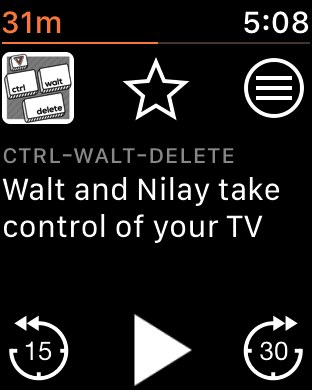 That workaround doesn’t work anymore in watchOS 4. Rewriting “Send to Watch” playback to use the only supported alternative would likely take at least another month of development and testing that I currently can’t spare, and due to its limitations, the resulting usability and experience wouldn’t be good enough for me to confidently ship.

On the bright side, you can still control your podcasts from the Apple Watch. This just isn’t the same way that it works from the iOS Podcasts app.

Everyone wants to know how much these apps cost and Overcast is free to download. However, the app is supported by ads to help Arment cover developmental costs.

If you really like Overcast, you can be a yearly $9.99 subscription. This will remove all of the ads, along with giving you a dark theme and a custom icon.

Outside of Overcast, Pocket Casts is likely the second most popular podcast app on the App Store. Part of this has to do with the fact that Pocket Casts offers cross-platform compatibility, along with some other useful features.

As is the case with Overcast, the design of Pocket Casts is extremely aesthetically pleasing. Your various podcasts are shown off on the main screen, with the various artworks shown off for easy access. 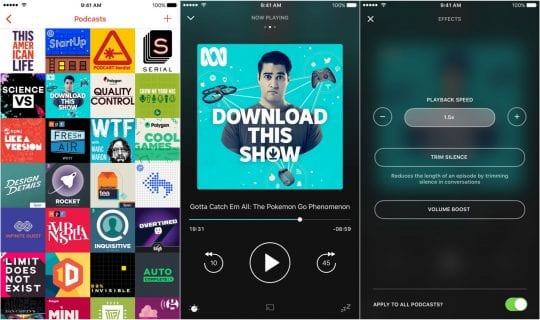 Adding podcasts is as easy as it comes, as you’ll simply need to tap the “+” icon on the “Podcasts” page. From there, you’ll find a few sections:

There is also a search bar at the top that lets you manually search or add the actual Feed URL for the podcast.

Pocket Casts also features the ability to create an “Episode Filter”. From here, you can select an array of requirements, and then the appropriate podcasts will fall into the filtered playlist.

When your selected podcast is playing, you are greeted with a boatload of different options. Obviously, you have the Play button, artwork, timeline, and skipping options.

Pocket Casts is one of the most feature-rich podcast apps on the App Store. The app allows users to control just about every setting imaginable, and then some. 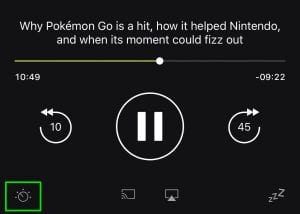 As for the aforementioned features, there are some buttons at the bottom of the ‘Now Playing’ screen for “Effects”, “Cast”, “AirPlay”, and “Sleep”. The most intriguing feature-set is the “Effects” section.

In the Effects section, there are a few useful features. From here you can control the playback speed (up to 2X), Trim Silence, and Volume Boost.

The latter two options are perhaps the most useful. Trim Silence “reduces the length of an episode by trimming silence in conversation”. Volume Boost “increases the volume of playback without changing your device volume.” 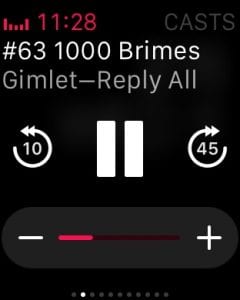 On the Apple Watch front, Pocket Casts also includes the ability to control all of your playback from your wrist. This is definitely a handy feature, and something that folks have been taking advantage of from day one.

Another handy feature that may turn some to using Pocket Casts comes in the form of its cross-compatibility. There is an Android, iOS, and even a web client that users can take advantage of. There are costs associated with this, but having the peace of mind for listening to podcasts through a new device or your computer is comforting.

Pocket Casts is quite the polished app, however, there is one rather bothering issue. It seems that with Overcast, Marco has figured out the code to offering proper silence removal.

With Pocket Casts, there are times that the silence was cut short awkwardly. While it is designed to save you time, you don’t want to have to rewind the podcast just to playback something that you missed.

The problem arises if you want to listen on the web, which will run you another $9, after a 14-day free trial. If you want the Android version too, that’s another $3.99. All-in-all, you’re looking at almost $20 to have the satisfaction of cross-platform compatibility.

The final option in this showdown is the most obvious – Podcasts. The original version was released by Apple back in 2012, and the app has seen quite the turnaround in terms of usability and design over the years.

Speaking of design, Podcasts offers a pretty bare-bones experience. Playing back podcasts will get you a basic screen with playback options, artwork, along with a playback speed option and the ability to stream via AirPlay. 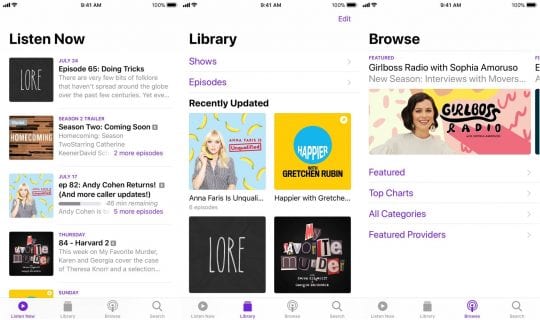 Discovering podcasts is simple here too, as you can simply tap the “Browse” tab on the bottom of the screen. From here, you are presented with the following options:

For those who want to search for a specific podcast, there is a ‘Search’ tab placed on the bottom right-hand corner for easy access. Additionally, Apple highlights a few podcasts at the top of the ‘Browse’ section, which may help expand your library.

The ‘Listen Now’ tab shows all of your podcast subscriptions. Each listing shows information from the most recent podcast, including a brief description, and how many podcasts have been released since the last time you listened.

As we mentioned before, Apple’s Podcasts app is nowhere near as feature rich as Overcast or Pocket Casts. This app is likely the best for those who don’t have a load of podcasts to manage.

There aren’t a boatload of features on board, save for the ability to stream through AirPlay, adjust playback speed, and deal with the ‘Up Next’ queue. ‘Up Next’ is Apple’s version of playlists, but it is rather a pain to get used to and does not always work as advertised.

Moving on, the ‘Library’ tab is where you will find some nifty features. 3D Touching on a podcast in your library will bring up the setlist, artwork, and description of the playlist.

That is just about the gist on the feature front, as Apple has not really packed too much into the app to make it worthwhile.

Since Podcasts seems almost like an afterthought, there are some issues with the app. Most notably is the lack of a true playlist feature.

Instead, you’ll have to attempt navigating through the ‘Up Next’ feature, and then you will still run into issues. If you’re looking for a feature-rich podcast app, you’ll want to move on. However, if you listen to just a couple of podcasts, then you’re likely to be okay using this app.

Unsurprisingly, the Podcasts app is pre-installed on just about every iPhone. There are no in-app purchases or ads to speak of, so you’ll never pay a dime to use Apple’s own application.

For those who love listening to podcasts, the real battle comes down to Overcast vs Pocket Casts. If you need cross-platform compatibility, then you’ll more than likely want to go with Pocket Casts. 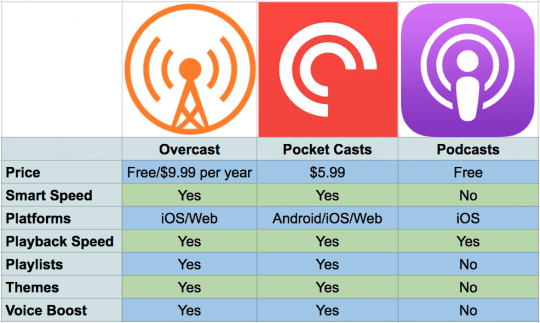 However, if you’re firmly planted in the iOS ecosystem, and like the idea of supporting Indie developers, then Overcast should be your pick. Plus, if the price is a concern, you will only have to deal with a few ads, and the $9.99 yearly subscription is an easy pill to swallow.

The nice thing about podcast apps on the App Store is that the market is seemingly continuing to grow. This means that Overcast and Pocket Casts will continue to see regular updates with new features and more.

But we want to hear from you. Let us know in the comments what your favorite podcast app is and why. Maybe you’ll end up seeing it in another app roundup in the future, as long as it has the clout to take on the big boys.