Many of us loved and used Control Center’s Flashlight or Night Shift shortcuts in iOS 10. They were easy to find and easy to use, all from a simple swipe up to get your Control Center. But then Apple releases iOS 11 and with it, a few hidden toggles for things that we used to see in our iOS Control Center. Getting confused is easy. And if so, you’re not alone. We receive a few comments or emails every day from our readers asking where’s the Night Shift Toggle in iOS 11. The good news is it’s equally easy to retrain ourselves to all these new shortcut locations. 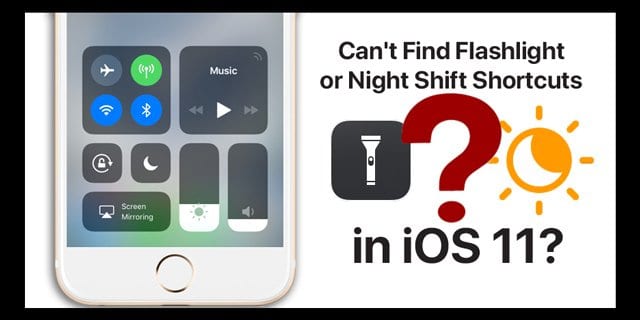 New to your Control Center in iOS 11 is what Apple calls press to control more. Usually, this action brings up a submenu of additional options or a single switch to greater control your selected feature–like controlling volume or setting a timer. For phones with 3D Touch, that means you press deeply to see more commands. For iPhones without 3D Touch and all iPads, and iPod Touches, press and hold to see more controls.

If you notice that in iOS 11 Night Shift isn’t available in your Control Center anymore, we’ve got you covered. Find it by swiping up Control Center (or swiping down from the top-right for iPhone X) and locating the brightness dimmer switch. Instead of moving it up or down, long press on it with some added pressure or for phones with 3D Touch, use this iPhone exclusive feature. This extended press opens a close-up view of your brightness scale and at the very bottom is your switch to turn Night Shift on or off manually. You can’t set up a Night Shift schedule or adjust the color temperature; it’s just a toggle off or on. 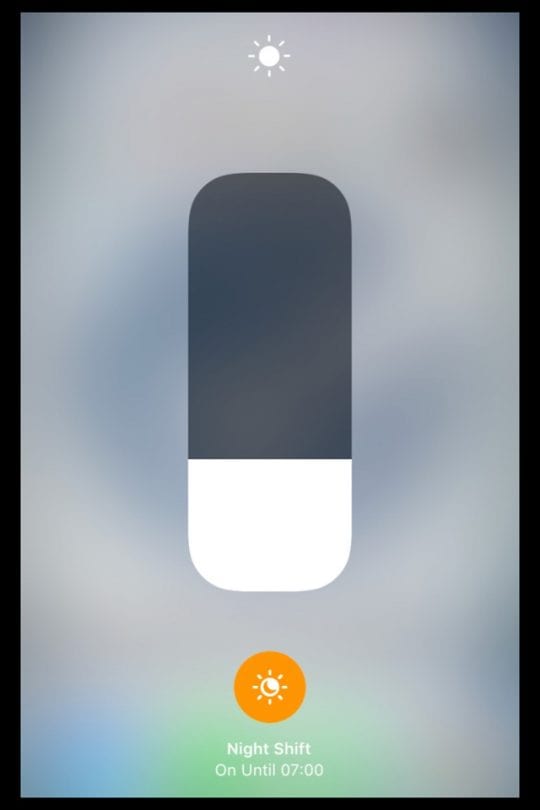 If you want to create or adjust your Night Shift schedule or change its color temperature, you still need to do that via Settings > Display & Brightness > Night Shift.

If you got Night Shift covered, but want to use your iPhone’s Flashlight and can’t find that, there’s an easy way for that too! Unlike previous iOS versions, iOS 11’s Control Center has some elements that are customizable. This list includes adding functions for things like Low Power Mode, Do Not Disturb While Driving, Screen recording, Apple Wallet, Text Size, Camera, and of course Flashlight. To get the flashlight toggle in your Control Center, you first need to add it to your customization. Go to Settings > Control Center > Customize. Find Flashlight, hit the green plus sign (+), and it’s added to your Control Center’s include list. Bring up Control Center to test it out and see if you like the icon’s placement. 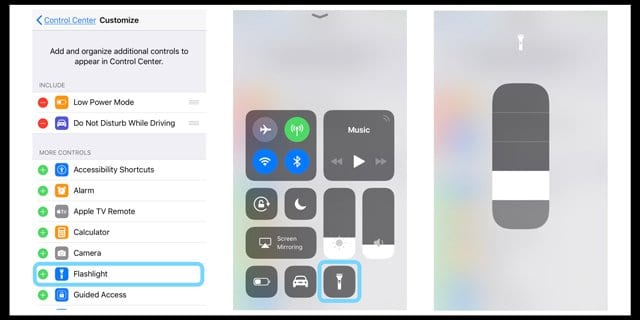 Don’t like your LED Flashlight intensity? Long press the flashlight icon in Control Center to bring up an intensity slider. Sliding up increases the amount of light and sliding down reduces it.

And if you don’t like where iOS automatically placed it, return to customize menu and tap the three lines to the right of the name and move it up or down your list of included toggles. 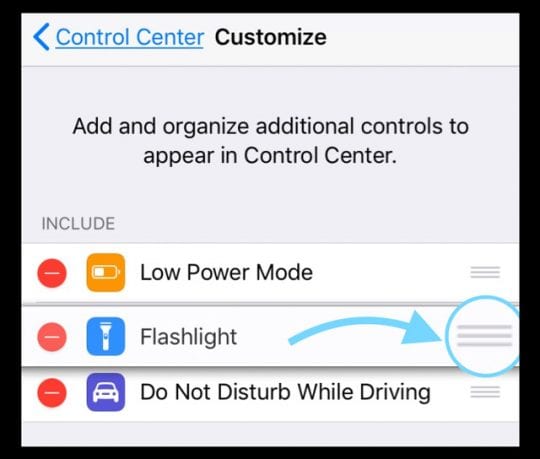 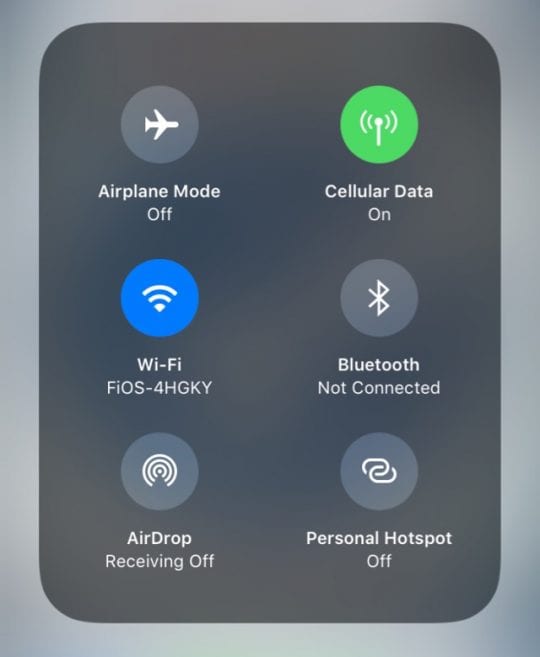 There’s a lot Apple put into the design of our ios 11 control center icons. Long pressing works on more than just Brightness! Long press Music to bring up a volume slider and your AirPlay menu options. Need AirDrop? Yup, another long press but this time in the networks group (that’s the panel with WiFi, Bluetooth, Cell Signal, and Airplane Mode.) Long press on that menu also brings up your Personal Hotspot toggle.

There are long press hidden features for your Timer and your Camera too! Want to take a selfie or shoot slo-mo? No problem, just launch Control Center and deep press the camera icon to bring up a feature-packed submenu! 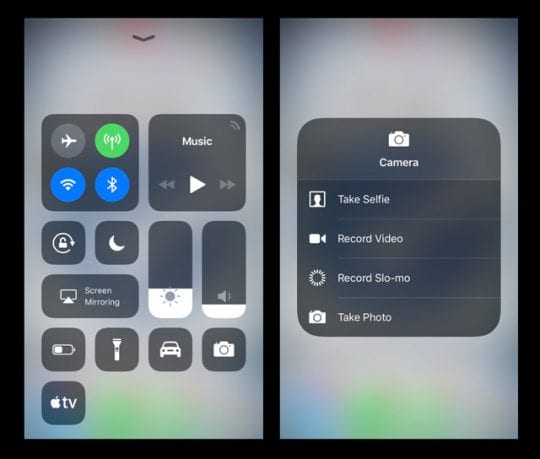 Deep press the Apple TV Remote to get an on-screen virtual remote control that works with the same gestures as your physical Apple TV Remote. That’s especially nice for those of us that often can’t find our Apple TV remote (me included.) 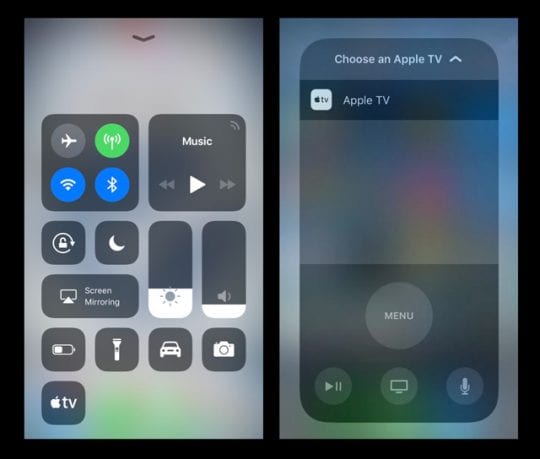 There are even more hidden menus for other customizable options in Control Center. Rather than listing them all, let’s enjoy some good old-fashioned discovery. If you find a hidden Control Center submenu that you just love (or loathe,) let us know in the comments.

Some Warnings about WiFi & Bluetooth in Control Center!

In previous iOS versions (iOS 10 and below,) the WiFi toggle in Control Centre turned the WiFi entirely off. With iOS 11, Control Center’s WiFi toggle only disconnects your device from its current network. The same goes for Bluetooth. If you want to turn either of these features 100% off, use the Settings App.

There’s a lot of depth to iOS 11’s Control Center. But it does take some time to get used to all the new functions AND how to access them. And did I mention there’s a whole bunch of press to control features that I didn’t discuss? So go on, have fun, and explore what options and customization work best for you. That’s the beauty of iPhones and iDevices–they become unique to us.

Okay, if you just don’t have the time or inclination, here’s a quick list of all those Control Center features that include a hidden menu–Home, Screen Mirroring, Notes, Screen Recording, Wallet, Hearing Aids (if applicable,) and Tru Tone (for iPad Pro 12.9-inch (2nd generation), iPad Pro (10.5-inch), iPad Pro (9.7-inch), and iPhone 8/X.) So get to it–go on an iOS 11 adventure and let us know your discoveries and thoughts.