You are here: Home / AirPods / Fix – Siri Not Announcing Messages on Airpods or Beats

iOS 13 and iPadOS introduce a new feature for headphones with Apple’s H1 chip: automatic reading of your text messages including SMS, iMessages, and even some third-party messaging services using Siri. When you enable this feature, you don’t have to pull out your phone to reads your latest text message. Siri automatically reads them to you when you wear your AirPods (2) or PowerBeats Pro headphones.

And best of all, you can also respond to those same texts–all without ever having to reach for your iPhone or type in some characters. Siri does all the work transcribing for you!

Unfortunately, due to issues isolated in testing, this feature was delayed in the initial iOS 13 & iPadOS release and is a part of iOS 13.2 and later. So to access this feature, your device needs to use iOS 13.2 or higher.uick tip

Announce message with Siri not working? Check that your device supports Announce Messages with Siri!

This feature was delayed and was not part of the public releases to iOS 13 and iPadOS. To work, your device must run iOS 13.2 or later to access this feature.

If this feature isn’t working and Siri isn’t reading your texts and iMessages, check first that you use a supported device. 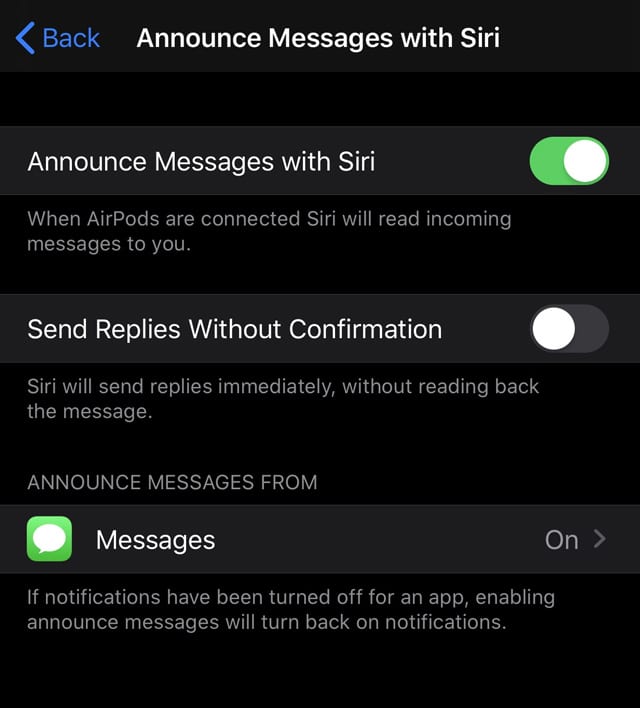 Currently, this feature only works with devices with the Apple H1 chip, like AirPods 2 and PowerBeats Pro. It does not work with AirPods generation 1.

How to tell the difference between AirPod generations?

AirPods 2 features the status light on the outside of the case (as pictured above), while AirPods 1 features it inside the case.

When you first connect your AirPods 2 or PowerBeats Pro after updating to iOS 13 or iPadOS, a pop asks if you want to enable Announce Messages with Siri. 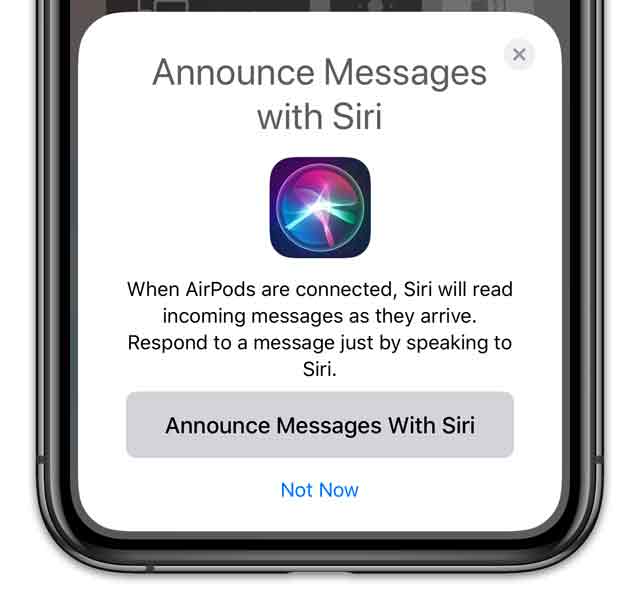 If you pressed not now, never saw this message, or want to change the setting, you can change it later in your Notifications Settings.

A lot of folks discovered they needed to re-pair their AirPods to their iPhone to get this feature to show up on their iPhones, even after updating to iOS 13+ or iPadOS and restarting!

If you previously set up “Hey Siri”, then “Hey Siri” is ready to use with your AirPods 2 once again.

This feature doesn’t work for all languages, so if it’s not working in your local language try a variation of it. For example, if you’re in the UK and it’s not working, try changing Siri’s language to English (United States) and see if it now works.

Some folks in the US discovered that it only worked when they set Siri to English (United Kingdom.) 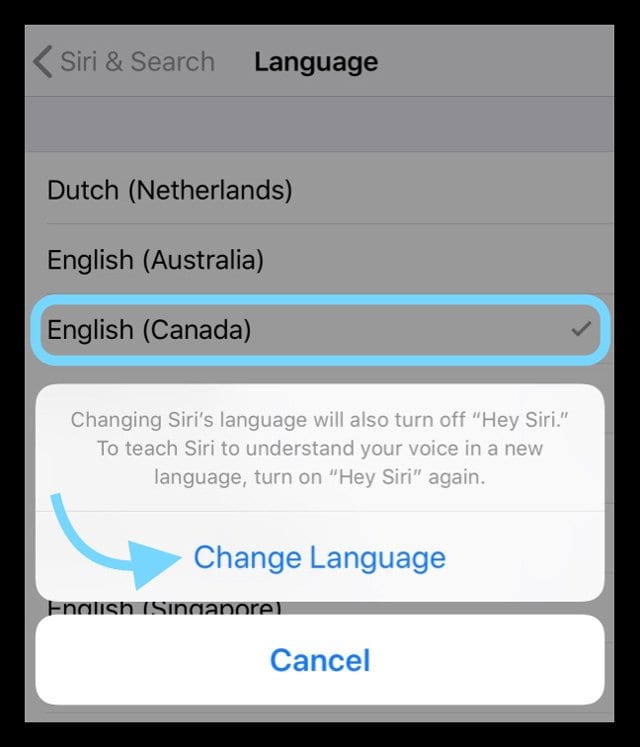 To change Siri’s language, go to Settings > Siri & Seach > Language and choose something different (that you still understand.)

When you change Siri’s language, it automatically turns off Hey Siri, so you also need to re-train Hey Siri.

How to turn Announce Messages with Siri on or off

In Control Center you can adjust how Announce Messages with Siri works by turning it on or off, muting for 1 hour, or turning it off for the day. 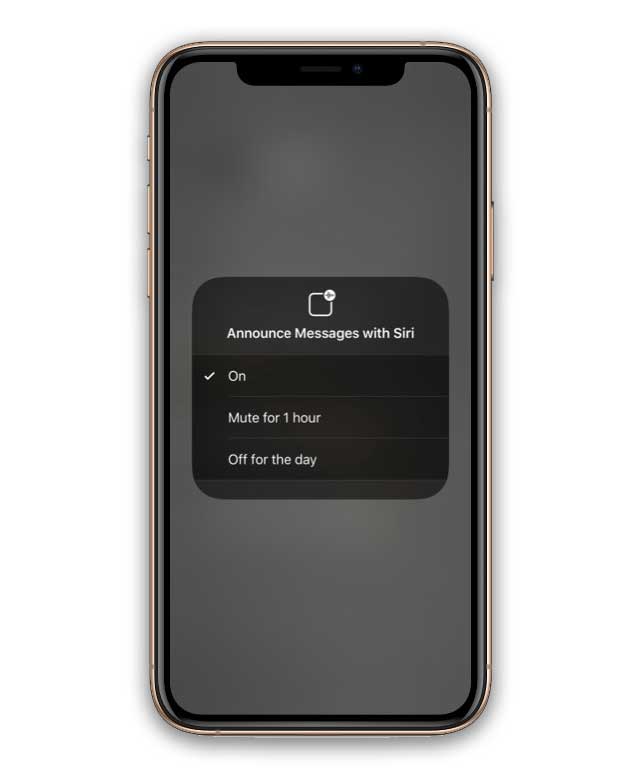 Apple gives you options on what types of messages Siri automatically announce, including texts from everyone, recents, all contacts, or your favorites.

To change this setting, go to Settings > Notifications > Announce with Siri > Tap the Messages App under Announce Messages From. 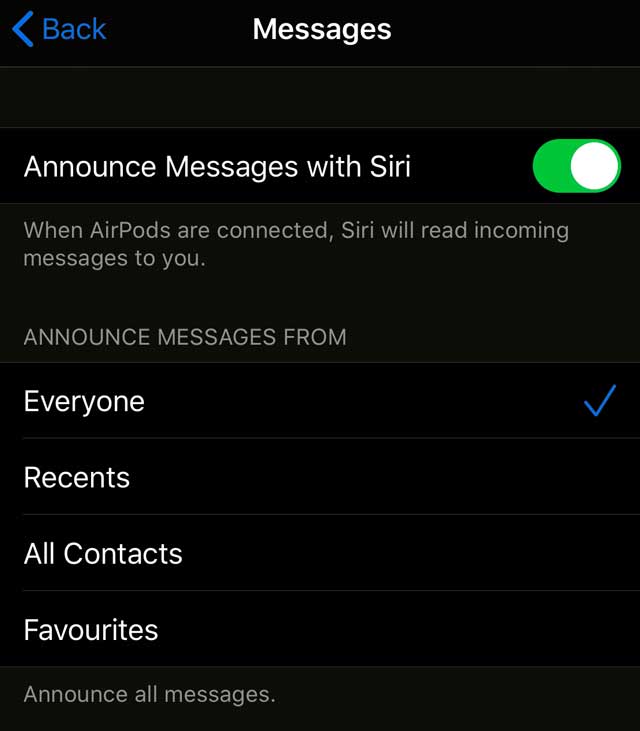 Then choose what incoming messages you want Siri to read to you.

How Announce Messages with Siri works

When a new message comes in, you hear a text tone play to your AirPods or Beats headphones and then Siri reads your message.

Then, if you want to reply, immediately start speaking after Siri finishes reading the message to you. You don’t even have to say “Hey, Siri.”

If you don’t reply, Siri pauses and asks you if you want to repeat that, call or reply. If you still say nothing, Siri cancels your reply and any music or sound you were listening to resumes playback.

Don’t have AirPods 2 or PowerBeats Pro? You can still have Siri read your messages

For AirPods first-generation, activate Siri by double-tapping your designated AirPod.

Then say something like  “Hey, Siri, check my messages.” If you have any new messages, Siri tells you who the messages are from and read them back to you, in the order your messages arrived.

If you want to hear messages only from a particular person, you can ask Siri to “read my messages from (person’s name.)”

After Siri reads a message, it asks you if you want to reply to that message–you can reply with yes, no, or if you don’t reply, Siri moves on to the next new message.

You can also ask Siri to repeat the message or read again.

Siri can read your texts from other messaging apps too as well as read things like email and documents using accessibility settings.