You are here: Home / iPhone / How to Disable Proactive Siri Suggestions on the Lock Screen in iOS 12

Are you overwhelmed by all of Siri’s suggestions since updating to iOS 12? If so, learn how to disable proactive Siri Suggestions by changing just a few features in Siri’s Settings!

Since it was initially released in 2011, Siri has always been a useful part of the Apple mobile ecosystem. It’s also been added to Apple’s other operating systems in recent years.

But in iOS 12, Siri is getting a huge suite of upgrades that will boost its usefulness, proactivity, and general intelligence. Siri’s new Shortcuts app is getting a lot of buzz, but it’s not the only big feature.

Siri’s suggestions, once a simple feature that recommended apps, is getting a significant update in the next version of Apple’s mobile operating system.

What are These Siri Suggestions?

Basically, in iOS 12, Siri will be getting an upgrade that allows it to be a bit more proactive in how it assists you.

This isn’t an entirely new ability. Rather, it’s an upgraded set of suggestions that expand on features introduced in previous versions of iOS.

For example, if you go to the theatre, purchase a movie ticket and add the ticket to Wallet, Siri can analyze that data. It will then send you a suggestion asking if you’d like to switch on Do Not Disturb shortly before the movie starts. Using geolocation, Siri will also automatically switch off Do Not Disturb when you leave the theater.

At WWDC ’18, Apple offered the example of Siri suggesting automatically ordering your routine coffee at the time of day you usually order it.

If you’re running late to a meeting or a lunch with a friend, Siri will suggest sending a message it has written itself. Listen to a certain playlist at a certain time of day? Siri might suggest that, too.

The digital assistant will also ask you if you’d like to make a certain task or habit a routine by using the Add to Siri function.

Of course, as useful as these enhanced Siri suggestions can be, there are a variety of reasons why you might want to turn them off.

For one, they can end up being annoying. That’s particularly true if you like handling or making smartphone decisions on your own.

iOS 12 does a good job of wrangling them with an updated group notifications system. But getting Siri suggestions every now and then can still clog up your Lock screen.

Alternatively, if you’re trying to maintain a healthier relationship with your phone, these Siri suggestions can end up being extra notifications thrown at you.

Most digital health experts recommend that smartphones only show notifications when productivity or human communication are involved.

A Siri suggestion, for the most part, might not be in either of those two categories.

Turn Off App Suggestions and Recently Used Apps on iPad

To turn off recent and suggested apps, you can change that in Settings > General > Multitasking & Dock. Turn off the option for Show Suggested and Recent Apps.

For many users, disabling these enhanced Siri suggestions for individual apps might be the way to go.

If you don’t want Siri suggesting a coffee order, you can disable the feature for the Starbucks app. Don’t like pre-written texts being suggested? Disable Siri suggestions for Messages. 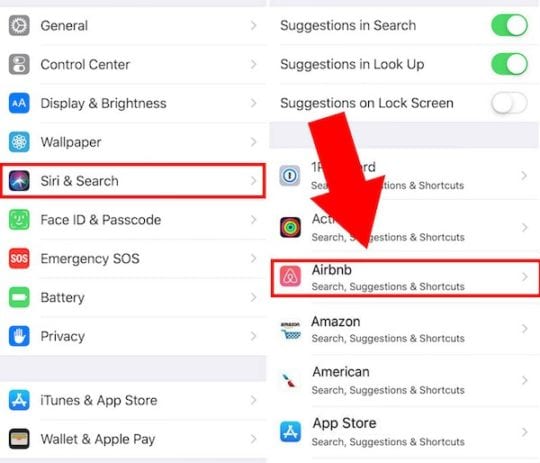 On the other end of the spectrum, some users may prefer to get rid of Siri suggestions entirely.

Luckily, it’s basically just as easy. But unlike switching off notifications for specific apps, this method comes with a few drawbacks. 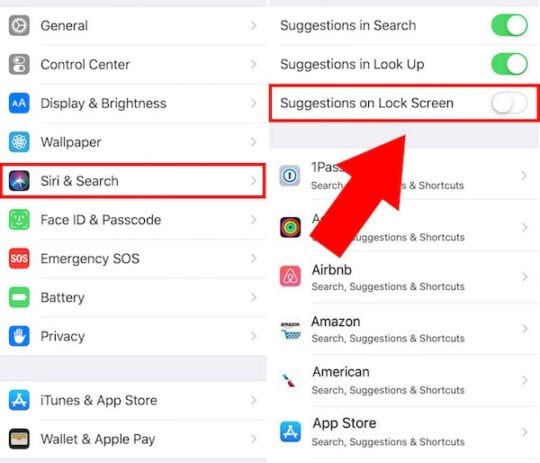 Note that this will disable Siri’s usual suggestions, too. Those could be helpful. For example, in iOS 12, Siri might suggest disabling notifications for a specific app that’s rarely used.

Still, if Siri suggestions in their entirety aren’t your thing, then this is the way to go.

Other than the Lock screen, there are a couple of other places that Siri’s proactive suggestions can show up.

For example, Siri might offer suggestion notifications when you’re using Spotlight search menu. Siri suggestions can also pop up in Look Up, the iOS 10 version of the Define function for words or phrases.

In the same Settings –> Search & Siri menu, you’ll find toggles next to these options in addition to Suggestions on Lock Screen. From here, you can mix and match where Siri suggestions show up. Just hit the toggle next to each of the three options to disable them.

If you like Siri suggestions when you’re using Spotlight search, you can leave it on while disabling suggestions on the Lock screen.

There are also Siri suggestions on the Today View pane. You can disable those by scrolling to the bottom, tapping on Edit and tapping the three-lined and Remove to disable them.