Apple really swung for the fences with the iPhone 12 lineup, bringing a total of four different options to choose from. Not only did Apple deliver on the all-new (or reintroduced) design, bringing back the blocky-design from the iPhone 4 days. But the company also re-introduced the MagSafe moniker in a unique way.

MagSafe was known as the proprietary charging method for Macs that was used for years. Then, it was eventually phased out as USB-C and Thunderbolt made it possible to use dongles and adapters for peripherals, instead of adding a slew of ports on the MacBooks themselves.

With the iPhone 12, MagSafe has made its triumphant return, bringing a unique way to charge your device, along with all-new accessories. Using MagSafe will provide the fastest wireless speeds on an iPhone, and there are new and unique MagSafe-compatible accessories being released on a seemingly daily basis. 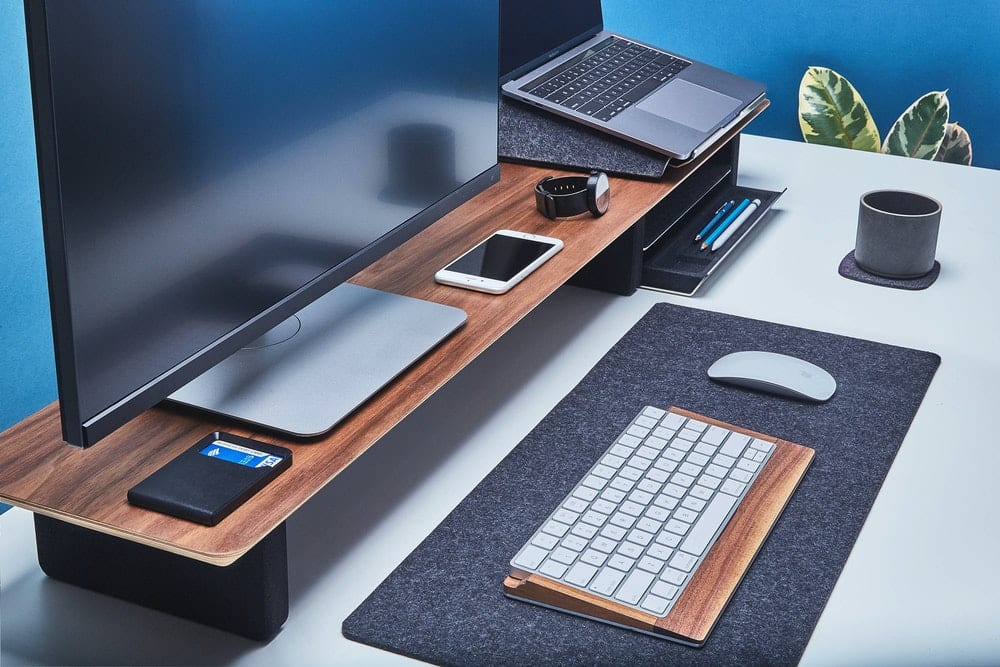 Speaking of MagSafe accessories, Grovemade is a company that has jumped in on the fun. But in a different way than you might initially expect. The company has been around since 2009 and offers stunningly-beautiful desk accessories to help keep your desk organized.

Grovemade primarily uses different types of wood to create unique and gorgeous desk accessories. Chances are, you’ve seen a few YouTubers using things like the Wood Monitor Stand, or the Headphone Stand. Grovemade has been expanding its offerings, with a focus on Mac users with products like the Walnut iPad Stand or Wooden Keyboard Tray for the Apple Magic Keyboard. 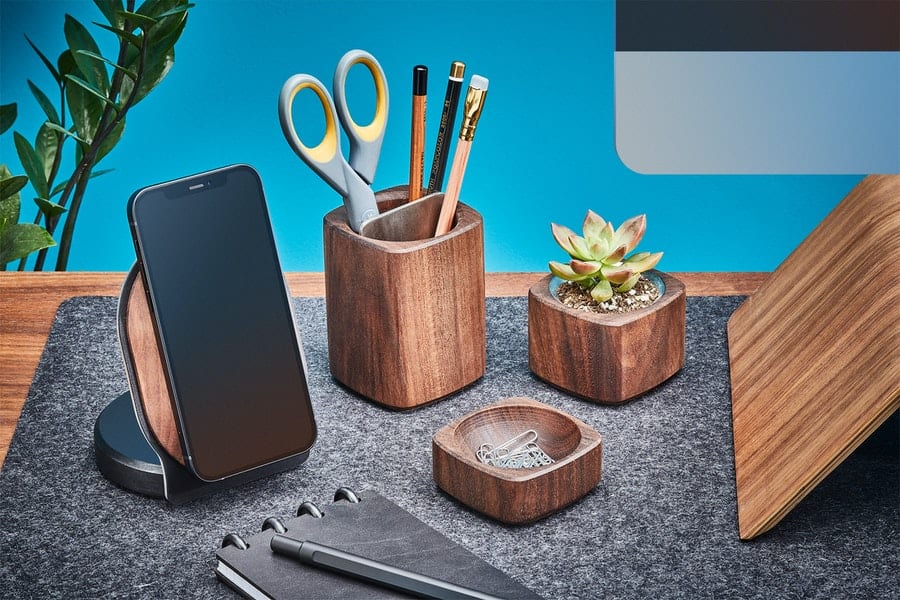 With the introduction of MagSafe and the MagSafe charging puck, Grovemade went a different route for creating a new stand and dock. Since it can be a rather daunting task for a smaller company to try and get into Apple’s accessory program, the new MagSafe Stand and Dock use your existing MagSafe charger.

Both the Stand and Dock are made from a combination of the following materials:

The other difference in materials is with the Stand. This uses Stainless Steel for the arm, along with the tanned leather that outlines the arm.

Build quality and ease of use 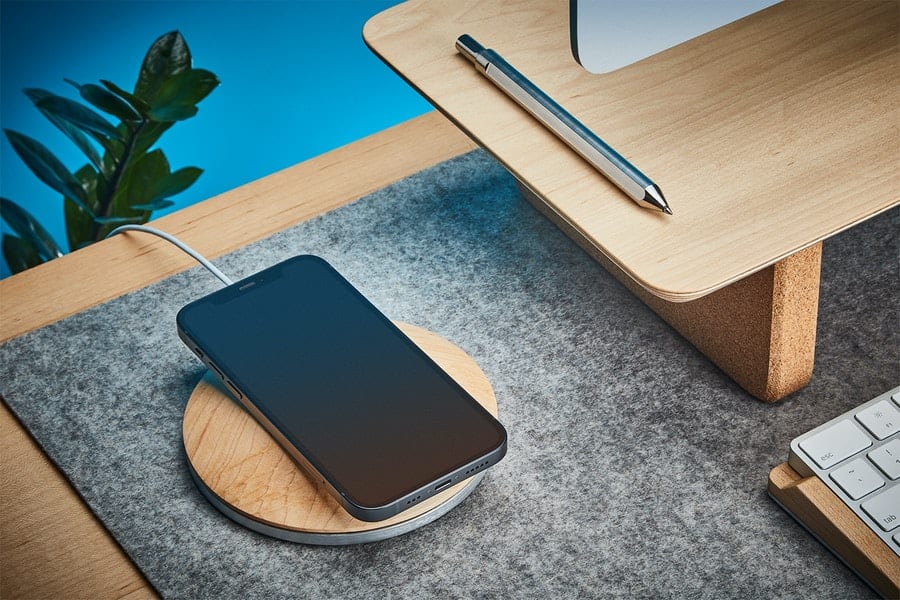 When you first take either of these out of the box, you’re going to notice one thing – these are heavy. The Grovemade MagSafe Stand weighs in at 2.9-pounds, while the MagSafe Dock comes in at 2.4-pounds. This is for good reason, and it’s not just because of the high-quality materials that are being used.

One of the frustrations of using the MagSafe puck by itself is that you have to manually detach the charger from your iPhone. Since the Stand and Dock are so heavy, this removes that frustration, keeping your MagSafe charger on the desk or nightstand. 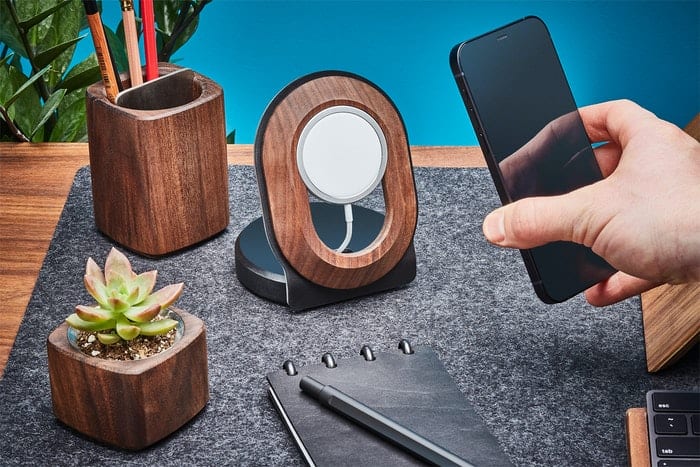 With the Stand, it’s very reminiscent of the announcement video from Craig Federhigi with the iPad Pro Magic Keyboard. Instead of having to fumble around to detach everything, you can just pull your iPhone off of either of these, leaving the MagSafe charger behind.

Installing the MagSafe charger is pretty straightforward, as you just throw the puck in the round cutout. Then, you fish the wire through the opening in the bottom of the Grovemade Stand, or the back of the Grovemade Dock.

Admittedly, these are the first accessories that we’ve used from Grovemade, but they won’t be the last. Both the MagSafe Stand and Dock are premium and look absolutely fantastic. The attention to detail is absolutely superb, and something that we wish other accessory makers would take notice of.

Plus, you can put any concerns of scratching up your desk or nightstand to rest. Grovemade has included a cork pad on the bottom to provide that “soft touch” needed. This keeps the metal base off of your desk while making sure that both the Dock and Stand stay in place. 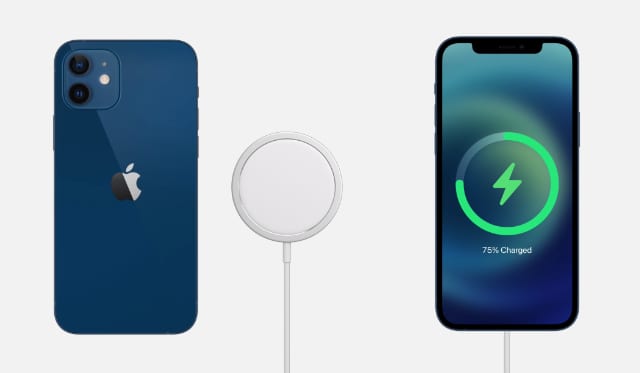 The biggest “issue” with the Grovemade MagSafe Stand or dock has nothing to do with the weight or anything else. It’s for those who don’t already have an Apple MagSafe charger on-hand.

The MagSafe Stand is priced at $120, while the MagSafe Dock comes in at $100. To get the best charging experience for your iPhone, you’ll need to tack on an extra $39 for the MagSafe Charger and another $19 for Apple’s 20W Power Adapter. Using this adapter guarantees you’ll be able to take advantage of the 15W wireless charging speeds offered by MagSafe.

That’s a total of around $180 for the Stand or $160 for the Dock. Of course, it’s a moot point if you already own the MagSafe charger and power brick, but if not, spending $200 for a high-quality MagSafe charger can be a tough pill to swallow.

Should you buy the Grovemade MagSafe Stand?

If you don’t care for the Belkin MagSafe Charging stand, already have a MagSafe charger at home, and want a high-quality charger, then it’s a no-brainer. We can’t say enough good things about these chargers, and it’s exciting to use them on a daily basis.

Having a good-looking MagSafe stand on the desk for when your iPhone 12 needs some juice, is pretty awesome. You can just glance at your phone when a notification comes in, and don’t have to worry about pulling your iPhone off of the charger, read the notification, and then put it back.

The Grovemade Dock has also become a mainstay on the nightstand, giving us the perfect MagSafe charger for overnight charging. MagSafe is absolutely wonderful, and Grovemade is making it even better with its new accessories.