You are here: Home / How-to / How to Download Dropbox for M1 Mac

On one hand, it’s great to see that Apple is finally doing something about the pitiful storage options on the Mac. For years, the base models were limited to 256GB, including any new MacBook Pro models. However, that’s all beginning to change thanks to the release of the M1 Pro and M1 Max MacBook Pros, which start with 512GB of storage. But since not everyone can go out and purchase one of these new MacBook Pro models, you’ll have to pay closer attention to your storage. This is where cloud storage solutions like iCloud or Dropbox come in, but those come with their own pitfalls.

Late in 2021, Dropbox came under fire for its inability to adapt and release a version of its desktop client for Apple’s M1 lineup of computers. The problem with the old version was that it was forced to rely on using Apple’s Rosetta 2 software, which led to even bigger issues.

It seems that the M1, M1 Pro, and M1 Max are already prone to memory leaks (which are being worked on), but Dropbox added even more unnecessary strain. Because a cloud services app like Dropbox is constantly running in the background, it’s important to keep the use of system resources to a minimum. And while Rosetta 2 is great about making it possible to run all of our favorite apps on the Mac, it’s not the end-all-be-all solution.

The public backlash put a lot of pressure on Dropbox to finally release the native ARM version of the app. Well, it only took more than a year, but the day has finally arrived.

While it’s wonderful to see an Apple Silicon version of Dropbox finally released, there is a tiny catch that you should be aware of. This is a beta version of the build that Dropbox is making available, so you might still run into other issues when trying to use the app. It will take the company and developers some time to make sure all of the kinks are worked out, but this is a big step in the right direction.

If you want to download Dropbox for M1 Mac and any Apple Silicon-powered Mac, then the steps are pretty easy. 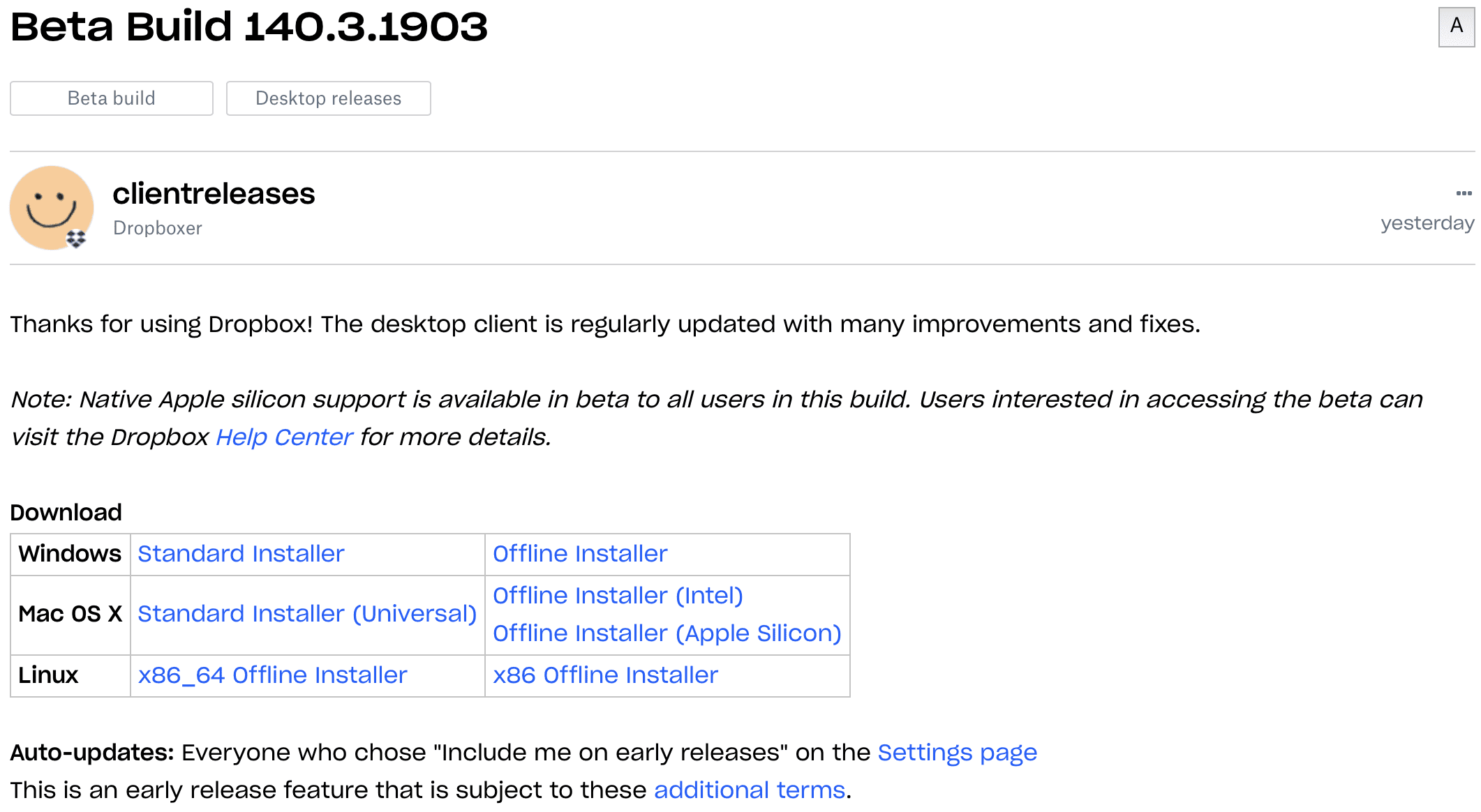 That’s it! You’ll not be able to enjoy an Apple Silicon version of the Dropbox app. This should reduce the number of potential problems that you’ll run into, notably, when it comes to the use of system resources.

It’s for this reason why we have recommended checking out something like Maestral in the past. This is a third-party Dropbox client for the Mac that is built natively for Apple Silicon.

As a note, you’ll likely see more frequent updates coming to the Dropbox app over the next few months. This is standard practice when it comes to beta software, so be sure to keep the app updated. Once Dropbox for Apple Silicon leaves the beta status, you can uninstall that version and re-install the stable version.