You are here: Home / Mac / How To Tell If A macOS App Uses Intel Or ARM

You’ve just finished setting your new M1 Mac just how you like, installed your favorite apps, restored your last backup, and are about to put this thing to the test when a question crosses your mind:

Are any of my apps optimized for the M1 chip?

The M1 chip is brand new, which means there aren’t a whole lot of apps that support it yet. Apple has managed this with Rosetta 2, which allows Intel-based apps to run on the M1’s ARM architecture. So you probably won’t notice much of a difference between your Intel and ARM apps.

Still, it’s useful information to have, and Apple allows you to check which architecture each of your apps uses. In this tutorial, we’ll show you how to determine this information for yourself.

First, you’ll want to open About This Mac. You can do this by typing “About This Mac” into Spotlight or by clicking the  logo in the top-left of the Menu Bar. 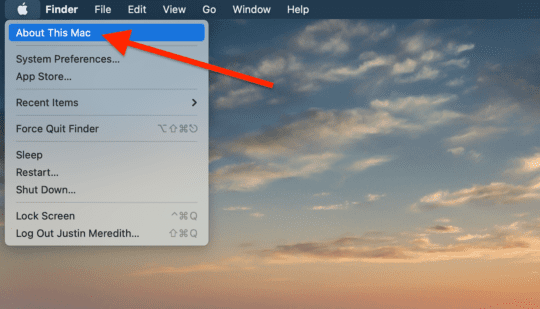 A popup will appear, giving you some basic information on your Mac, such as the serial number and macOS version. For our purposes, however, we’re going to click the System Report button.

This will open up a new window that shows more technical information on your Mac. In the left pane of this popup, you’ll find a section labeled Software and an option under that labeled Applications. Go ahead and click Applications. 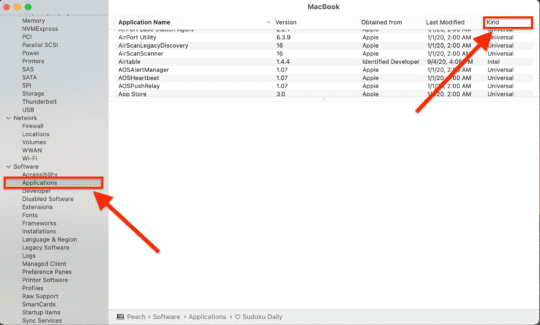 This will take you to a scrollable list of every application installed on your Mac. While there’s no search feature, you can sort these apps alphabetically, which should make it easy enough to find and check the app you’re looking for.

When you do find the app you want to identify, you can check which architecture it’s optimized for by looking under the Kind column.

I’m sure that most people who have searched for this article already have a basic understanding of the difference between the M1 chip and the previously-used Intel chips. However, you might not be as familiar with x86, ARM, or why they create compatibility issues.

Essentially, ARM (which the M1, iPhone, iPad, and Apple Watch chips use) and x86 (used by Intel) are two different kinds of processor architectures. If that sounds complicated, it’s because it is – so don’t worry! Here’s a simple way of thinking about it:

The processor is like your computer’s engine. Every click, calculation, typed letter, etc., is completed by the processor. And just like all cars have engines, all computers have processors.

Now, let’s say that you previously owned an American-made vehicle and have since switched to a Japanese-made vehicle. Both have engines that run in similar ways, but none of the parts are compatible. You can’t take components from one and interchange them with the other.

The difference between Intel’s x86 and the M1’s ARM architecture is essentially the same thing. Both processors serve the same purpose and have overlapping features. However, they also do some things differently, speak a different language, and have different compatibility needs.

This is why Apple is differentiating between Intel-optimized and ARM-optimized apps – because they run very differently on the same processor.

How do Intel-based apps run on an M1 Mac?

You may have noticed a problem in the analogy I just gave previously. If the M1 and Intel processors are as incompatible as Toyota and Chevrolet engines, how are Intel-based apps able to run on the M1 processor?

This is thanks to Apple’s Rosetta 2, which is a bit of engineering magic on your M1 Mac. In simple terms, Rosetta 2 is a service that translates Intel-optimized apps to your M1 chip’s ARM architecture.

If an app says “Do this,” in Intel-speak, Rosetta 2 translates it to ARM-speak for your M1 chip. It does this in the background, too, so you won’t be interacting with the Rosetta 2 service very often.

Wait a second. If an Intel-based app is being translated into ARM as you’re using it, doesn’t that slow it down?

Yes- kind of. Technically, these apps are running slower than their ARM counterparts, and in some cases, the difference is very noticeable. As more apps get updated for the M1, you’ll no doubt notice big performance boosts in these apps.

However, that doesn’t mean that Intel-based apps are “slow” on the M1 chip by any means. In fact, many of them run faster than they ever did on an Intel processor. This is due to the insane amount of power Apple has managed to get out of the M1 chip.

So if you’re on a non-M1 Mac and you just realized that all of your apps are still running on Intel, don’t let that dissuade you from picking up an M1 Mac. The difference is minimal, and besides, most of these apps are going to be updated soon. Buy the new shiny Mac and enjoy lightning-fast performance from all of your apps, whether they’re ARM or otherwise.