You are here: Home / iPhone / Is Your iPhone Battery Degrading Normally? Here’s What to Know

When batteries degrade, they can cause all sorts of problems for your iPhone — from reduced battery life to performance issues.

This is an especially pertinent topic in the aftermath of the Batterygate fiasco and the introduction of battery health tools in iOS 11.3. In the new Battery section, users can see what percentage of their battery’s original capacity remains.

But while this is great for transparency, it can also lead users to worry unnecessarily about whether their iPhone batteries are degrading “normally” or if something is amiss.

If you only read one sentence of this article, read this one: Stop overthinking about your battery capacity.

With that being said, it may be helpful to know a little bit more about iPhone batteries, how they degrade, and how to keep yours at peak performance for longer.

How to Read the New Battery Usage Reports in iOS 12

What Happens if Batteries Degrade?

Apple defines an officially degraded battery as any one that contains less than 80 percent of its original battery capacity.

A degraded battery will no longer be able to pump out the same amount of power as a fresh one. That can cause problems during times of peak power draw, such as when you’re running CPU-intensive applications.

In some cases, hitting that peak power threshold will cause an iPhone to randomly shut down. 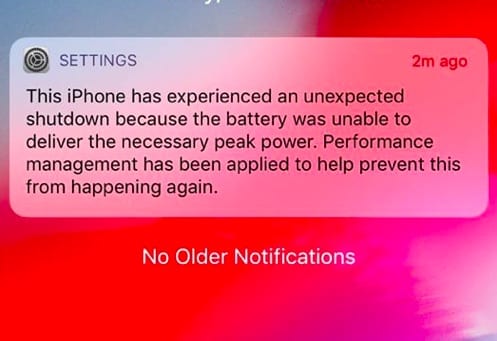 Of course, Apple has baked in a failsafe to prevent random shutdowns: power throttling. By slowing down the performance of your iPhone, there’s less demand on the battery and less chance of a random shutdown.

In recent versions of iOS, Apple has given users the option of turning off power management. This will result in more random shutdowns in severely degraded batteries. Users will need to weigh the pros and cons of each themselves.

What’s a Normal Rate of Degradation? 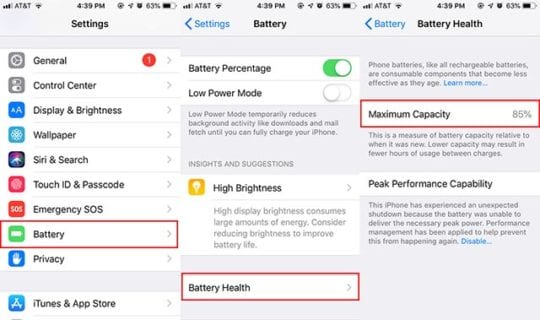 Apple says that it should take about 500 complete charge cycles for a fresh battery to degrade to 80 percent.

A charge cycle is defined as a device that’s completely charged being depleted to 0 percent.

Of course, partially charging your iPhone from whatever point it’s at will eventually add up to complete charge cycles.

Based on some rudimentary math, a degradation of 1 percent of battery capacity per month may be normal. That’s if you frequently use, deplete and charge your smartphone.

But, again, so much of this is variable that it’s hard to give a concrete number. Your mileage may vary drastically.

What Makes Your Battery Degrade

Essentially, anything that will run through your iPhone’s battery quickly can degrade it, since you’ll be using up your charge cycles.

Power-hungry apps like those that use Background App Refresh and Location Services are common culprits.

As far as other factors, they’re pretty varied, too.

For example, if your smartphone gets too hot while charging, it can irreparably damage your battery — in turn, reducing your battery’s overall lifespan and capacity.

A good tip is to take off any case on your iPhone before charging and to ensure that you never charge your iPhone in the sun or in hot ambient temperatures.

Some users report faster battery degradation when using USB-C fast charging, while others claim leaving your iPhone on the charger for too long can sap battery capacity.

8 iPhone Battery Saving Tips That You Must Know

Because of the way charge cycles work, keeping your battery from being depleted too fast can lengthen its lifespan.

In other words, battery saving tips will help. Here are a few of our favorites that you should keep in mind.