You are here: Home / How-to / How to Stop Your Mac From Updating to macOS Big Sur

New software releases can be fun, even for those with older devices. The last few years haven’t been the greatest when it comes to the Mac, however. macOS Catalina was plagued with bugs, and then Apple surprised everyone with a complete overhaul with macOS Big Sur.

Software updates are designed to fix bugs, patch security vulnerabilities, and bring new features to the masses. But with a track record as spotty as we’ve seen in recent years, it’s easy to understand why some may be hesitant to upgrade their Macs, especially if everything has been working just fine.

When Big Sur was initially introduced, there was a lot of hemming and hawing about what this meant for macOS on the whole. That is, until Apple shared “One More Thing” at the end of WWDC revealing that Apple Silicon powered Macs were on the way. The reason for the hesitation was due to the updated interface which seemed more like iOS or iPadOS and less like macOS.

Now that the M1-powered Macs have arrived, there’s a bit better understanding as to why the interface has changed. A large part of the new Control Center and UI elements has to do with the compatibility with iPad and iOS apps on Big Sur.

Essentially, Apple is inching closer and closer to a unified operating system for all of its devices. At least, that’s what it looks like from our perspective. Catalyst apps are everywhere in Big Sur, ushering in uniformity between the Mac apps and their iOS counterparts. Notification Center looks just like it does on the iPad, and you can even take advantage of the new widgets on your Mac.

But there’s also a more fine-tuned focus on privacy, as evidenced by the new App Privacy section in the App Store. This is found at the bottom of each app listing, and reveals what data and information is collected and/or shared. Safari has also introduced a slew of new privacy and tracking features to help keep you informed.

Why would you want to stop the update to macOS Big Sur?

Although Big Sur has been available to everyone for the last few months, there are still some valid reasons as to why you may not want to update. For one, the update to macOS Big Sur is one of the biggest updates that Apple has released for the Mac. There are a slew of new UI changes, along with how your Mac looks and feels.

It also appears that there are a few instances of bugs still being present, which can limit how you interact with your Mac. One example of the inability for the Apple Watch to authenticate accounts from your wrist. It may not seem like a big deal, but these little bugs are the things that add up and cause frustrations on a daily basis.

How to stop your Mac from updating

Regardless of the reason why, if you want to stop your Mac from updating to Big Sur, you aren’t out of luck. Well, at least not yet. Apple is implementing tools in the software that will eventually “force” users to update to the next software version.

Reasons for this include the various security and vulnerabilities patches that are included with software versions. You definitely don’t want malicious software to work its way into your Mac, and these “point” releases usually do the job.

Another reason is to cut down on the number of supported devices. Apple has a fantastic track record of supporting devices for quite a long time, and that stretches to both the iPhone and the Mac. But if new features are to be made available, and major software versions are to be released, Apple needs to deprecate older models with less-powerful hardware. So updating to a new software version can spell the end of official support from Apple for your aging Mac.

There are a few different methods for attempting to disable the annoying “Upgrade Now” notifications from appearing. Some are pretty easy, but others require you to dive a bit deeper and get into Terminal.

This will disable automatic updates from being downloaded and installed on your Mac. But that is primarily just for major new updates. If you want some more fine-tuned control, there are a few more options available. 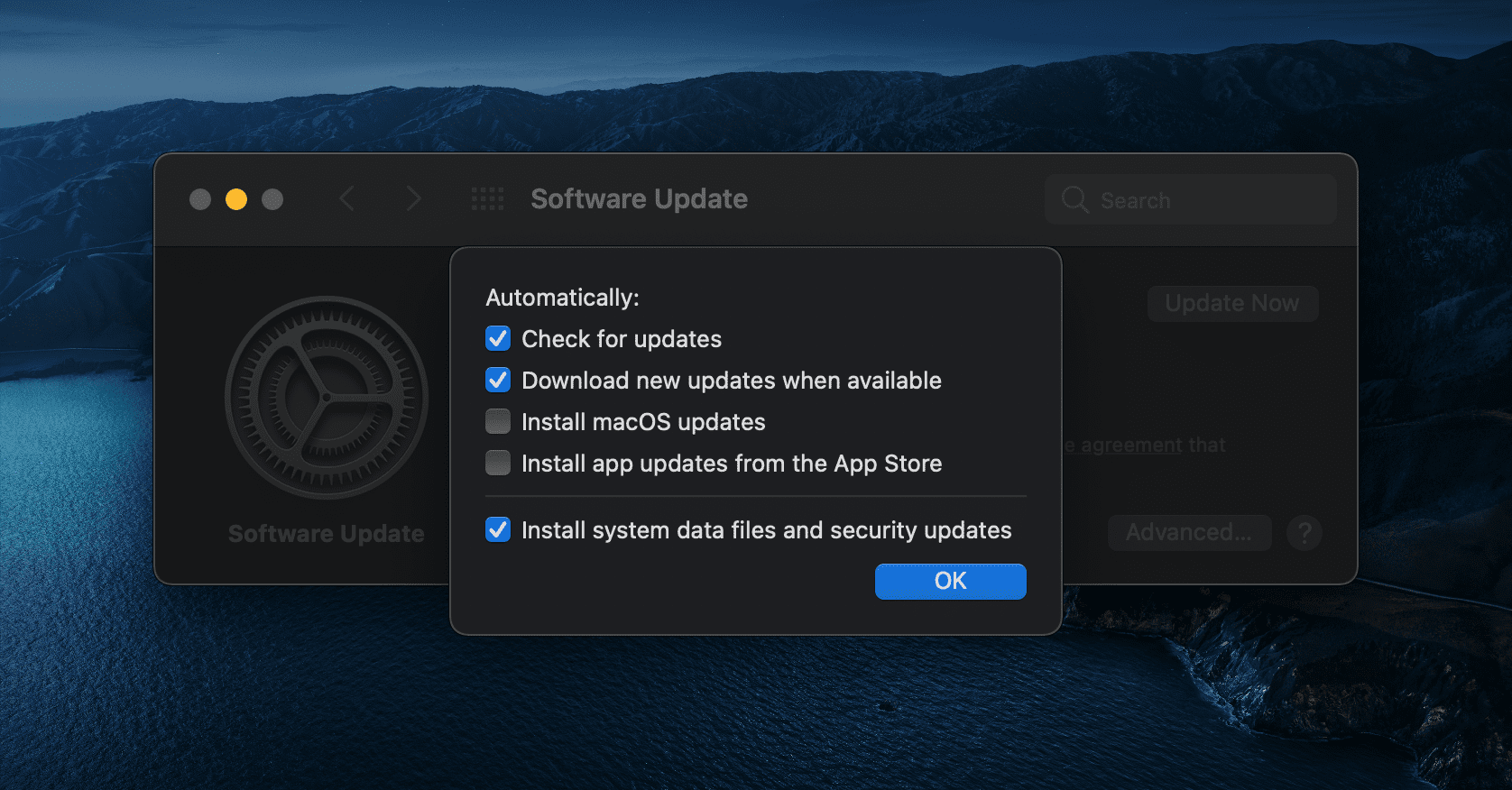 For reference, this panel has options to disable automatic actions for the following:

Truth be told, going through the System Preferences method does not guarantee that the Big Sur notification won’t stop appearing. If you want to dive a bit deeper, there are a couple of Terminal commands that can be entered in an effort to stop the notifications from appearing. 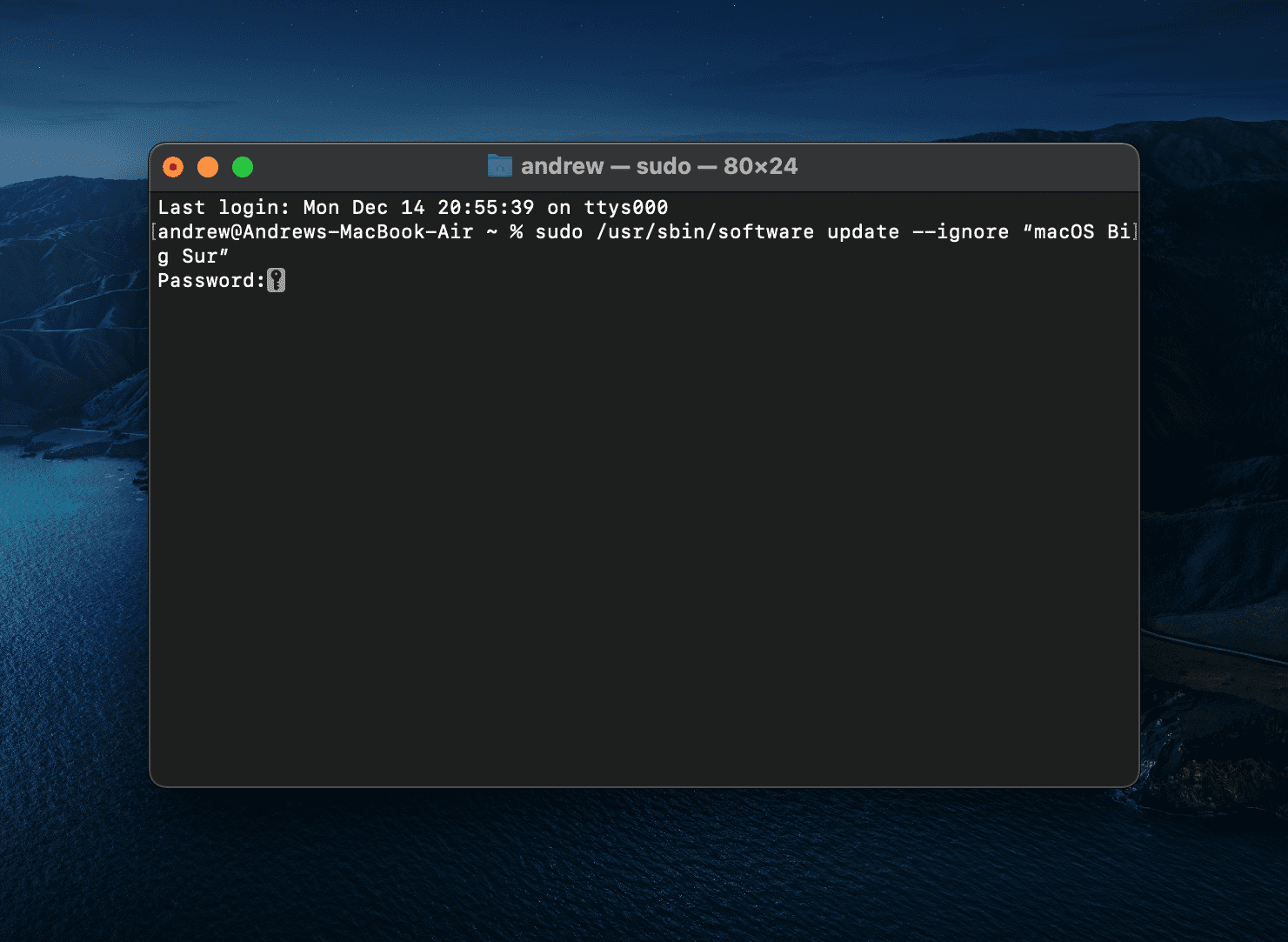 If entered correctly, you will no longer have to worry about the prompt appearing to upgrade to Big Sur. However, there’s another, albeit less successful, Terminal command you can enter if the previous option does not work for you. 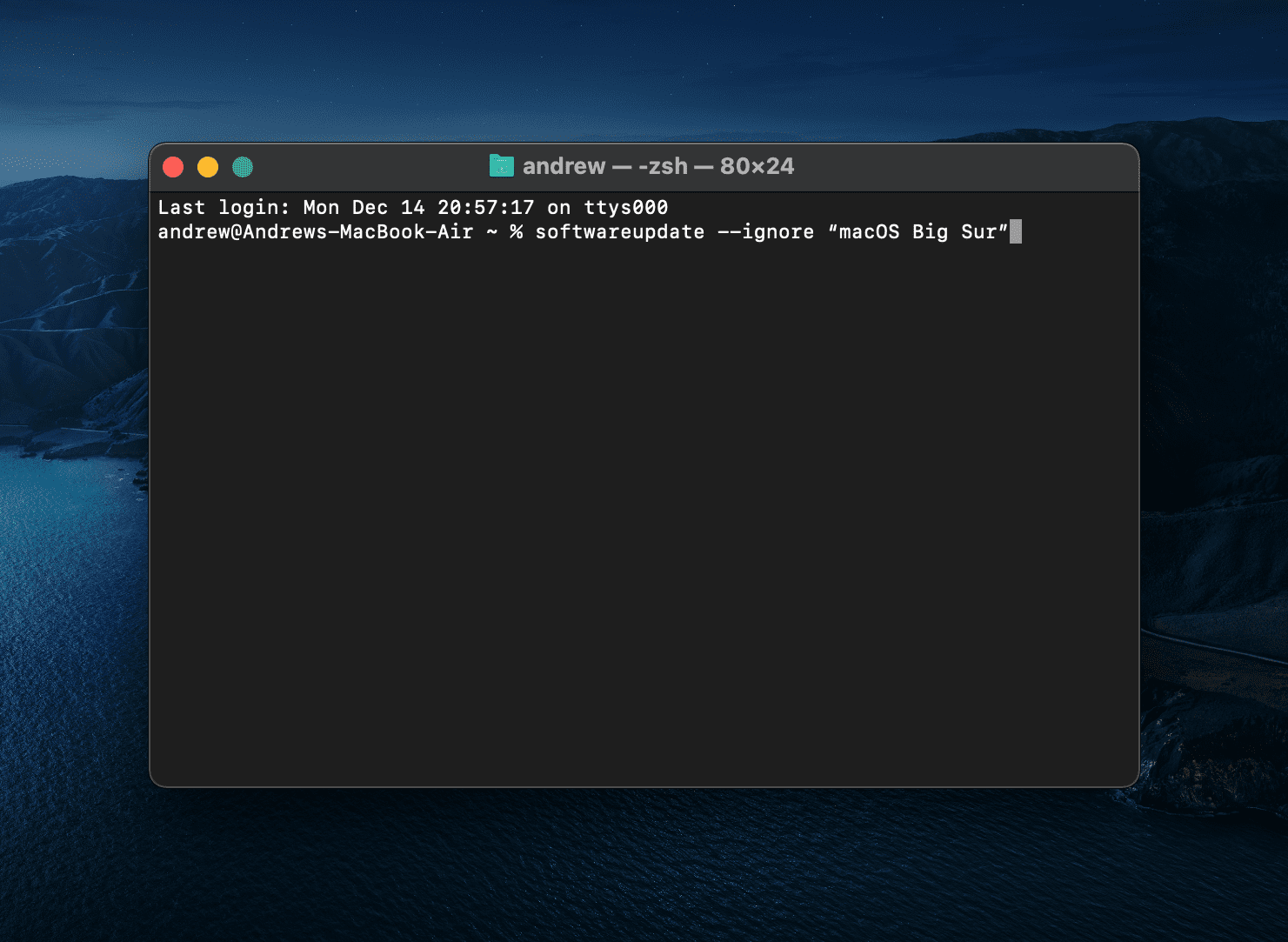 If entered correctly, you will see the following:

However, there are a few requirements that need to be met if you want to be able to hide the prompt. Your Mac must be enrolled in one of the following:

If your Mac is not enrolled in one of the aforementioned programs, then you will not be able to block the update prompt.

For a few years, there was an application available for download which stopped updates from happening. Of course, this was not available through the App Store, but instead, it lived on GitHub. App Blocker would block applications from updating automatically, including the software updates.

That app has been deprecated, and has not been actively developed for a few years. However, a new app has made its appearance on GitHub by the name of Big Sur Blocker.

Instead of blocking software updates for an array of apps, this application serves one purpose and that’s to block Big Sur from beginning its update. And if there’s more that you’re concerned about when it comes to downloading an app from GitHub, there’s a lovely explainer right on the main landing page.