You are here: Home / Reviews / The Best Safari Ad Blockers For macOS and iOS

Today, we’re going to be talking about something everyone can get behind: Safari ad blockers.

If you don’t know, an ad blocker is an app that hides advertisements while you browse the web. Most websites have ads on them (it’s where a lot of revenue for certain types of websites comes from). For instance, there are ads here on AppleToolbox, though we try to keep them pretty minimal!

On other websites, however, you’ll get popups, auto-playing videos, obstructive ads, and notifications to pay for additional content.

Not only is this annoying, but it can slow down your device’s performance. Safari ad blockers will hide ads or prevent them from loading altogether. This can boost performance while reducing annoyance.

In this post, I’m going to cover some of the best ad blockers for Safari on macOS as well as on iOS and iPadOS. Without further ado, let’s get into it!

First, we’re going to cover the best Safari ad blockers on Mac. There are more high-quality options for macOS, so you can’t go wrong with any of these. Some are free, offering a minimum amount of blockage, while other paid options will completely erase ads from your online experience.

Let’s start with the best.

Yep, Wipr is generally considered to be the best ad blocker for macOS. Anywhere you go online, you’ll see users suggesting and touting it. It only costs $2 on the Mac App Store, which is a pretty minimal price considering how much use you’ll get out of it. 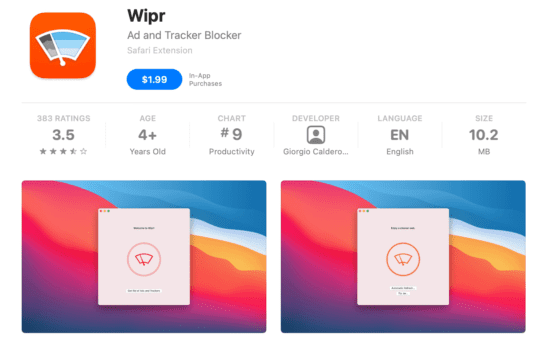 Another perk of Wipr is that it’s super private. It can’t track your information, so it couldn’t even track your data if it wanted to. It only takes a few seconds to set Wipr up, and then after that, it’ll run itself in the background. Updates, blocking, and more will all be managed for you.

Next up on our list of Safari ad blockers is Ghostery Lite. This is a pretty popular option, though I would consider it to be average. It’ll provide you with decent ad blocking around the web without charging you anything.

What makes this app good is how simple it is to use. If you want a free, no-frills ad blocker, Ghostery Lite is the way to go.

However, this app doesn’t have much to offer beyond that. Tech-savvy users tend to find this app a bit lacking. It doesn’t have a lot of configuration available, so you have to take the blocking it comes with and accept that. But for those that don’t want to spend too much time finding the right ad blocker, Ghostery Lite is a fast solution.

AdGuard is the app on this list of Safari ad blockers that I use. I’ve tried a few of the others on this list and haven’t come across anything that replaces AdGuard without spending money. 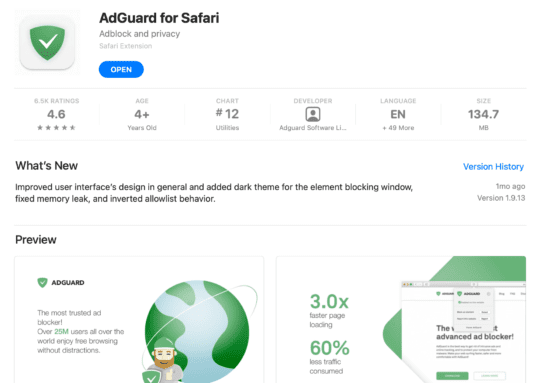 AdGuard has an edge over ad blockers like Ghostery Lite because it operates as a fully functional app. It’s not just a Safari extension. This means that you can choose what AdGuard does and doesn’t block, you can whitelist websites, and you can create custom rules for each website.

This app also allows you to block specific elements of a website. This is helpful for when AdGuard misses an ad (not very often) or to block something you just find annoying. The one complaint I have with AdGuard is that the app runs a little slow. It doesn’t slow down Safari at all, but changing toggles and such lags at times.

The Quiet Content Blocker fills in a strange gap on our list of Safari ad blockers. Mainly because it’s not a true ad blocker – you’ll still see some ads while using this app. 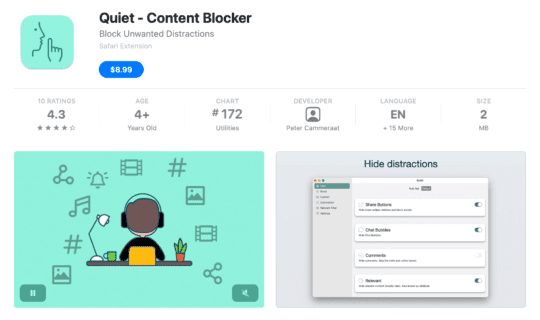 Instead, Quiet Content Blocker helps block out annoying elements of websites. This includes share buttons, comment sections, chat bubbles, “relevant” tabs that are just sponsored results, and anything else that gets in your way.

You can also use Quiet to block certain apps on your Mac, not just websites! This is particularly helpful if you’re someone (like me) who gets easily distracted by social media and games on your Mac.

Last up on our list of Safari ad blockers for Mac is AdBlock for Safari. While the name is a little generic, this app is separate from the rest of the ad blockers on this list. 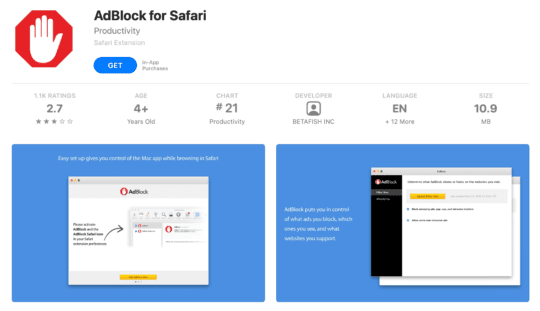 This is an immensely popular app, with around 60 million users, and while I don’t think it’s in the same league as Wipr or AdGuard, it’s pretty solid. It’ll block ads on sites like YouTube and Facebook, as well as prevent general ads across the web.

This app is a straightforward, simple solution, somewhere between AdGuard and Ghostery Lite. If you’re looking for something more robust than Ghostery Lite but not as fully-featured as AdGuard, this is the one.

With the best Safari ad blockers out of the way, it’s time to move on to the options for iOS and iPadOS. These options are generally going to be less robust than their Safari counterparts. There are also fewer options that don’t suck. However, the good ones get the job done super well. Let’s start with a familiar face!

That’s right, AdGuard has a spot on both of our lists. That’s because it’s just that good! 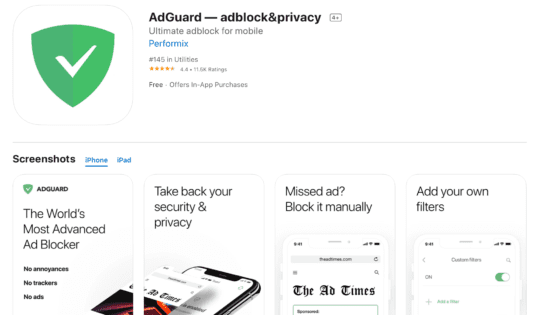 Just like its macOS counterpart, AdGuard is free and offers a lot of flexibility. You can set custom filters, block specific elements, and see who’s been tracking you.

There’s not much else to say here – it’s a solid, secure option for everyone. I’d recommend it to most people reading this post.

Next up is AdBlock Pro, another app that easily makes to on this list of the best Safari ad blockers. This is a super robust option that removes ads of all kinds from all sorts of websites. It isn’t as flexible as AdGuard is, but by default, it’ll hide a lot more annoying content. 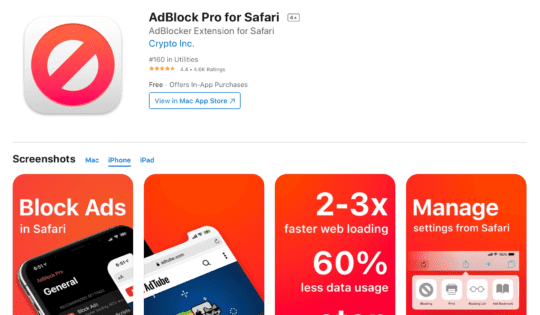 AdBlock Pro is free, though premium features will be blocked behind a paywall of $10/year. That’s pretty minimal (just $0.02 per day), so I don’t consider this a drawback at all.

The premium features include country-specific ad blocking, the ability to enable multiple blocking categories at once, and blocking filters that automatically update in the background.

If you’re someone who wanders into sketchy sites often and doesn’t want to have to configure your ad blocker yourself, AdBlock Pro is for you.

Out of all of the options on this list of Safari ad blockers, I think AdBurn has the best interface. It’s straightforward and classy. Just a list of switches allowing you to choose which elements you want to block in Safari and which you don’t. 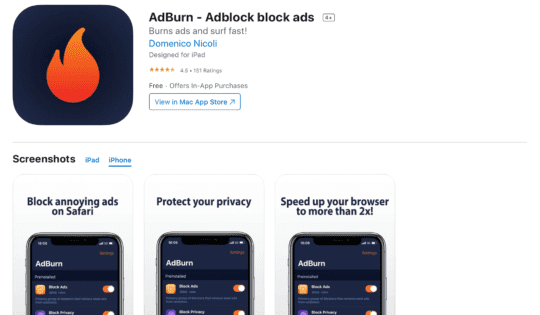 AdBurn also has the benefit of being designed for iPad. While it does have a solid iPhone app, it’s a better iPad option than many of the others on this list.

The one drawback of AdBurn is that it’s pretty lightweight. While it blocks a lot of stuff, it doesn’t offer many features beyond that. Whitelisting, specific element blocking (such as in AdGuard), and other features aren’t going to be found here. If you like its look, though, then go for it!

Blockify is the one-stop, one-touch option for those who want to set and forget their Safari ad blockers. It offers no customization, features, options, anything. You just install it, turn it on, and forget it exists. 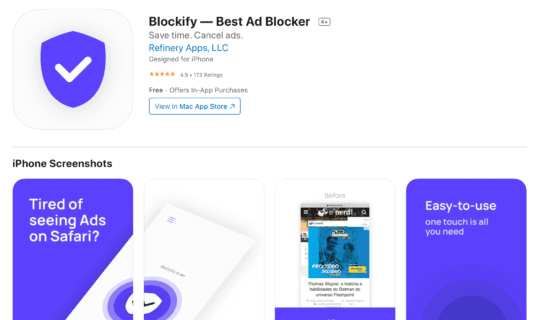 For some users, this is perfect. You don’t have to figure anything out or make any decisions. However, other users might find it a bit lacking. The one-touch setup will feel limiting for some while for others it’s a relief. It just comes down to your preferences!

I do have to give Blockify a knock, though, as it doesn’t offer an iPad version. This one is just for iPhone users! Also, for some reason, when you search for it in the iOS App Store, the App Store corrects your search to “Blockfi”, so you don’t see this app. Blockify is in the App Store – you just have to dodge this behavior.

Last up on our list of Safari ad blockers is Magic Lasso. This app makes a lot of blog claims, like doubling your battery life and browsing speed, blocking all ads, and preventing popups. 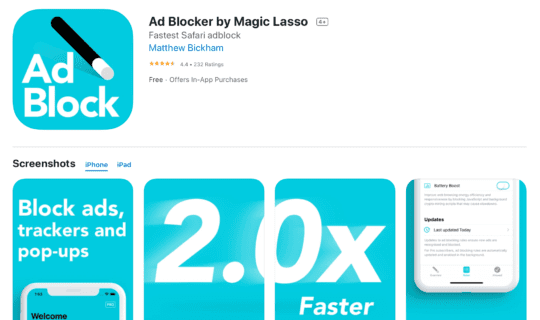 And for the most part, Magic Lasso can back these claims up! It’s a super solid app with a beautiful design. It uses native Safari APIs to maximize performance and automatically updates its blocklists for you.

Another interesting feature of Magic Lasso is that it will automatically whitelist apps that the community frequently whitelists.

The one drawback of Magic Lasso is that a lot of its features are behind a paywall. It’s $2.50/month or $29/year, depending on how you want to pay. This is a little steep for an ad blocker, but it’s a solid one.

And that’s it! Those are the best Safari ad blockers for Mac, iPhone, and iPad. I’ve used many of these and while I have my favorites (Wipr and AdGuard) I think it all comes down to finding the one that’s right for you.

For more articles on everything Apple, check out the rest of the AppleToolBox blog. And if you want some tips on keeping your data private, check out this post.