You are here: Home / Apple TV / Use these Shortcuts on your iPhone to easily control Apple TV

When Workflow burst onto the App Store, there was little confusion that this would open so many doors for iOS power users. Then, Apple acquired the application and those hardcore users were worried the doors were closed. With iOS 12, those concerns were removed with the launch of Shortcuts, which was simply Workflow with direct iOS integration.

Now that iOS 13 is here, Apple upped the ante again as Shortcuts is now fully integrated and is pre-installed. This app is so powerful in so many ways, and now you can even control Apple TV with ease.

What’s new with Shortcuts in iOS 13?

Although Apple launched Shortcuts with iOS 12, there were quite a few features “missing” that users were looking for. Many of those were added with the launch of Shortcuts pre-installed on iOS 13 devices. Here’s a quick breakdown of what’s new:

There are so many new features in Shortcuts with iOS 13 that your head may spin. However, if you step back and take the time to dive deeper, you will find so many awesome new features.

Use Shortcuts to control Apple TV

That brings us to the Apple TV, which is also seeing an update with tvOS 13. This update has quite a few new features, including support for TV+ which launches this Fall. Plus, Apple includes a face-lift to the interface itself for easier navigation.

But perhaps the most exciting integration comes with Shortcuts as you can now control Apple TV from the Shortcuts app. This functionality was released with the first iOS 13 Beta and has been fine-tuned since then.

Currently, these are the Shortcuts that you can create to control Apple TV:

In earlier versions of iOS 13, some users had the ability to open a specific application on the Apple TV, along with launching the TV app from a Shortcut. Apple has seemed to remove these, and we aren’t sure if they are just temporary, or if we will see more options added in the final release.

How to create the Apple TV Shortcut

On one hand, you could think Apple would automatically add these Shortcuts to the main page for Apple ID’s that tied to an iPhone and Apple TV. On the other hand, we don’t want another U2 album situation where Apple adds things for users that it thinks they want.

It’s extremely easy to create a Shortcut to control Apple TV, as you don’t need to build it from scratch. Here are the steps to create an Apple TV Shortcut:

Once the Shortcut is populated, there is another step that you need to take. In order to make sure that Shortcuts is communicating with your Apple TV, you need to select the proper one.

When the Shortcut is created, the phrase “Apple TV” is highlighted, so just tap on that. From there, your iPhone will search for any Apple TV’s and then you can select the one you want to control. Or, you can have Shortcuts ask you each time in the event that you have multiple devices that need to be controlled.

That’s it! Just go back and follow the steps to add more Shortcuts to control Apple TV from your iPhone.

What are the limitations?

As one can expect, you can’t just turn to Shortcuts as the replacement for your TV Remote or the Remote app. Earlier, we stated that Apple was beta testing additional features, but these have since been removed. 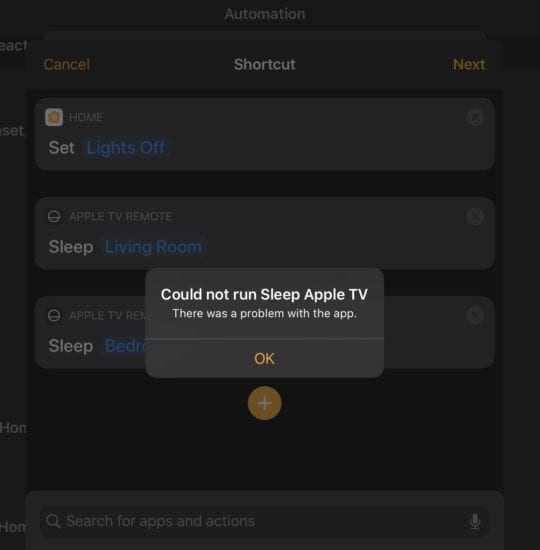 These include opening the TV app or a specification application from Shortcuts on your iPhone. But it also seems that some users have been running into issues when trying to create Scenes for HomeKit and integrating the new Apple TV Shortcuts.

The only error message that appears is “There was a problem with the app.” Hopefully, there is just a switch that Apple needs to flip on the backend to turn this into a reality. Being able to set a HomeKit Scene to turn off the lights in your living room, then have the Apple TV opened to a specific app would be amazing.

iPadOS has been garnering much of the attention ever since its announcement at WWDC ’19. However, for non-iPad owners, the various updates to the Shortcuts app and tvOS should have people more than excited to dive in and see what’s possible.

Let us know if you have run into any issues when creating these Shortcuts and we’ll do our best to help sort them out. In the meantime, let us know what your favorite features for iOS 13 are, or share some of your favorite Shortcuts in the comments below.