You are here: Home / iPhone / You can now report traffic or police speed traps on Google Maps for iOS 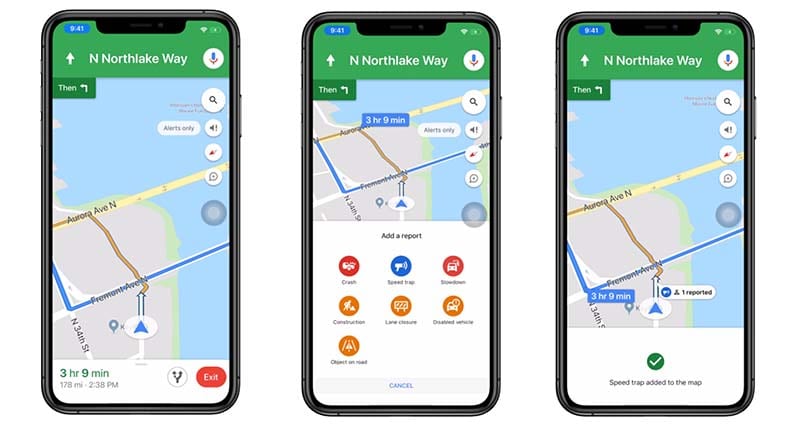 The world’s most popular navigation app just got a nifty but controversial new feature that could help you avoid a ticket.

Users of navigation app Waze, which is found by Google, may find this feature familiar. Waze has long had the ability for users to see and report traffic obstacles and police.

Google, it appears, has simply ported that functionality over to its more-popular Google Maps platform on iOS. (Android users already had access to this feature on Google Maps.)

It does differ in a few key areas. The Google Maps report function doesn’t allow users to report police or traffic cameras like Waze. Google Maps users are also unable to add specific comments about the hazards or police presence.

Is this a good thing?

Is this feature ethical or safe? That’s really up to you to decide.

In fact, the New York Police Department penned a letter to Google back in February asking the company to take down the feature on Waze.

Google, for its part, cites free speech and privacy as reasons for the feature’s continued existence.

In a statement, it also said that safety is a “top priority” for the feature and that it believes revealing speed traps to users may “allow them to be more careful and make safer decisions when they’re on the road.”

How to use the new Speed Traps feature on your iPhone

The new reporting functionality is extremely simple to use — just like on Waze.

To see reports, all you need to do is fire up Google Maps, input a destination and start driving. If other users have submitted a report, you should see it on your route.

Submitting a report yourself is just as easy. Just tap the small Report icon on the right side of the screen.

You’ll be brought to a new pane where you can submit reports of the following driving incidents:

Apple Maps has long had a poor reputation. But the company has worked hard to improve Apple Maps over the past couple of years. Part of that has been introducing new features that have already been implemented in Google Maps, such as the “Look Around” function in iOS 13.

Despite that, Google Maps is still the most popular navigation platform with nearly 67 percent of the market share back in 2018.

Because of that, it may only be a matter of time before Apple debuts its own report feature on iOS. That is, of course, based on whether it’s willing to deal with the controversy of it.